Physical natural gas for Friday delivery gained ground in Thursday’s trading as an abrupt cool-down was forecast to bring eastern points off their recent abnormal highs closer to seasonal norms. 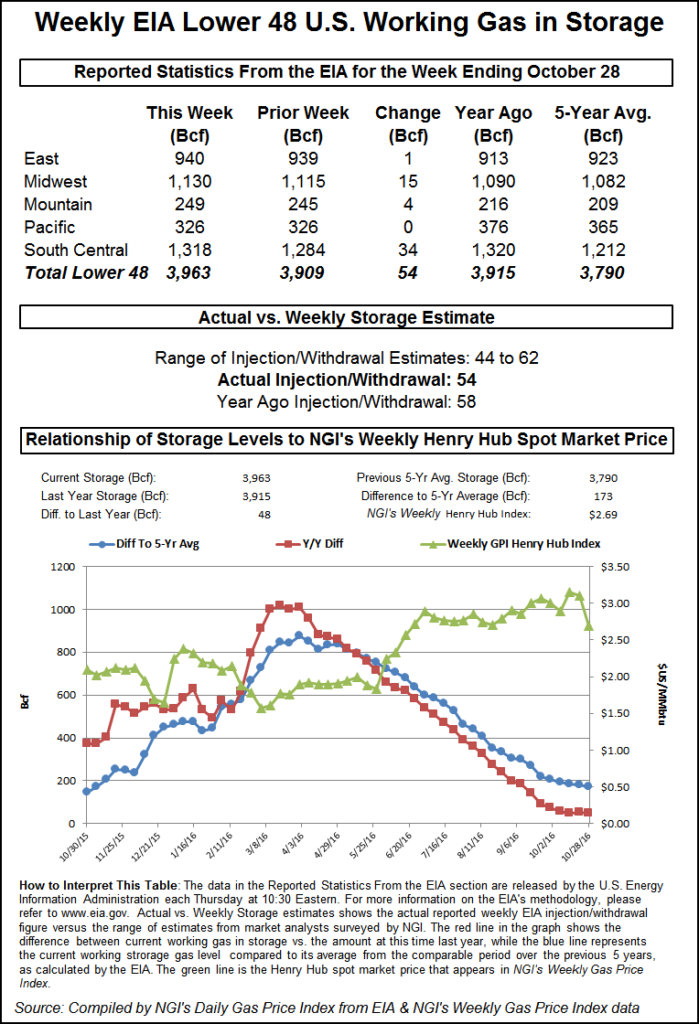 Gains at most major production zones, along with strong Midwest market points, were able to offset a weak Appalachia and flat Southeast, and the NGI National Spot Gas Average rose 9 cents to $2.15.

The Energy Information Administration (EIA) reported working gas inventories rose by 54 Bcf, about 2 Bcf less than market expectations, and at first futures prices made nominal gains. Subsequent trading saw the market retreat, but not at the frenetic double-digit decline seen earlier in the week. At the close, December had fallen 2.3 cents to $2.769 and January was off 2.9 cents to $2.949. December crude oil continued to struggle falling 68 cents to $44.66/bbl.

December futures reached a low of $2.788 immediately after the storage figures were released by EIA, but by 10:45 a.m. EDT December was trading at $2.808, up 1.6 cents from Wednesday’s settlement.

“The market seems to be trying to find some base,” a New York floor trader told NGI. “I look for some sideways movement in here with some scale-in buying with caution. Now that we are down here, there is a little caution in finding support.”

“The 54 Bcf refill was slightly below the median expectation and less than the 62 Bcf five-year average, and so at least modestly supportive on a seasonally adjusted basis,” said Tim Evans of Citi Futures Perspective. “At the same time, we don’t think this will change the market’s recent bearish dynamic, with the forecast for warmer-than-normal temperatures still pointing to weak early season heating demand and further storage injections in the weeks ahead.”

Inventories now stand at 3,963 Bcf and are 48 Bcf greater than last year and 173 Bcf more than the five-year average. In the East Region 1 Bcf was injected and the Midwest Region saw inventories increase by 15 Bcf. Stocks in the Mountain Region rose 4 Bcf, and the Pacific Region was unchanged. The South Central Region added 34 Bcf.

“A combination of the current very warm pattern and the tropical forcing (Madden-Julian Oscillation) indications favor warmer risks continuing through the next 12 days at least with the warmest focus vs. normal from the Midwest to Calgary. The East Coast is a battleground at times with quick sneak-attack brief coolings that mainly manage to bring them back to normal for brief interludes.”

Physical traders were forced to temper bearish expectations as forecasters called for a shot of cooler, though not cold weather to drop down through the Mid-Atlantic to as far south as Florida by the end of the week. AccuWeather.com meteorologists said, “The record heat that baked the southern United States since last week will be slashed by a push of cooler air on Friday. The cooldown will make it as far south as Florida during the first half of the weekend.”

“A cold front dropping quickly through the country will push across the Southeast through Friday,” AccuWeather.com Meteorologist Faith Eherts said.

“Temperatures will return to seasonable levels in the front’s wake. The record heat that baked the southern United States since last week will be slashed by a push of cooler air on Friday. The cooldown will make it as far south as Florida during the first half of the weekend.

“Highs will quickly trend downward by 10 to 20 degrees Fahrenheit in most locations from the lower Mississippi Valley to the Southeast coast. A northeast breeze will pick up behind the front, ushering in the much cooler air,” Eherts said. “Highs in the 80s F will be replaced with highs in the upper 60s to middle 70s from Raleigh, NC, to Nashville, Atlanta and Montgomery, AL, by Saturday. The air mass will not pack quite as much punch by the time it reaches Florida, but temperatures will fall noticeably on Saturday.”

“It’s a pretty big day because you had all this aggressive selling and it just stopped. Remember the two non-trend days near the last topping reversal pattern? [Oct. 17, and Oct. 19]. Also, Cal’17 and Cal’18 strip prices are now oversold.”