Linn Energy Inc., which emerged from the commodity price downturn smaller but still energized, on Wednesday agreed to combine forces with a private operator to create Roan Resources LLC, whose goal is to accelerate development in Oklahoma’s prolific Anadarko Basin. 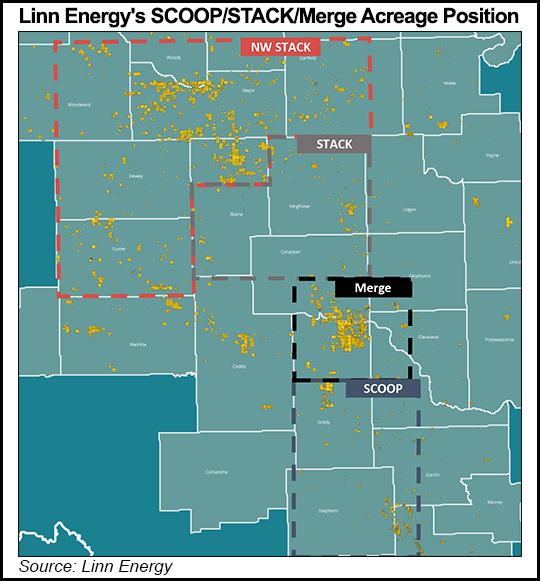 Roan would have acreage within the Merge prospect and Oklahoma’s two ubiquitous reservoir formations, the SCOOP and STACK, aka the South Central Oklahoma Oil Province and the Sooner Trend of the Anadarko Basin, mostly in Canadian and Kingfisher counties.

According to the partners, Roan would be the “first of its kind Merge/SCOOP/STACK pure play,” created with “significant contiguous size and scale” to accelerate growth and become a basin consolidator.

“The combination of our assets, experience and talented teams creates a unique, premier pure play company in one of the most prolific producing regions in the country,” stated the companies’ boards. “Roan is well positioned to grow production, reserves and value for many years to come as it develops the vast resource potential of its acreage in the Merge/SCOOP/STACK play.”

Privately held Citizen to date has focused its efforts in the Midcontinent, and in particular the Anadarko Basin. The explorer is backed in part by JVL Advisors LLC and its managed funds.

Under the agreement Linn is retaining ownership and control of the expanding Chisholm Trail midstream business, as well as 105,00 net acres in the northwestern area of the STACK.

Linn emerged from Chapter 11 in late February as a reconfigured exploration company, and it has been selling off chunks of its massive land holdings. Linn still controls a wide swath of acreage nationwide, but of late, the independent has concentrated its efforts in the SCOOP/STACK, where it has about 185,000 net acres.

In the Merge prospect, Linn has about 49,000 net acres and operates a 60 MMcf/d refrigeration plant now being expanded to 250,000 MMcf/d. Linn’s contributed acreage in Roan still would be dedicated to Chisholm Trail.

Linn and Citizen now operate a combined five rigs in the Merge with plans to drill a total of 58 gross wells this year. Combined production was more than 20,000 boe/d in May. At the current rig count, the exit rate in 2017 is forecast at 40,000 boe/d-plus. The total estimated resource potential is said to be more than 2 billion boe.

Roan’s field level cash flow margin is estimated at about $18/boe, assuming prices of $45/bbl for oil and $3.00/MMBtu for natural gas.

According to the partners, Roan would begin with more than 1,500 net drilling locations, representing 20-plus years of development, assuming a six-rig program. An initial public offering is expected in early 2018, depending on market conditions.

Roan, expected to have no debt at closing, would have independent management and a separate board of directors comprised of four directors each appointed by Linn and Citizen. The to-be-appointed CEO would be designated jointly.

“Roan is actively recruiting an executive management team with a focus on accelerating development materially over the next 18 months,” the partners said.

The transaction is expected to close by the end of September. During the transition period, Linn and Citizen plan to work together to optimize operations on their respective assets.