Newfield Exploration Co. has pushed its Oklahoma’s stacked reservoirs to the head of the line after making a deal to sell almost all of its Texas portfolio, including Eagle Ford Shale and conventional natural gas assets. 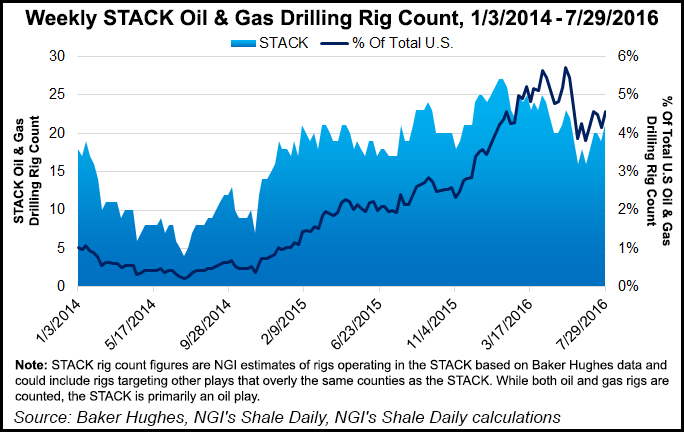 The producer said Wednesday it has signed two separate sales agreements worth nearly $390 million total, catapulting “substantially” all of its Texas assets. The Eagle Ford properties are being sold to Protege LLC; the other buyer was not disclosed.

The transaction, set to be completed before the end of September, is designed to cushion the balance sheet and free up capital to redeploy into the Sooner Trend of the Anadarko Basin, mostly in Canadian and Kingfisher counties, aka the STACK, CEO Lee K. Boothby said.

“We continue to refine our portfolio and focus our people and capital resources on assets with high returns and a deep inventory of future drilling opportunities,” he said. “Proceeds from the sale of our Texas assets will replenish our cash balance and position us for the timely acceleration of our STACK development in the future.”

Current production from the combined assets being sold is 12,700 boe/d net, 65% weighted to natural gas and liquids, 35% to oil.

Newfield was one of the first operators to make a big bet in the various stacked reservoirs of Oklahoma’s Anadarko Basin, and management has credited the strong well results as the primary reason for increasing full-year production guidance in June (see Shale Daily, June 22). On Tuesday Newfield boosted 2016 guidance yet again, with U.S. output now expected to be 53-54.5 million boe. Total company output guidance, which includes China operations, was raised to 58-59.5 million boe from 56-58 million boe.

Part of the reason for the higher production estimates is the addition of 42,000 net acres acquired from Chesapeake Energy Corp. in May, which added 42,000 net acres in the basin’s Meramec reservoir and lifted Newfield’s position overall to 350,000-plus acres (see Shale Daily, May 5).

Based on well performance to date, Newfield’s average type curves in the STACK also have been raised by 15% to 1.1 million boe gross, Boothby said.

“This increase is backed by the drilling of more than 100 wells to date — the largest sample set in the industry,” he said. “Our well results continue to improve as we optimize our completions and look for innovative ways to enhance returns in our upcoming full-field development campaign…We recently closed on our previously announced STACK acquisition and have allocated additional capital to these assets in the second half of this year. We remain excited about STACK and the play’s potential to drive our growth in production and reserves for years to come.”

Newfield also issued 2Q2016 results Tuesday. The company, headquartered in The Woodlands north of Houston, recorded a quarterly net loss of $667 million (minus $3.36/share), which was better than year-ago losses of $992 million (minus $6.09). The latest losses including an asset impairment charge of $522 million, hedging losses of $197 million and restructuring/severance costs of $12 million. Adjusted for one-time charges, net income was $64 million (32 cents/share). Revenue in 2Q2016 totaled $381 million on operating net cash of $306 million and discretionary cash flow of $228 million.

Production totaled 15.3 million boe in the quarter, 45% weighted to oil and 37% to natural gas. U.S. output contributed nearly all of the production at 13.7 million boe; China operations contributed most of the remaining. Capital spending has been increased to $700-800 million from $625-675 million, reflecting $40 million for two recent STACK pilots and $50 million for additional drilling in Oklahoma.