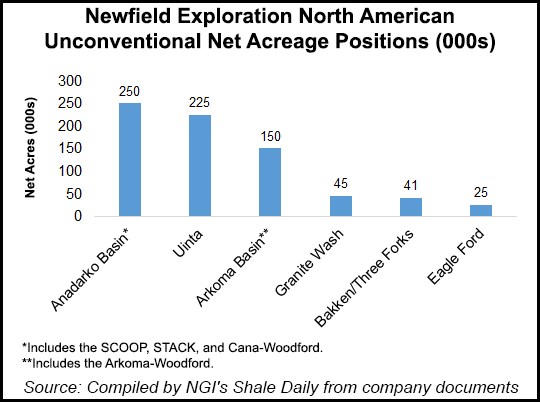 “We are executing extremely well across the company today, and this momentum is allowing us to increase the production and cash flow growth in our three-year plan,” said CEO Lee K. Boothby. “We are confident that the momentum we have generated in 2014 will be accretive to our three-year plan and our 2015-2016 growth outlook, as well.”

Newfield, which is focused on the Midcontinent, Rockies and Gulf Coast, raised its 2014 domestic capital budget by $100 million to $1.7 billion. The 2014 production forecast was lifted to 46.5-48.5 million boe from 44-48 million boe. An updated three-year plan is expected to be released by early next year, Boothby said. “Our outlook continues to improve and the changes we expect to make will be positive for our oil growth and cash flow projections and will improve our debt-adjusted growth metrics.”

In the meantime, Newfield also provided an interim update on recent acreage additions in the Anadarko Basin. Since late last year, Newfield has been adding acreage in its South Central Oklahoma Oil Province (SCOOP) and stacked pay zone (STACK) plays. Year-to-date, the company has added more than 25,000 net acres and now owns interests in more than 250,000 net acres (see Shale Daily, May 1).

The additional spending planned for this year is related to improved drilling performance and the addition of the Anadarko Basin acreage. “Due to continued operational efficiencies, Newfield today expects to drill up to 15 additional gross wells across its focus areas in 2014,” the company said.