Newfield Exploration Co. is considering the sale of its international assets, which consist of offshore oil and natural gas developments in Malaysia and China, the company said. 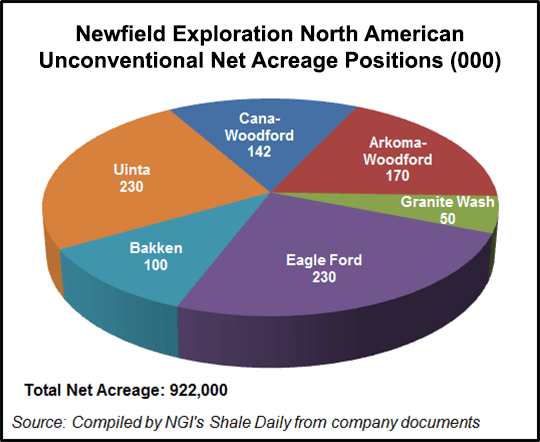 “This action reflects the confidence we have in our domestic portfolio and the substantial opportunities we see across our liquids-rich domestic resource areas, which include the Uinta Basin, the Cana Woodford, the Williston Basin and the Eagle Ford,” said CEO Lee K. Boothby. “Our company has evolved and adapted through the successful execution of a number of important transitions and we believe that now is the right time to become a North American-focused operator.”

Boothby said that during 2012 the company completed its transformation to an oil-focused company by growing liquids volumes, which are expected to account for about 55% of 2013 production.

“We are allocating substantially all of our capital to liquids-related projects, while we focus on improving our future returns and profitability,” he said. “Over the last four years, we have delivered a CAGR [compound annual growth rate] of more than 20% in domestic liquids production.”

Newfield said it is working with Goldman, Sachs & Co. on the potential international asset sale.

While the company will report 4Q2012 and full-year 2012 financial and operating results after market close on Feb. 19, Newfield did offer a preview Wednesday. The company produced 50 million boe in 2012, including 11.9 million boe in 4Q2012. Full-year production exceeded the company’s most recent guidance by about 0.5 million boe.

During 4Q2012 Newfield also incurred a noncash charge for deferred income taxes of approximately $550 million primarily related to the company’s focus on U.S. operations and its repatriation of accumulated profits from its international subsidiaries.

Newfield’s actions related to its international assets and year-end proved reserves will impact financial results for the fourth quarter of 2012. The company said it expects to report a net loss of about $1.2 billion or $8.80 per share.

Proved reserves at year-end 2012 were 566 million boe, down 13% from 652 million boe at year-end 2011. The decrease — partially offset by the addition of 86 million boe of reserves through the company’s active drilling programs — was attributed to low natural gas prices, the sale of nonstrategic assets in 2012 and produced volumes.

Looking ahead, Newfield said it plans to invest $1.7–1.9 billion in 2013, with the entire budget substantially allocated to liquids plays. Total company production is expected to range from 44-47 million boe. Newfield expects that its 2013 domestic liquids production will increase more than 35% while natural gas volumes are expected to decline about 14% from 2012 levels due to a continued lack of investment and natural field declines.

“We believe that our 2013 investments will result in substantial gains in Newfield’s liquids production growth and significant increases in our cash flow into 2014-15,” Boothby said.