Despite the expectation that New York’s top environmental regulator is days from announcing a ban on high-volume hydraulic fracturing (HVHF), supporters of shale development said they remain optimistic the ban will one day be lifted — holding out hope that someone will successfully sue the state over the ban, or a new governor will be elected. 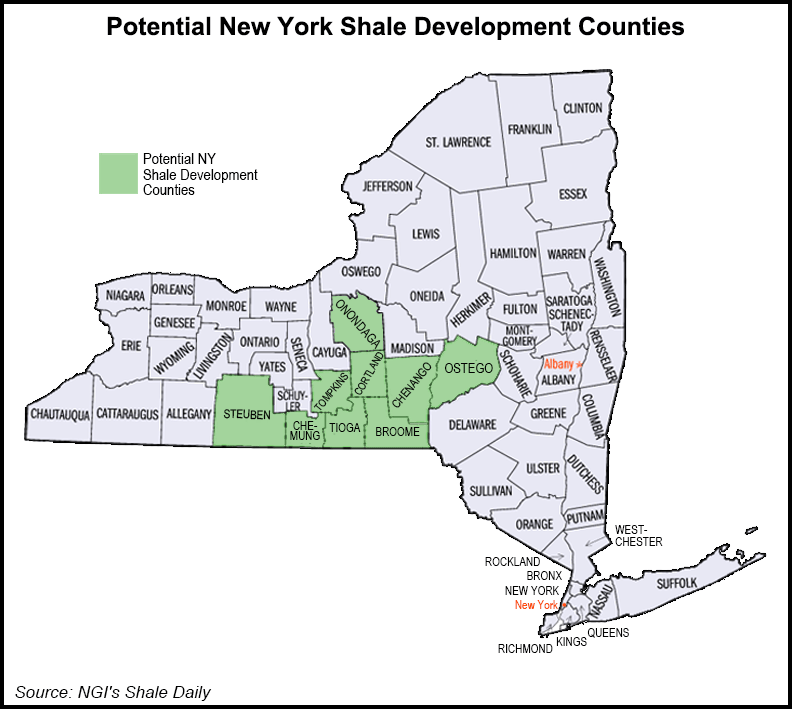 Even more tantalizing: the prospect that Democratic Gov. Andrew Cuomo could be possibly be driven from office by an anti-corruption probe he himself started. The probe, which has since been taken over by a federal prosecutor, has already ensnared the top two lawmakers under Cuomo.

On Wednesday, the state Department of Environmental Conservation (DEC) released its final supplemental generic environmental impact statement (SGEIS) on HVHF. The long-awaited report appeared to follow the narrative laid out last December by Cuomo, DEC Commissioner Joseph Martens and acting Department of Health (DOH) Commissioner Howard Zucker: that HVHF is too dangerous to be performed in the Empire State (see Shale Daily, Dec. 17, 2014).

In a 34-page executive summary, the DEC said it “concurs with DOH, as the uncertainty revolving around potential public health impacts stems from many of the significant adverse environmental risks identified in the SGEIS for which the DEC proposed and considered extensive mitigation measures.”

The DEC added that after considering a wide range of mitigation measures, “more and more area within the Marcellus Shale fairway would be off limits to HVHF. The additional restrictions and prohibitions…would substantially increase costs to industry, which would likely negatively impact the potential economic benefits associated with HVHF.”

Shale supporters say they expect as much from Martens, yet they remain undeterred.

“I only see two things that could reverse this: one, Cuomo gets out as governor to an industry-friendly governor, which isn’t going to be for three more years; or two, the industry prevails in any litigation over this,” Brad Gill, executive director of the Independent Oil and Gas Association of New York (IOGA), told NGI’s Shale Daily on Thursday. He said he knew of one “industry entity” and one “non-industry” entity that had filed suit against the state, but he declined to identify them.

Then there’s the Moreland Commission. Cuomo launched the probe in July 2013 and tasked it with investigating corruption within state government, but dismantled it in March 2014. After a backlash, U.S. Attorney Preet Bharara requested Moreland Commission documents for his own investigation into state officials.

“It’s fascinating,” Scott Kurkoski, an attorney with the Binghamton, NY, firm Levene Gouldin & Thompson LLP, told NGI’s Shale Daily on Thursday. “[Bharara] keeps talking about how, in New York, everything is decided by three men in a room: the governor, the Speaker of the Assembly and the Senate Majority Leader. And he keeps saying ‘stay tuned.’ So everybody now is thinking he’s going after the governor next.

“This is what we stay up at night dreaming about — that maybe our U.S. attorney will take this governor out.”

“It should happen, really,” Fitzsimmons said Thursday. “There’s so much that you see now coming out. I can’t see how he isn’t going to be [removed]. But we’ve got to wait now and see what the [DEC’s] findings are, and that’s going to be the real document that’s going to help us and see where we really can go.”

Gill concurred. “Martens did say that ‘anything can be reversed, nothing is permanent,’ and all that. But I just read the beginning of the executive summary of the final SGEIS and immediately it was nauseating to me. It’s a sad day, but we were expecting this. As far as I’m concerned, the corrupt political process here played out instead of true science and reason.”

Kurkoski said he believes that what Martens will announce in the coming days won’t amount to an outright ban in the technical sense.

“No one really knows what the findings will be, but my educated guess is that the DEC is not going to issue permits for HVHF until we have more information,” Kurkoski said. “That will be the conclusion. Everybody is talking about a ban, but I don’t really see it as a ban.

“Those decisions are over, but it’s fascinating that those cases made their way into this report,” Kurkoski said. “Our state never said a single word about home rule or Middlefield or Dryden — not until now. They should have been out there protecting the state’s rights [versus local zoning laws], and they didn’t.

“We have this great economic opportunity to move forward. We can see prosperity from our doorsteps as we look toward Pennsylvania, and yet it’s denied here in New York.”

Conversely, environmental groups were thrilled with the report. “This report appears to solidly back up the governor’s decision to ban fracking in New York,” Kate Sinding, an official with the Natural Resources Defense Council, said Wednesday. “New Yorkers have valid concerns about the threats fracking would pose to the air we breathe, the water we drink and the communities we live in.

“In the coming days, we will be digging through this lengthy analysis with a fine tooth comb. The governor has rightfully let science and the will of the people be his guide, despite pressure from a powerful industry. He should continue to proudly stand his ground.”