A report by the Manhattan Institute for Policy Research says personal income for the residents of 28 counties in New York that overlay the Marcellus Shale could grow by 15% or more over the next four years, if the state lifts a moratorium on high-volume hydraulic fracturing (HVHF). 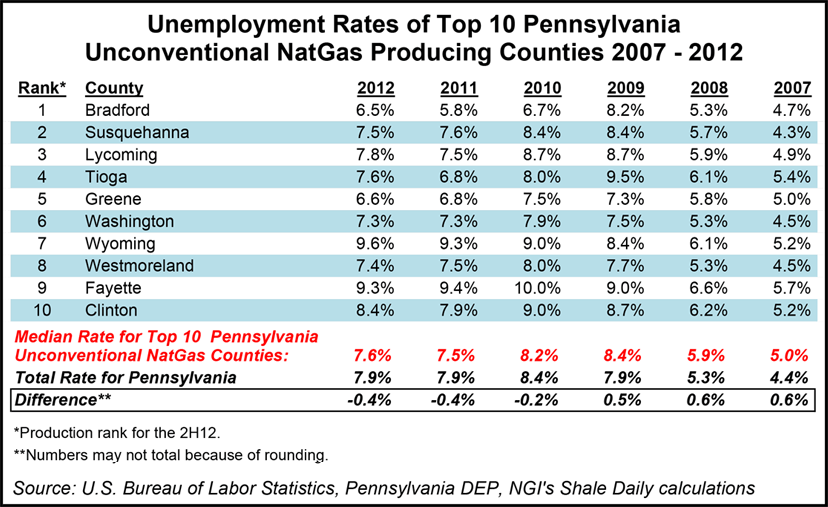 In a 20-page report, author Diana Furchtgott-Roth studied county data from neighboring Pennsylvania, including the Department of Environmental Protection (DEP), the Bureau of Labor Statistics, and the Bureau of Economic Analysis. She found a correlation between the presence and scale of shale development and various economic indicators.

“We calculate that a New York county that permits the drilling of a mere 20 wells could, in a four-year period, see per capita income rise 3% more than it would have if no wells had been drilled,” Furchtgott-Roth said. “If all New York counties above the Marcellus Shale were to pursue this course, our estimate is that they would collectively have $4.2 billion more in income just in the last year of that four-year period.

“On the other hand, drilling 400 wells in a county — which some Pennsylvania counties have done in a similar time frame — could raise incomes by over 6%, with commensurate increases in statewide gains. Tax revenues would increase with incomes.”

Several metrics were then studied at the county level on an annual basis from 2007 to 2011, including the number of jobs in a county, population, per capita income and unemployment.

“The most striking value is the growth of employment in the heavy-drilling group,” Furchtgott-Roth said. “These [six] counties added jobs at an average rate of 7.67%. None of the six counties with more than 200 unconventional wells failed to add jobs in 2007 to 11, despite the economic turmoil that gripped the rest of the state, and the nation, during this period.”

Furchtgott-Roth added that only Butler and Montour counties had higher rates of job creation than the top six in unconventional wells, although the latter has no wells.

Eight of the top 10 unconventional natural gas producing counties in Pennsylvania saw their unemployment rates drop between 2009 and 2012, according to data from the U.S. Bureau of Labor Statistics. The median unemployment rate for those 10 counties, which had been at least 0.5% higher than the total rate for the state from 2007-2009, fell to 0.2% below the state rate in 2010 and was 0.4% below the state rate in 2011 and 2012.

“At 400 wells per county, New York would gain another $8.3 billion in revenue by lifting the moratorium,” Furchtgott-Roth said. “These personal income gains would increase tax revenues and do not take into account potential residual activity and benefits for nearby counties that do not sit on the Marcellus Shale.

“Of course, each county will choose its own quantity of wells. But even at levels of development far below the maximum, our analysis estimates that billions of dollars could accrue to local economies if [HVHF] is permitted in New York State.”