New York has for now blocked even more Appalachian shale gas from entering the state after denying a key permit for the Northeast Supply Enhancement Project. 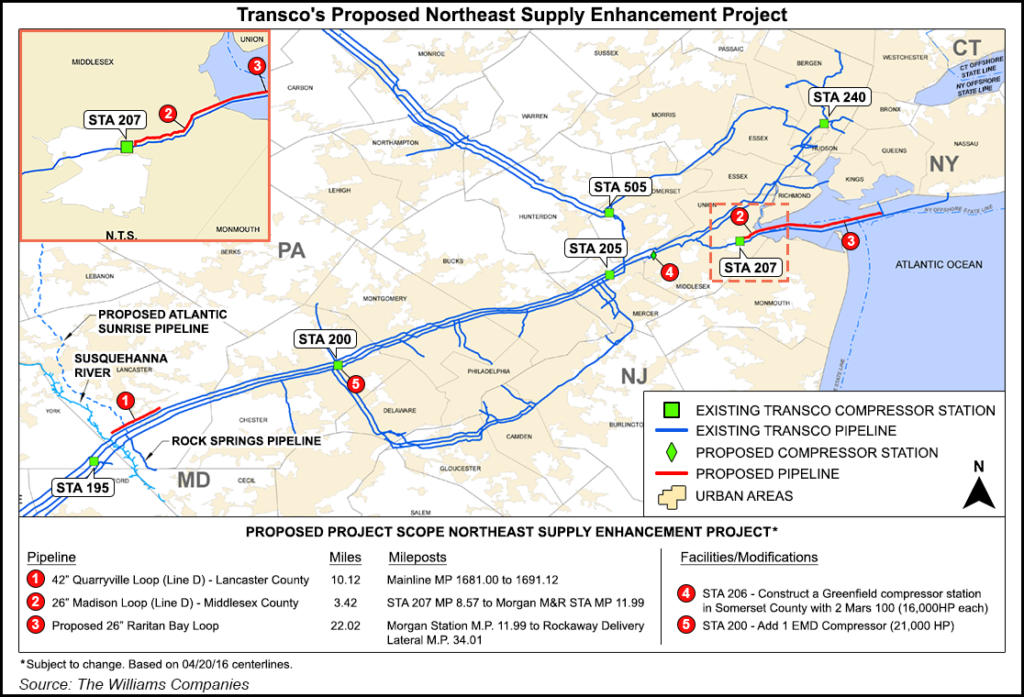 Regulators late Wednesday made another 11th hour decision as they have before on similar projects with little time to spare ahead of the statutory deadline, denying Northeast Supply’s water quality certification (WQC). Without it, construction can’t proceed. Along with similar projects that have been rejected in recent years by the state, the latest decision means more than 1.5 Bcf/d of Appalachian gas is trapped from reaching more markets in the Northeast.

Specifically, the New York Department of Environmental Conservation (DEC) said the project, part of which would cross the Raritan and New York bays underwater, would result in “significant water quality impacts” from the re-suspension of sediments and other contaminants, including mercury and copper. The pipeline would also “cause impacts to habitats” because of disturbances to shellfish beds and other resources.

The agency denied Transco’s application “without prejudice” in what parent company Williams said amounts to a “minor technical issue with our application.” Williams spokesman Christopher Stockton said “our team will be evaluating the issue and resubmitting the application quickly.” He said “we are confident that we can be responsive to this technical concern, meet our customer’s in-service date and avoid a moratorium that would have a devastating impact on the regional economy and environment,” referring to gas supply shortages announced by utilities in New York City and suburbs to the north.

The “technical issue” referenced by Williams, Stockton said, mainly relates to the agency’s concerns about the effects of dredging and the mitigation of impacts on clam beds.

It’s unclear how long the outstanding issues may take to resolve. Transco first filed for a WQC in 2017, but it was forced to refile last year after the DEC deemed its first application incomplete pending FERC’s environmental review. The Federal Energy Regulatory Commission issued a favorable final environmental impact statement earlier this year, clearing the project to advance, and it approved the project this month.

While DEC’s rejection letter on Wednesday left the door open for Transco to reapply, the agency has not “provided any indication that it would take less than a year to act on a revised application,” ClearView Energy Partners LLC said Thursday in a note to clients. Under current law, if a new application is filed the agency has up to a year to make a decision.

When asked if Williams would submit a new application or simply amend its latest, Stockton said “we will be filing a new WQC application that will incorporate by reference information already on file” with DEC. The agency suggested in comments to NGI’s Shale Daily on Thursday that the leading option to resolve the issues is a new application, as it’s obligated to follow the statutory process, which would in fact provide for another year to review new materials.

“DEC subjects all applications for environmental permits to an extensive and transparent review process that encourages public input at every step,” the agency said.

As New York continues to favor stronger climate goals it has declined to authorize a series of natural gas pipeline projects over the last three years, declining WQCs for the Northern Access expansion project, Constitution Pipeline and an eight-mile lateral to feed a gas-fired power plant in the Upstate region. The agency has employed various tactics involving review timelines that have impeded the projects, creating broader questions for the courts and FERC to wrestle with.

For example, Millennium Pipeline Co. LLC’s Valley Lateral was eventually built after it earned a favorable court decision, but both Northern Access and Constitution — another project backed by Williams — continue to battle the state to get their projects off the ground.

President Trump recently signed an executive order aimed at expediting approval of natural gas pipelines in a move aimed at curbing states’ ability to slow down projects. It directs the Environmental Protection Agency to update Clean Water Act guidance for states by June 6.

However, ClearView analysts said it isn’t yet clear whether the revised guidance would have an impact on DEC’s review of Northeast Supply. The firm also noted that Williams could appeal the decision to DEC or seek judicial review at the state or federal level, which are likely to be time-consuming options.

In the meantime, utilities in the state, particularly those serving New York City and the surrounding region, have repeatedly warned of gas shortages. Consolidated Edison Co. (Con Ed) earlier this year implemented a moratorium on new gas hook-ups to the north of the city in Westchester County. Con Ed and National Grid have also warned of similar moratoriums in the city if Northeast Supply is not built. ConEd has already inked deals to expand the Iroquois and Tennessee interstate gas systems to get more volumes into downstate. Those agreements, however, wouldn’t provide more supplies until 2023.

Northeast Supply is fully subscribed by National Grid, which has separate agreements with undisclosed producers to supply the gas. Spokesperson Wendy Ladd said the company remains “cautiously optimistic” that the project will move ahead on schedule and be in service for Brooklyn, Queens and Long Island customers by the winter of 2020-21.

“Until we have greater certainty around the project’s application approval timeline, we will continue to advise all new commercial and residential applicants that our ability to provide firm gas service is contingent on the timely construction” of the project, she added.

Con Ed, which shares infrastructure with National Grid that serves all of New York City’s boroughs, warned of the potential fallout from the DEC’s decision. “Without the addition of new gas capacity to meet rising demand and support economic growth, there will be increased competition for existing natural gas supplies between Con Ed and National Grid’s customers in New York City,” it said. “Those constraints will impact the price and availability of natural gas.”

Northeast Supply is designed to create 400 MMcf/d of incremental firm capacity to meet demand for gas in New York City. The expansion would include 10 miles of pipe in Pennsylvania, three miles in New Jersey and 23 miles of pipe that would stretch into offshore New Jersey and New York in addition to a compressor station in Franklin Township, NJ, and more horsepower at an existing station in Pennsylvania. The system would link gas from Transco’s Compressor Station 195 in York County, PA, to its offshore Rockaway Transfer Point, an existing interconnection between the underwater Lower New York Bay Lateral and the Rockaway Delivery Lateral in New York waters.

Pennsylvania issued a WQC for the project in March 2018. Of particular concern for the project’s opponents is the 23-mile segment of pipeline that would cross Raritan Bay from Old Bridge, NJ, to Rockaway Point in Queens. There are already other pipelines installed and operating in those waters. Transco installed the first line in the Raritan Bay in 1951.

New York’s reluctance to authorize similar projects that would serve the Northeast has rankled the industry, particularly in Appalachia.

“Critical energy infrastructure projects like this pipeline help ensure that abundant American natural gas can reach families, small businesses, hospitals and manufacturers, as well as power generators whose increased use of the fuel is delivering historic clean-air benefits,” said Marcellus Shale Coalition President David Spigelmyer. “By continuing to block development of these projects, the Cuomo administration’s energy blockade is instead forcing consumers in New York to pay more for energy and have less access to affordable natural gas being produced nearby.”

New Jersey, which under Democratic Gov. Phil Murphy has started to challenge pipeline projects, would also need to issue authorizations for Northeast Supply. The New Jersey Sierra Club on Thursday called on Murphy’s administration to follow New York’s lead and deny a WQC for the project in the state.

Environmentalists had also been pressuring public officials ahead of Wednesday’s deadline. The fight surrounding Northeast Supply has been viewed by the environmental community as a test of Democratic Gov. Andrew Cuomo’s commitment to the environment and renewable energy, culminating in a series of protests and sit-ins over the past few weeks. Dozens of federal, state and local officials have also opposed the project.

Environmental groups on Thursday hosted a rally to address the decision at New York City Hall, expressing concerns over the “lack of an outright denial” from DEC. They have pledged to double-down on efforts to halt the project if it’s eventually approved.

“New Yorkers are winning the fight” against the Williams pipeline, “and we’ll make sure this dangerous and unnecessary pipeline is never built,” said the Stop the Williams Pipeline Coalition. The group said utilities in the city are “manufacturing false demand,” and the coalition again called for a ban on all new fossil fuel infrastructure projects across the state.