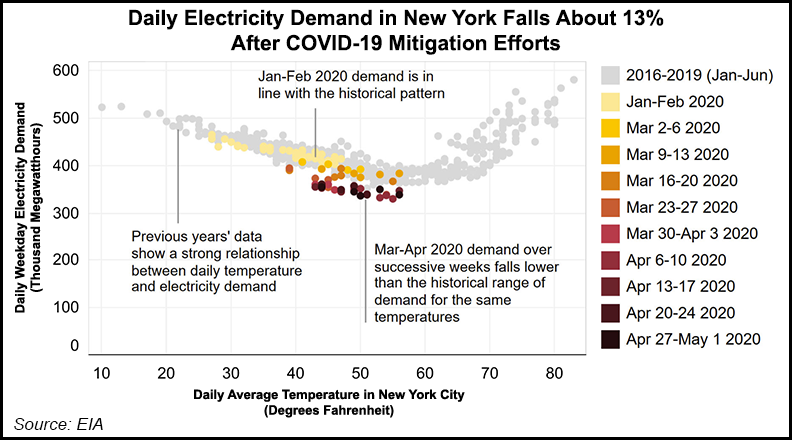 Using data from the New York Independent System Operator (NYISO), researchers compared daily power demand for each weekday in 2020 through May 1 to the average demand of all weekdays with the same daily average temperature from January through June in 2016-2019.

By comparing current demand to temperature-comparable days rather than just to similar calendar days from previous years, researchers can better isolate the effects of unexpected events such as coronavirus mitigation efforts, EIA said.

In NYISO Zone J, which includes New York City, the drop in demand has been slightly more pronounced than in the rest of the state, researchers said, noting that from late March through April, daily weekday power demand averaged about 16% lower than temperature-comparable historical demand, using 2019 data.

NYISO said last week that New York City hourly demand from April 20-24 ranged from 5% to about 20% below typical levels, and that peaks across the statewide New York Control Area (NYCA) averaged 7-8% below expectations for the week.

The grid operator said its forecast team “has observed that the reduction in electric demand from commercial customers is a leading driver of reduced electricity consumption.” However, the team also has observed an increase in residential energy use, “especially during the midday.”

EIA researchers said that, “Electricity demand changes in New York state and in New York City, in particular, have been more pronounced than in other parts of the country, which may partly be caused by regional differences in how much electricity each end-use sector consumes and the varying effects of Covid-19 mitigation efforts on the sectors.”

Moody’s Investors Service recently forecast a net decline in year/year peak load demand in the United States for 2020, but said that the impacts will vary widely by region.

As of May 5, all nonessential businesses in New York state were under orders to stay closed through May 15.

EIA said that it would provide a similar update on Thursday (May 7) on the impacts of Covid-19 mitigation efforts on power demand in the central United States and Florida.