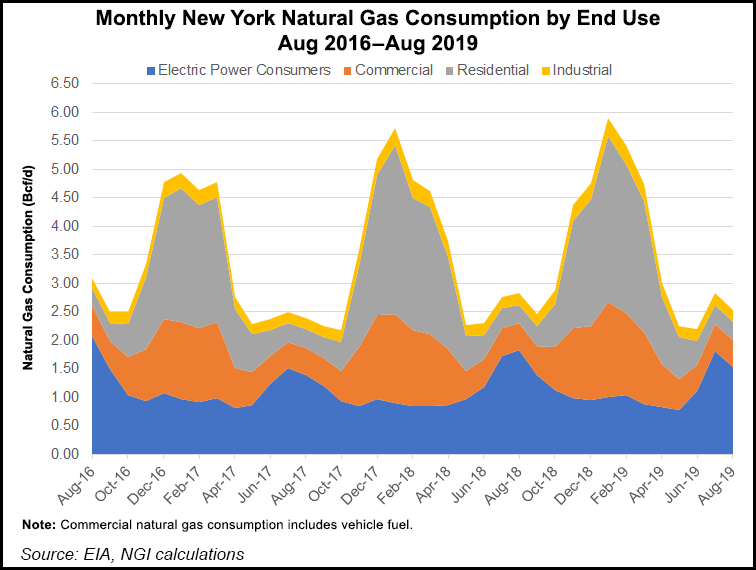 A strongly worded letter Cuomo sent to National Grid last week in his ongoing battle with the utility regarding a moratorium “signals a heightened willingness by the governor’s office to intervene in utility regulation,” the credit analyst firm said.

The intervention creates higher business risk for all utilities in the state, but particularly for Consolidated Edison Co. and New York State Electric & Gas Corp., which have similar moratoriums in place because of a natural gas supply shortage, which Cuomo and environmental groups have said is a fabrication.

The moratorium stirred the ire of the business community and politicians, which prompted a New York State Public Service Commission order requiring National Grid to connect service for 1,100 customers in Brooklyn, Queens and Long Island, which the utility is working to accomplish.

Cuomo accused the utility of failing to plan for supply needs and depending too heavily on Transcontinental Gas Pipe Line Co. LLC’s Northeast Supply Enhancement (NESE) project, which is fully subscribed by National Grid subsidiaries. However, both New York and New Jersey have rejected key permits for the pipeline, preventing it from advancing.

Over the summer, New York passed one of the most aggressive climate protection bills in the country, while Cuomo has indicated he favors alternative energy over natural gas. His administration has stymied other pipeline projects and banned hydraulic fracturing.

Cuomo noted in his letter that a utility is granted a certificate of public convenience and necessity only if it can provide “adequate and reliable service” and the utility’s operation is “in the public interest.”

Pettigrew countered by saying that the state is unlikely to revoke National Grid’s certificate as the move “is for circumstances where there have been multiple violations of regulations or rules, of which this isn’t applicable.” He added that there are no issues concerning safety or reliability that would warrant a termination of the utility’s franchise in the state.

National Grid has said previously it would better manage the supply shortage by expanding demand response and energy efficiency programs. Pettigrew said last week during the call with financial analysts that the company is working through a number of different “non-pipeline” solutions.

“So, for example, as we’re looking at things like energy efficiency and demand side management, we’re looking at things like compressed natural gas, vaporization, increased capacity on our” liquefied natural gas facilities, “there are a whole host of engineering solutions that we need to work through,” he said. “Ultimately, our objective is to be able to serve the customers.”

Pettigrew said he’s confident the company can satisfy the state’s demands in the timeline Cuomo has put forward. However, he noted that the costs associated with the supply alternatives would be passed through to consumers.