As part of a broader shift away from natural gas in New York, a pair of local utilities committed to achieving net-zero growth in gas sales throughout their service territories during a three-year period beginning Dec. 1. 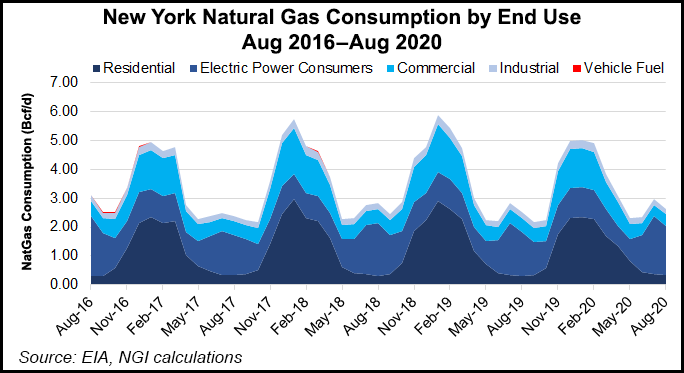 New York State Electric & Gas Corp. (NYSEG) and sister company Rochester Gas & Electric (RG&E) made the commitment under a rate plan approved Thursday by the New York State Public Service Commission. Under the plan, which is in compliance with the Climate Leadership and Community Protection Act (CLCPA), the utilities also pledge to discontinue their promotion of natural gas services, incentivize the expanded use of heat pumps and pursue non-pipe alternatives.

In addition, NYSEG and RG&E agree to conduct several studies, including those related to geothermal district energy systems, natural gas system resiliency and the impacts of clean energy policies on the future of gas businesses.

“In sum, the gas-related provisions further New York’s ambitious climate-related policy goals and can serve as a model for future rate cases,” the Commission said.

New York City Mayor Bill de Blasio wants to ban all fossil fuels use, including gas, in the city’s “large building systems” by 2040. Government buildings would be the first to undergo the proposed overhaul.

The New York utilities, in their initial proposal, said the major drivers for the gas delivery rate increase include the additional return requirement associated with rate base growth, along with increases in depreciation expense and operations expense, as well as labor and benefits costs. The Commission said its decision accounted for issues and concerns raised in public comments and also supports the CLCPA, “which aims to build a cleaner, more resilient and affordable energy system.”

The new gas rates were part of a larger rate plan that the New York utilities sought to boost electric revenues. However, the changes made by the Commission lowered the revenues to be collected from NYSEG electric customers during the rate plan by more than $130 million. Revenues to be collected from RG&E electric customers were reduced by almost $25 million.

“Since the beginning of the case on May 20, 2019, department staff has worked tirelessly to minimize cost increases by advocating progressive outcomes regarding affordability, energy efficiency and the environment,” the Commission said.

They also would be tasked with mitigating the potential economic impact of the recommended rate increases on ratepayers, “including a nation-leading affordability policy that substantially lowers bills for most low-income customers.”