The New York Independent System Operator (NYISO) has outlined a series of market design and system planning enhancements designed to integrate renewable resources into its system. 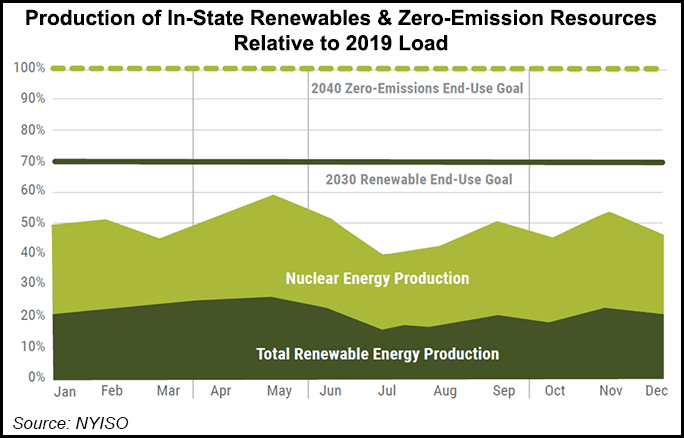 In the electric grid operator’s annual publication, Power Trends 2020: Vision for a Greener Grid, the NYISO outlined the complexity of its grid and how it is affected by various components such as economic forces, public policies and technology.

One specific policy highlights is New York’s Climate Leadership and Community Protection Act (CLCPA), amended last July in state Senate Bill S6599. The CLCPA requires that the state reduces greenhouse gas (GHG) emissions by 100% from 1990 levels by 2050, with at least a 40% decrease by 2030. Further, the CLCPA entails that 70% of electricity should come from renewable sources by 2030, and calls for a 100% reduction of GHG emissions from the electricity sector by 2040.

As of last summer, NYISO’s electric mix operates with about 59% zero emissions, at 79,622 GWh, dominated by upstate nuclear and hydropower plants. Natural gas-fired power generation contributes 7,594 GWh, or 5%, to energy composition, while dual fuel (gas/oil) making up 34% at 47,526 GWh.

Moving forward, the NYISO has recommended that to integrate renewable resources into the system, the grid operator will examine several market design and system planning enhancements, including:

● Integrating energy storage resources under market rules developed in 2018 and approved by the Federal Energy Regulatory Commission, and expected to be implemented in 2020;

● Integrating distributed energy resources-related rules into wholesale markets, which were approved by FERC earlier this year and are scheduled to go into effect next year; and

● Evaluating how the capacity market rules could be modified in a way that continues to preserve competitive price signals and economic efficiency, all the while maintaining grid reliability as well as support CLCPA requirements.

“2020 has proven to be a year unlike any other in recent memory,” said NYISO President Rich Dewey. “Through these challenges, the NYISO remains committed to engaging stakeholders, market participants, policymakers and the public to support an electric system that is reliable, efficient, affordable and clean.”

New York City Mayor Bill de Blasio announced in February that the city must phase out fossil fuels, including natural gas, in its “large building systems” by 2040. The mayor also announced plans to sign an executive order to halt any new fossil fuel infrastructure, including pipelines, power plant expansions and import terminals.

To maintain grid reliability for the 19.8 million New Yorkers that NYISO serves, this year’s Power Trend described not only how it plans to address the integration of renewable resources into the grid, but also how the operator can continue to benefit from its wholesale markets and system planning.

While the grid transitions to include more renewable resources, NYISO said it is examining several important studies to inform future market, planning and operational enhancements. One is the Congestion Assessment and Resource Integration Study, which examines the CLCPA’s 70% renewable energy production requirement by 2030.

A Reliability Needs Assessment also is in the works to assess compliance plans for the Department of Environment and Conservation’s peaker rule, which entails more stringent emission limits from combustion turbines, predominantly located in southeast New York.

Furthermore, NYISO is conducting a multi-phase Climate Change Impact & Resilience Study to inform future market, planning and operational enhancements that might be necessary to meet system needs and conditions as demands and conditions faced by the grid change over time. The electric grid operator also is working on a comprehensive program to address cyber, as well as physical security risks for the future.

As for the current state of the system, the NYISO’s market average annual wholesale energy prices reached a record low last year at $32.59/MWh. Meanwhile, the CO2 emission rate from the power sector showed a 55% decrease since 1990. Power Trends additionally outlines the challenges NYISO has faced during the pandemic crisis.