Carbon dioxide (CO2) emissions declined by about 14% when 35% of hydrogen by volume was blended with natural gas to generate electricity in a demonstration project commissioned by the New York Power Authority (NYPA), and could fall further with more hydrogen added to the mix. However, more work needs to be done to study the impact of blending on other greenhouse gasses. 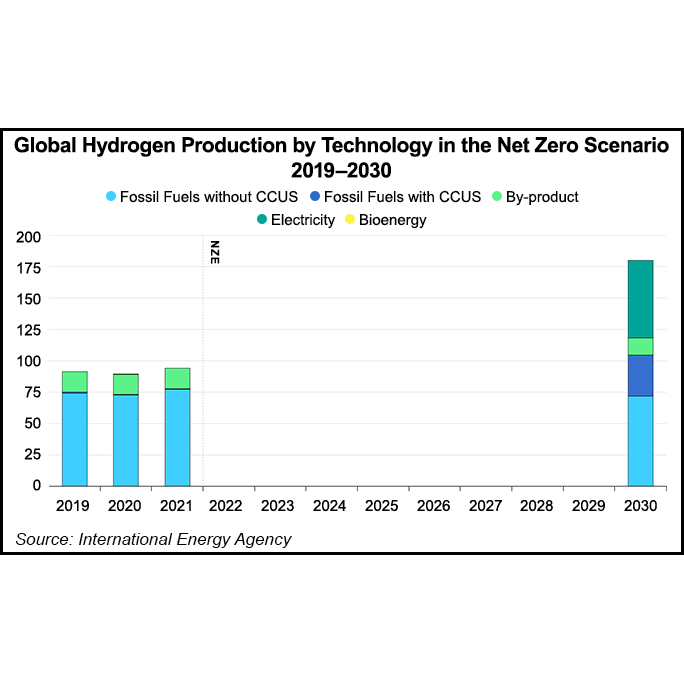 NYPA carried out the hydrogen blending on an LM6000 gas turbine at its Brentwood Power Station on Long Island in partnership with the Electric Power Research Institute Inc.’s Low-Carbon Resources Initiative and General Electric (GE). The GE turbine was operated on green hydrogen blends ranging from 5% to 44% by volume. Based on the early results, CO2 emissions could decline to zero at a 100% hydrogen cofiring rate.

“Decarbonizing the power sector will require a collaborative, multi-pronged approach, including the use of new technologies and additional renewable power resources,” he said.

“This result could prove consequential for power plant operators to begin testing and using hydrogen fuels – aiming to lower a facilities’ carbon output – with minimal or no required modifications to plant systems,” according to NYPA.

The project partners chose the Brentwood facility because of its location and layout. These, combined with Brentwood’s relatively low capacity factor as a peaking unit, facilitated the temporary modifications required for the demonstration project, they said.

The demonstration project, conducted from the fall of 2021 to this spring, had no impact on the plant, according to NYPA. The blending was not performed during unit startup and shutdown operations.

What About Other Emissions?

Despite the positive results on CO2 emissions, the study uncovered challenges as well.

At steady water injection rates based on burning natural gas, gas turbine outlet NOx levels increased by up to 24% as the hydrogen fuel fraction increased. The LM6000 gas turbine is equipped with single annular combustion technology, which requires water injection for NOx control. The plant also is equipped with post-combustion catalyst systems for NOx and CO control.

By increasing water injection rates less than 20% by volume, gas turbine outlet NOx levels were maintained at a constant level as hydrogen fuel increased to greater than 35% by volume, the study results found. At the same turbine load, maintaining a constant turbine outlet NOx level while increasing the hydrogen fuel percentage required almost a linear increase in the water injection flow rate.

“It is important to note that this NOx increase observation is specific to LM6000 SAC technology and may not apply to dry-low emissions combustors,” NYPA said.

Researchers noted that – in practice – if increasing water injection rates in order to maintain steady NOx levels is not an option, and turbine outlet NOx levels increase, owners may need to make modifications to maintain stack permit compliance. This potentially could increase capital and operations and maintenance (O&M) costs.

“Depending on stack permit requirements, hydrogen cofiring could allow LM6000 units to operate across a wider load range without CO oxidation catalysts or with reduced volumes of catalyst, potentially lowering capital and O&M costs,” NYPA said.

NYPA told NGI that no other hydrogen blending studies were planned for other power plants in the state. Instead, the agency is “prioritizing the exploration of battery storage at its peaker plants. “We look forward to collaborating closely with the industry on next steps,” it said.

New York has mandated a zero-emission electricity sector by 2040. Through its Climate Leadership and Community Protection Act (aka Climate Act), 70% of New York’s electricity is to come from renewable sources by 2030. An emissions-free power sector is targeted by 2040, and net zero economy-wide greenhouse gas emissions by 2050.

New York Gov. Kathy Hochul, whose term began in January, has worked to accelerate the energy transition. She has advocated a statewide ban on new gas hookups and wants to speed up displacing fossil peaker plants using renewable sources and battery storage.

Hochul said the state would invest up to $500 million to develop New York’s offshore wind port infrastructure and supply chain. The state’s Climate Act requires 9 GW of offshore wind capacity by 2035. A goal of two million electrified or electrification-ready homes by 2030 also is on the table.