A panel of outside experts that will help conduct a health impact analysis of high-volume hydraulic fracturing (HVHF) in New York are not yet under contract, Department of Environmental Conservation (DEC) Commissioner Joseph Martens said Friday. 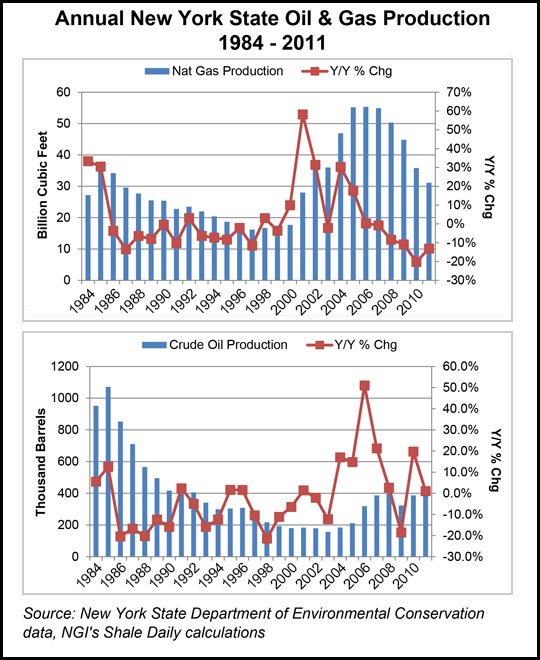 Meanwhile, in a separate interview last week, Sen. Thomas Libous (R-Binghamton) — a key supporter of Marcellus and Utica shale development in the Empire State — repeated his message that the administration of Gov. Andrew Cuomo should try to arrive at a determination over HVHF before the end of the year.

In a video interview posted online by the Gannett news service, Martens told reporters that Department of Health (DOH) Commissioner Nirav Shah would consult with undisclosed medical experts in a health impact analysis of HVHF, a request Martens made of Shah last month as it looks to wrap up its supplemental generic environmental impact statement (SGEIS) on the practice (see Shale Daily, Sept. 24).

“We still don’t have contracts with them yet, so it’s not 100% certain at this point what the exact scope [of the analysis] is going to be,” Martens said. “But they’re going to review the health portions of the SGEIS and how we’ve addressed health impacts in the mitigation measures. The whole emphasis…is [on] containment; it’s to prevent health impacts. We described what we think is necessary to mitigate and prevent exposure to things like air emissions and chemical contaminants. We think we’ve looked very thoroughly at the potential health avenues for exposure and proposed measures to mitigate that exposure and minimize it so there aren’t health impacts. We’re asking Dr. Shah and his experts to say [whether] we’ve adequately addressed the potential avenues for exposure.”

Martens said some additional mitigation measures have been suggested and included in the final draft of the SGEIS, which is not yet available to the public but is available to Shah and his panel. “We’ve done a lot more work since the last draft that the public has seen,” he said. “Dr. Shah will have the benefit of seeing the additional work and measures that we’ve proposed in our final draft.”

Last week Libous told Gannett’s Albany bureau that he supported Martens’ decision to include Shah in the process but said that process now needed to move forward.

“The [DOH] has done a number of studies [on HVHF],” Libous said, adding that the DOH had made previous presentations to state officials which “seemed to tell us that they were prepared to monitor the air quality and different things. It’s time now to make a final determination as to whether or not permitting should take place. It’s time to let those landowners who have been waiting — those individuals who have been extremely patient for well over four years — to know whether or not this is something that it going to commence.

“We know that the State of New York and the DEC and the [DOH] are going to be strict. I want them to be strict. But at the same time hundreds of millions of dollars and thousands of jobs [are at stake]. There comes a point when you can only study science so much. It’s either something that can be regulated and controlled in a safe manner or it’s something that can’t.”

Martens appeared to disagree with a reporter’s inference of Libous’ previous comments, that studies over the potential impacts of HVHF were essentially done. “It’s not done because we’ve asked Dr. Shah to review it,” Martens said. “He may come back and say ‘you need to do additional work.’ We don’t know what Dr. Shah is going to say. We aren’t going to be done until we hear back from [him].”

The DEC is facing a Nov. 29 deadline for the revised hydraulic fracturing (hydrofracking) drilling rules. If it misses the deadline, the rulemaking process would need to be reopened to at least one public hearing, a process that could take at least 45 days (see Shale Daily, Oct. 2).

Asked if his agency would meet the deadline, Martens said “[that is] to be determined. Dr. Shah has contacted several well-known experts in the field who are familiar with the hydrofracking process and are familiar with health assessments. We need to get them under contracts. The timing of everything depends on how quickly that process will go.

“It’s possible [we’ll make the deadline]. We’re working very hard to push this process forward. It all depends on whether we finalize things sooner rather than later. If we finalize them later, then we may have to go back for [additional] public comment. It really depends.”

The DEC held its last public hearing on HVHF on Nov. 30, 2011 and the public review process was said to be completed in January (see Shale Daily, Jan. 12). Under state law, the DEC has one year after the last hearing to finalize rules, although a 90-day extension is permitted. DEC officials said Shah’s review has an “undetermined” deadline.