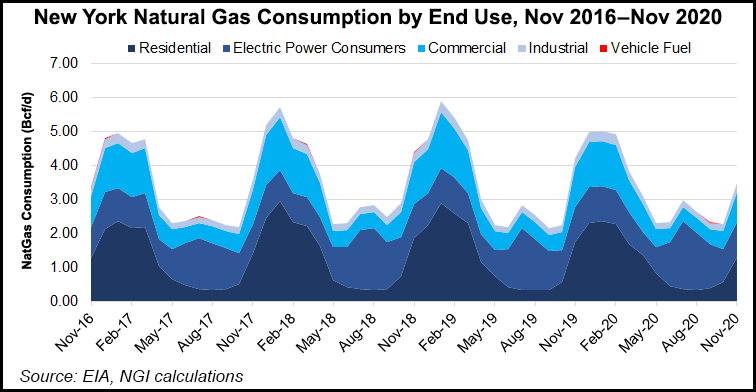 By banning fossil fuel hookups, New York will be “literally ensuring that our only choice is renewable energy,” de Blasio said in his 2021 state of the city address, according to a transcript.

The pledge follows a commitment by the city’s largest pension funds, which hold an estimated $4 billion in securities, to pull their money out of fossil fuel investments within five years.

“We started by taking the billions of dollars in New York City pension fund investments and taking them away from fossil fuel companies that were poisoning the earth, putting that money into renewable energy development,” de Blasio said Thursday. “And now, we resolve to deepen this effort by making a commitment to a $50 billion investment of our pension resources in renewable energy over the next 15 years.

“We will take all of our pension fund dollars away from any element of the fossil fuel supply chain and make sure those dollars are helping us create a greener future.”

He added, “We need to turn to renewables like never before and connect New York City to clean Canadian hydropower and invest in the transmission lines that make that possible.

“With this new asset, New York City’s government will run on 100 percent renewable energy in the next four years.”

De Blasio said the city must also move “away from cars, leaving the era of the automobile behind.

“We’re going to make open streets a permanent part of New York City, giving back the streets to the people, to pedestrians and bicyclists, using them to deepen our open restaurants program and create a beautiful community oasis.”

These changes, he said, will “allow us to move out of the era of fossil fuels and the era of the automobile, and into a green future as part of our commitment to the New York City Green New Deal.”

The city will establish intermediate goals for the fossil fuel ban between now and 2030, and ensure the ban does not negatively impact renters and low-income residents, the mayor’s office said.

De Blasio also is pledging to increase pension fund investments in climate solutions to $50 billion by 2035 and move the funds’ portfolios to net zero greenhouse gas emissions by 2040.

“To ensure this progress continues in the future, the funds should begin reporting on the carbon footprint of pension portfolios and progress towards decarbonization,” the mayor’s office said.