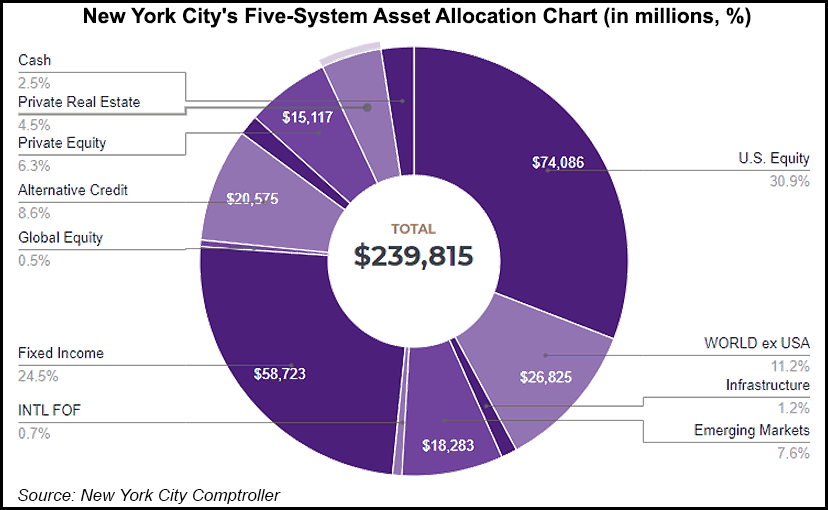 Mayor Bill de Blasio, Comptroller Scott M. Stringer and trustees of two of the city’s pension funds said the plan is to cut off money for fossil fuel-related investments within five years.

In a first-in-the-nation step, de Blasio, Stringer and other trustees of the city’s pension funds in early 2018 launched a sweeping plan to drop fossil fuel investments from the city’s five pension plans.

The funds have securities in more than 190 fossil fuel-related companies.

Fossil fuels “are a bad investment,” de Blasio said. Stringer called climate change ‘the fight of our lives, and we must face it head on with everything we’ve got – for our planet, for our children, and for our retirees.”

The city’s commitment was followed by other large funds taking similar action, including the City of London, the Norwegian Sovereign Fund and the New York State Common Retirement Fund.

According to city officials, securities to be divested “were identified based on demonstrated risk from fossil fuel reserves and business activity, and the trustees will continue to evaluate risk in their portfolios to determine additional actions as warranted.”

The names of companies and the final scope of the divestment are to be released once the sale “is completed in a prudent manner to achieve best execution.”

In addition to divesting fossil fuel investments, de Blasio and Stringer two years ago announced a goal to double the pension funds’ investments in climate solutions to 2%, or around $4 billion within three years.

The pension funds are planning to invest in renewable energy, climate infrastructure, “green” real estate and other investments to help achieve the goals of the United Nations climate accord, otherwise known as the Paris Agreement.

“Divesting from fossil fuels and investing in climate solutions will accelerate our economic recovery by creating good paying jobs in clean energy, resilient infrastructure and environmental justice,” said the city’s Daniel Zarrilli, who is chief Climate Policy Advisor. “This is how we secure a livable climate for the next generation and end the age of fossil fuels for good.”