The New York legislature has passed one of the most aggressive climate protection bills in the nation that’s expected to be signed by Democratic Gov. Andrew Cuomo, putting the state on track to eliminate greenhouse gas emissions (GHG). 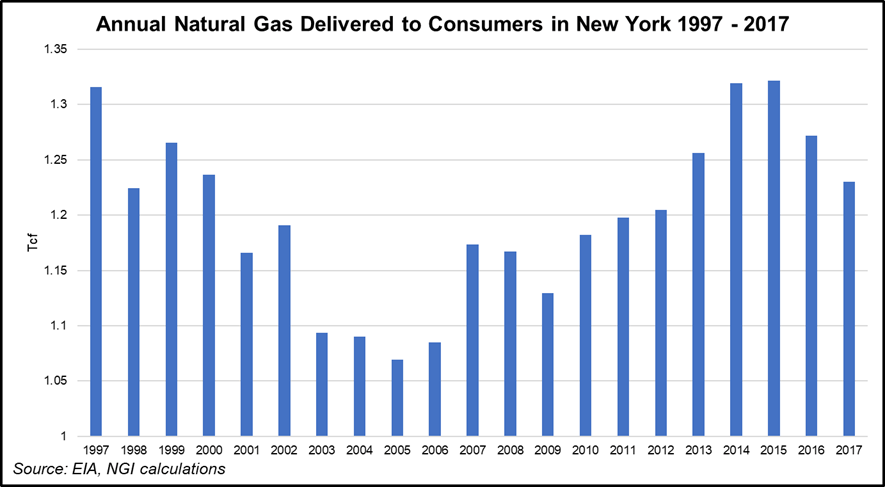 The Climate Leadership and Community Protection Act (CCPA) solidifies the state’s stance against fossil fuels, particularly natural gas as it’s already blocked several infrastructure projects in recent years. The legislation also codifies some of the ambitions Cuomo laid out earlier this year in his plans for a “Green New Deal” for New York.

Under the legislation, the state would target an 85% cut in GHG emissions below 1990 levels by 2050 and offset another 15% with the ultimate goal of creating a net-zero economy. The bill also requires the state to generate 70% of its electricity from renewable sources such as wind and solar by 2030 and obtain 100% of its electricity from renewables by 2040.

New York is the sixth state to adopt a 100% renewable portfolio standard (RPS), joining California, Hawaii, New Mexico, Nevada and Washington, as efforts are underway in states controlled by Democrats across the country to curb the impacts of global warming. While Washington Gov. Jay Inslee signed a similar law into effect last month, New York’s regulations would be even more aggressive than rules established by California.

Last year, California enacted a bill increasing its RPS mandate to 60% by 2030, and it established a 100% alternative energy mandate that requires utilities to procure all their electricity from clean sources by 2045. The state has also committed to reduce its GHG emissions by 80% below 1990 levels by 2050, with an ambitious interim target of 40% below 1990 levels by 2030.

To reach such targets in New York, CCPA would spur the procurement of at least 9 GW of offshore wind power by 2035, 6 GW of solar power by 2025 and 3 GW of energy storage by 2030, among other things. Fossil fuels currently account for 66% of the state’s electric generating capacity and 39% of its production, according to the New York Independent System Operator.