A four-day winning streak spurred by chillier forecasts for the second half of January resulted in sharp increases in natural gas forward prices. Gains were particularly strong on the East Coast, nearing 60.0 cents at several pricing hubs during the shortened Dec. 30-Jan. 6 trading period, according to NGI’s Forward Look. 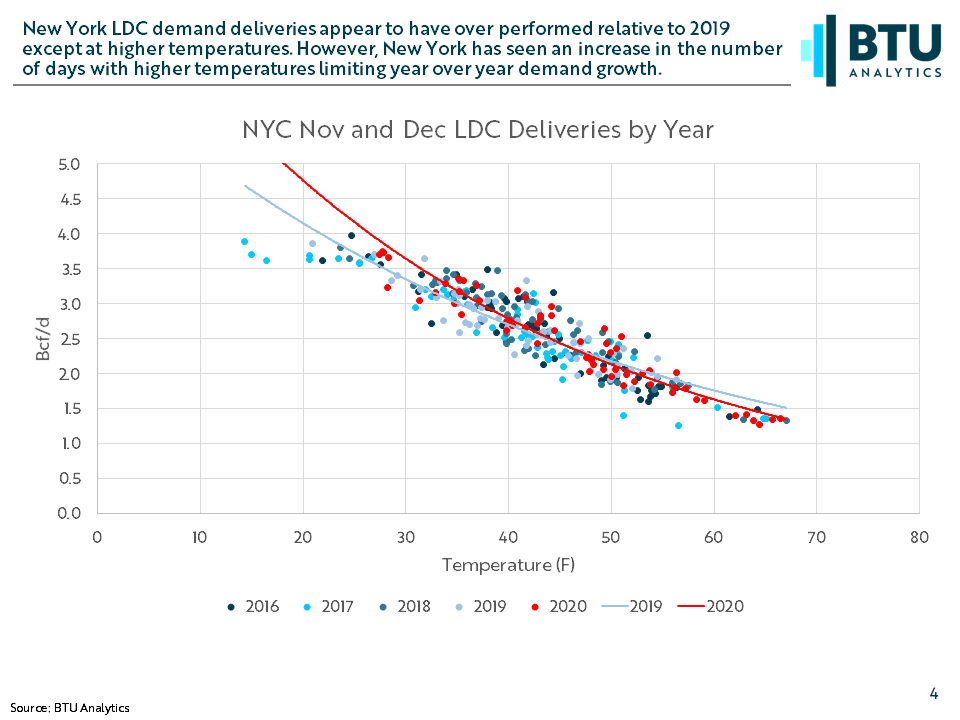 Nymex futures mounted solid increases across the curve as the colder January outlook was seen as the final piece of an otherwise constructive backdrop for prices. The February Nymex gas futures contract jumped about 29.0 cents to $2.716 during the period, while the balance of winter (February-March) climbed 28.0 cents to $2.700. Summer prices were up 23.0 cents to $2.790, and winter 2021-2022 prices moved up 10.0 cents to 2.660.

EBW Analytics Group said it was important to note that the steep gains occurred even though the first three weeks of January are forecast to come in 66 gas-heating degree days below normal. “This bearish outlook is simply less extremely bearish than early last week.”

Although only brief spates of sharply colder weather were on tap for the second week of January, a colder transition remains possible for the third week of the new year, particularly with signs of potential cold emerging in the particularly significant Upper Midwest region. EBW said steepening cold was taking aim at the “locus” of natural gas production centers in the South Central region, and could lead to wellhead freeze-offs in parts of the Permian Basin and Eagle Ford, Barnett and Haynesville shale plays.

“Any losses in production may further add to upward price pressure from elevated space heating demand locally,” EBW said. “The possibility of an ultra-bullish scenario carrying the February contract as high as $3.25-$3.50/MMBtu should not be entirely ruled out.”

Meanwhile, it is possible that liquefied natural gas (LNG) feed gas demand may hit new all-time highs during the same period, according to EBW. The third production unit at the Corpus Christi export terminal was continuing the commissioning process, but the firm’s calculations based on feed gas demand for Train 1 and Train 2 suggested that demand could still add 0.2-0.3 Bcf/d from prior highs.

At the same time, it appeared that other export terminals were attempting to operate close to maximum capacity to take advantage of record prices internationally. LNG prices in northern Asia have hit record highs amid a cold snap and supply crunch that’s left buyers scrambling for supplies.

In Japan, where combined-cycle gas turbines entirely dependent on LNG represent a significant portion of power supply, electricity prices have skyrocketed, rising nearly 10 times than the same days in 2020, according to Tudor, Pickering, Holt & Co. (TPH). Manufacturers in the Tokyo and Kansai regions with private power supplies have been asked by the grid operator to sell into the spot market to avoid blackouts.

Power demand in Japan has increased as a result of a cold wave. In addition, there is low nuclear availability because of technical defects and revoked permits at major facilities that failed to meet new counter-terrorism standards following the Fukushima tragedy a decade ago, TPH analysts said.

LNG has been unable to step in either, as the entire region (particularly China) is facing unusually cold weather, which, combined with export project outages, have demand far exceeding supply.

“The scarcity of gas supply is causing the region to be a magnet for flexible LNG cargoes, and Japan Korea Marker prices have already pushed through $20/MMBtu for prompt delivery,” the TPH team said. “Unprecedented” demand in Asia has led to rapid European gas storage draws as cargoes are diverted to the Pacific markets. This means higher utilization of U.S. LNG in the summer to refill storage.

“The higher utilization pushes, the tighter the U.S. market, the better the prices through the second and third quarters. Dare we say it, it’s an exciting time to be in energy,” TPH said.

Of course, there is still winter to get through. On the home front, the warm weather to date has prevented the rapid depletion of storage inventories previously expected.

On Thursday, the Energy Information Administration (EIA) said U.S. inventories fell by 130 Bcf for the week ending Jan. 1 to reach 3,330 Bcf. After weeks of relative stagnation in the overhang, the triple-digit draw slashed the surplus to year-ago levels by 113 Bcf.

Bespoke said the EIA estimate was “dead-on” and in the middle of the range of market estimates, making it “about as neutral as can be versus expectations.” The 130 Bcf pull still reflected a “loose-ish” supply/demand balance, according to the firm, but with holiday impact, there is not much that should be read into this.

“We do think the balance will tighten somewhat as we move forward, but it is the weather that will be the ultimate driver of prices over the next few weeks,” Bespoke said.

Broken down by region, the Midwest led with a 50 Bcf withdrawal, and the East came in second with a 45 Bcf pull, according to EIA. The South Central region only took 20 Bcf out of storage, including 19 Bcf out of nonsalt facilities.

A participant on The Desk’s online chat Enelyst said “salts are being very patient” and that production must be higher than the market is giving it credit for. Much of the production in the Lone Star State lies on intrastate pipelines that are not regulated by the Federal Energy Regulatory Commission.

Total working gas in storage on Jan. 1 stood 138 Bcf above year-ago levels and 201 Bcf above the five-year average, according to EIA.

Looking ahead to the next storage report, a slightly weaker figure is expected, with early estimates by Enelyst participants in the 120 Bcf range. Mobius Risk Group said the two withdrawals for this week and next combined are what is needed in a single week to jar the market out of its slumber and prompt a retest of pre-winter highs.

“Although the storage surplus will easily contract by more than 100 Bcf over this two-week period, the recent rally will be reliant on forecasted cold to be confirmed, as 16-20 day forecasts move into the more prompt and higher confidence windows of time.”

With potentially more cold weather over the next two weeks in the Northeast, and with storage inventories in the region now below year-ago levels, prices were on a tear over the Dec. 30-Jan. 6 period.

As usual, New England markets posted some of the steepest gains as pipelines in the region run at full capacity throughout the winter. Algonquin Citygate February prices shot up 53.0 cents to $5.692, while the balance of winter edged up 45.0 cents to $4.880, according to Forward Look. Summer prices bounced 22.0 cents to $2,490, as did winter 2021-2022 prices, which averaged $5.730.

BTU Analytics LLC said despite the cold snap that closed out 2020, exceptionally warm weather this winter generally has placed downward pressure on prices. One exception that has bucked this trend is New York, where demand increased in 2020 compared with 2019.

“These increases are likely due to a higher population density” as well as the potential for fuel oil switching, “which is not as prevalent in other regions,” said BTU analyst Connor McLean.

However, above 50 degrees, demand decreased by around 6%, BTU data showed. Like Boston, demand underperformance at higher temperatures was accompanied by an increase in the number of warmer days, with New York experiencing 22 days above 60 degrees. This compares to an average of 11 days in the last three years.