A Salt Lake City-based firm with a new natural gas/electric truck is trying to become the first vertically integrated operator in the natural gas vehicle (NGV) sector with a stake in gas supply, fueling infrastructure and a hybrid near zero-emission NGV. 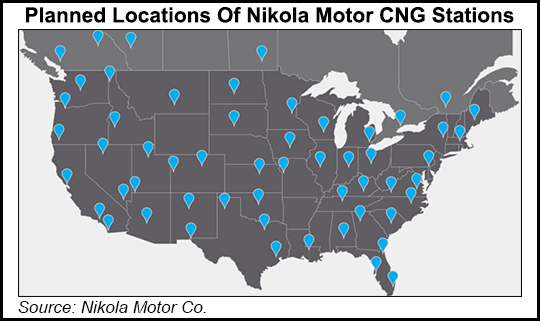 While there remain skeptics and many questions about whether the privately held Nikola Motor Co. (NMC) can actually pull off its challenging vision, CEO Trevor Milton, the principal investor in NMC, talks confidently about marrying a natural gas supply and fueling network to the manufacture of two completely different alternative fuel vehicles (see Daily GPI, May 19).

Milton contends he can deliver NMC’s own gas supplies and a chain of compressed natural gas (CNG) fueling stations that is still being pieced together. One of the vehicles — a combination CNG turbine-lithium battery-powered semi-truck, Nikola One — will have its first production model on the road before the end of the year, a Michigan-based NMC spokesperson told NGI.

“Nikola owns its own gas reserves and wells,” said the spokesperson, adding that “ownership” can mean different things depending on the property.

“In some states, Nikola owns the mineral rights to U.S. Bureau of Land Management land where natural gas wells are located. In other states [the company] owns land outright with the wells on them or has bought the rights from landowners to the wells and mineral rights.”

There are no fueling stations in operation yet, and, in fact, the final decision of the Nikola brand for the fueling outlets has yet to be decided, according to the spokesperson. However, there are 55 locations already identified in 33 states and five Canadian provinces. Station construction is expected to begin in the next 12 months. They eventually will be branded with a name that includes Nikola, the spokesman said.

“Our site development team is in the process of either moving toward construction, buying the land, or partnering with other land and site owners. Each site is different.”

The locations are all interrelated within a 500-mile radius from any one station to another, company officials said. Over time, Nikola anticipates having hundreds of stations across the country.

In Oklahoma, family-owned Schwarz Ready Mix to complete a switch of its cement mix hauling trucks to CNG following a recognition three years ago that its outdated fleet needed replacements and upgrades.

Since an original purchase in 2013 of 16 Peterbilt 12-liter NGV model trucks, Schwarz has doubled its CNG-powered fleet to 32 vehicles out of 115 in the total fleet. It currently has 10 more CNG trucks on order, according to co-owner Phillip Schwarz.

The Schwarz fleet uses 550,000-650,000 gallons of fuel annually, so the switch to CNG has allowed the company to lower its carbon footprint considerably and pick up business with construction projects building to the national sustainability standards of Leadership in Energy & Environmental Design. More recently, California-based Clean Energy Fuels Corp., which was founded by Oklahoma-based oil/gas billionaire T. Boone Pickens, has begun developing two private fueling facilities for the Schwarz fleet.

One station is slated to be a compact, self-contained General Electric CNG-in-a-Box unit, for which Clean Energy provides maintenance support. Schwarz said “there are a lot of advantages to going the CNG route. I’m surprised more [fleet operators] are not doing it.”

In California, the Southern California Air Quality Management District (SCAQMD) has committed $52 million for hundreds of clean fuel trucks, half of which will be NGVs. Under the SCAQMD’s Goods Movement Program, funded by a statewide ballot proposition, SCAQMD plans to acquire 263 super-low nitrogen oxide ISL G near-zero engines from Cummins Westport (see Daily GPI, May 6).

With the new near-zero NGV engine, the Southern California Mobile Source Air Pollution Reduction Review Committee is expected to award $7.5 million in repowered transit buses and another $2.5 million to refuse collection truck fleets — $15,000 grants per transit bus and $25,000 per refuse truck. The call for requests for proposal will go out June 3 with applications accepted from July 5 through Jan. 6.

In addition, the two fleet operators have signed deals with AmpRenew to fuel a portion of their fleets at AmpCNG’s public access stations.

In station equipment, designer/builder J-W PowerFill Technology has developed a patent-pending system it promotes as increasing flow rates without increasing horsepower, significantly increasing the use of onsite storage, reducing start/stops of equipment, and ultimately improving customers’ fueling experience. J-W Power’s new design allows the compressor “to change the number of stages dynamically to use high pressure from storage to yield higher flow rates.”

Meanwhile, US Air Conditioning has upgraded its 10-year-old CNG fueling installation at its main distribution center in the City of Industry east of Los Angeles. It installed a Galileo Nanobox system, fueling 32 CNG vehicles, and also servicing 24 vehicles of US Air Conditioning employees who personally switched to CNG vehicles. The company provides the fuel and service to employees at no charge.

On the other side of the nation in Wilmington, NC, Waste Industries has launched a new fleet of 22 CNG-fueled refuse trucks to service homes and businesses in two counties. Waste Industries said the upgrade represents a $7 million investment, including the fueling equipment, along with the vehicles and NGV upgrades. The company has a new private time-fill CNG facility that handles up to 40 vehicles at the same time.