Midstream operators are trying to capitalize on the rapidly growing interest in deepwater port crude oil export capabilities along the Gulf Coast with two separate pipeline projects that could be capable of transporting more than 1.5 million bbl combined. 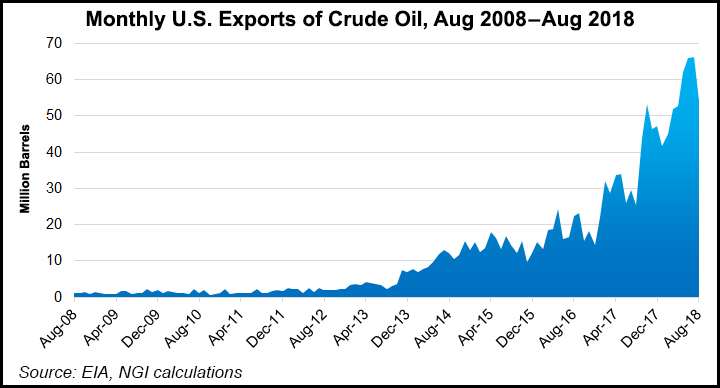 Houston-based Jupiter Energy Group launched a 90-day open season on Friday for its 650-mile crude oil pipeline that would move supply from the Permian Basin of West Texas to Brownsville, which sits on the tip of the coast.

The privately held midstream operator, which provides logistics and offtake solutions for oil and gas plants, is seeking binding shipper commitments for up to 1 million barrels on the Jupiter Pipeline, a 36-inch diameter system that could be operational in late 2020.

“Construction of the Jupiter Pipeline is a key element in achieving our vision of providing our customers with the best hydrocarbon solutions from the wellhead to the world,” President Albert Johnson said.

Committed shippers on the Jupiter project would have the flexibility of selecting a term of five, seven or 10 years, with nondisclosure agreements due by Dec. 31.

As designed, the Jupiter Pipeline would have origination points in West Texas near Crane and Gardendale/Three Rivers and an offtake point in Brownsville. The sponsor claims the pipeline would be the only one moving oil from the Permian that could access the three deepwater ports in Texas (Houston, Corpus Christi and Brownsville) and would have direct access to a very large crude carrier (VLCC) loading facility offshore Brownsville.

In October, the Port of Corpus Christi and The Carlyle Group announced plans for the first onshore crude oil export terminal capable of servicing VLCCs as a means to “open the global markets for U.S. oil producers, pipelines, their supply chains and customers,” Port officials said. VLCCs can transport up to 2 million bbl per voyage.

The Corpus terminal would be sited on Harbor Island and could include at least two loading docks, as well as crude oil tank storage inland across Redfish Bay on land secured by Carlyle.

Separately, the backers of the proposed Swordfish crude oil pipeline on Thursday extended the open season for its multi-diameter batched system that would have the ability to transport up to 600,000 b/d from existing facilities in St. James and Raceland, LA, to the Louisiana Offshore Oil Port (LOOP).

Swordfish, with an expected in-service of the first half of 2020, would also provide shippers with access to storage services, vessel loading, as well as connectivity to other carriers at the Clovelly Hub.

Crimson Midstream LLC and MPLX LP extended the open season, which began Oct. 17, to Jan. 31, citing reports from LOOP that “customer reports concerning its deepwater port export capabilities have risen sharply.” In addition, LOOP has indicated that the number of vessels loaded can be scaled to meet increasing market demand, the midstream companies said.