U.S. explorers took about a decade to claim and begin producing the huge onshore unconventional bounty. Now that they’ve got their rocks of plenty in hand, the task today is determining what to keep and what to toss, according to a Credit Suisse analyst. 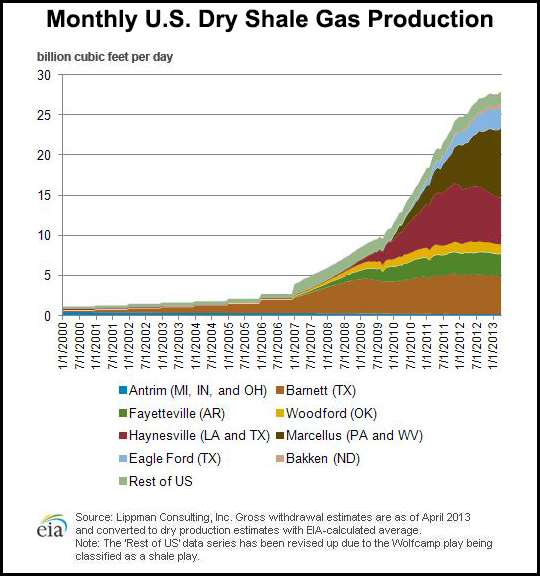 It’s now the “efficiency era” for unconventional producers, which have moved from the harried “acreage capture and production growth” mode, said U.S. E&P research analyst Arun Jayaram, who discussed the transition in a recent conference call. This new era is “not about volumes, but value.”

There’s so much natural gas, and it appears that there’s going to be a lot of U.S. oil produced as well. Culling the resources ensures there’s enough capital and that it makes a return, he said. Since nearly all U.S. E&Ps remain weighted to natural gas by 60-65%, according to Credit Suisse, operators have to be able to earn or even outperform, even with low commodity prices.

Using a “positive rate of change,” and differentiating from the pile, “good rocks can outperform gas prices.”

A big focus today for E&Ps is to remain on top of numbers in their “franchise assets,” said Jayaram. An operator can have a long list of acreage holdings, like Chesapeake Energy Corp. But the “franchise” has to be “the” play that makes the numbers day in and day out. It may have been a franchise at one time and/or remains so today in one form or another. Devon Energy Corp. had the original gas shale “franchise,” the Barnett. Today it’s an oil/liquids franchise. For EOG Resources Inc., it’s the Eagle Ford. Range Resources Inc.’s is the Marcellus. Apache Corp. has been in the Permian Basin for decades, and it’s become the renewed onshore franchise. Southwestern Energy Co. still hearts the Fayetteville Shale.

It’s not just the unconventional acreage that a company may hold. It’s the quality of the assets, which provide value through capital efficiencies.

Where wells are “getting better, where costs are lower,” producers can make money, Jayaram said. And that’s important because he doesn’t think there are any new onshore fields left to discover. “That strategy appears to be long in the tooth…We have been pretty skeptical about new venture strategies, and skeptical on finding another Eagle Ford, for instance.”

Returns on the “best shale can be superior to the available returns in deepwater projects,” according to global energy research chief Ed Westlake. “Costs are still rising in the offshore, but they are flat or falling in shale. The sweet spots are already held in the best basins.” However, there are “emerging contenders” in the “super-rich Marcellus, core Delaware Basin and Utica/Upper Midland” of Michigan.

With no new discoveries to be had, “it’s better to focus on the rate of change story,” said Jayaram.

As an example, the rate of change in the Marcellus Shale “trumps a low gas price…because it’s at the low end of the cost curve,” said Jayaram. “Since operators started horizontal drilling in ’08 and ’09, the well results have continually gotten better. And we still think it’s in the early innings. Producers have shifted to development mode from acreage-capture mode. Now they are focused on increasing lateral lengths, completions. There’s still upside on the rate of change in the Marcellus…”

Using four years of production data, Credit Suisse determined that gross estimated ultimate recoveries (EUR) from northeastern Pennsylvania “are significantly higher than even the most bullish estimates…We estimate the average well is 9.0 Bcf or higher gross in four key northeastern counties. This compares to the average U.S. gas well of 1.3 Bcf. Our model assumes EURs of only 5.7 Bcf/d on a blended basis.”

Marcellus operators are increasing the lateral lengths and reaction control system completions, said Jayaram. Range has increased its lateral lengths to 3,900 feet from 3,700 feet, he said, while the fractured stages have risen to 18 from 14. The “three Marcellus Musketeers,” Range, Cabot Oil & Gas Corp., and EQT Corp. “have been off-the-chart performers. The positive rate of change has trumped the decline in natural gas prices as the Marcellus is at the low end of the cost curve.”

Producers also are scrambling to the Permian Basin, where several formerly drilled formations like the Midland and Delaware basins are reporting huge initial production (IP) rates and EURs, said Westlake. From 2012 to 2019, Credit Suisse is “assuming a 25-30% increase in the horizontal rig count. The IP rates also are expected to rise 25% versus the currently observed rates.”