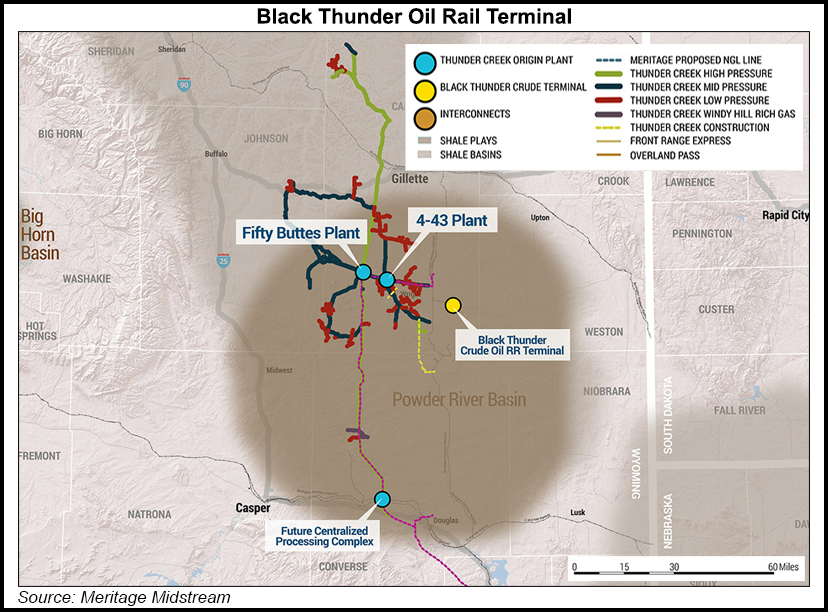 A 99-car train operated by Union Pacific Railway carried 70,000 bbl of Wyoming crude to a refinery on the East Coast for the terminal’s anchor shipper, Black Thunder Marketing LLC, a spokesperson for Meritage said. Meritage is touting the new rail facility as providing “rail-to-market optionality” for PRB crude oil production.

The new terminal is served by BNSF Railway, as well as Union Pacific, and its strategically located in Wyoming’s energy rich Campbell County.

The overall development of the terminal includes two phases. In the first phase, truck-to-train services have been fully operational at Black Thunder since March, the spokesperson said. The current transload capacity from the trucks totals 10,000 b/d. Landing and loading space is available.

In the second phase, high-speed loading facilities are expected to begin operations later this year. This phase also included the development of four 100,000-bbl storage tanks and a 15-car rack system capable of loading 15 to 18 cars/hour. “Target total loading time is 15 hours,” said the Meritage spokesperson, adding that the high-speed service is expected to be ready next year.

The spokesperson noted that the location at the mining complex provides “ample room” for additional expansion and the rail cars used to transport the first shipment all are new and meet the latest stringent safety standards adopted earlier this year by the American Association of Railroads.

The development of the Black Thunder facility as a “dual-served, multi-shipper unit train facility” is a first for Wyoming, according to Meritage CEO Steven Huckaby, who called the new rail terminal “a unique and important strategic asset” for PRB oil producers. He said it is the only crude rail terminal in Wyoming located at a coal mine.

“We created significant cost savings for our crude oil customers as well as efficiencies at Black Thunder by successfully repurposing some of the mine property and rail infrastructure for transloading crude oil. It is a great location in the center of drilling and production activity.”