Another week of retrenchment saw the U.S. rig count drop five units to 851 as of Friday, including a slowdown in the Marcellus Shale, according to the latest data from Baker Hughes Co. (BKR). 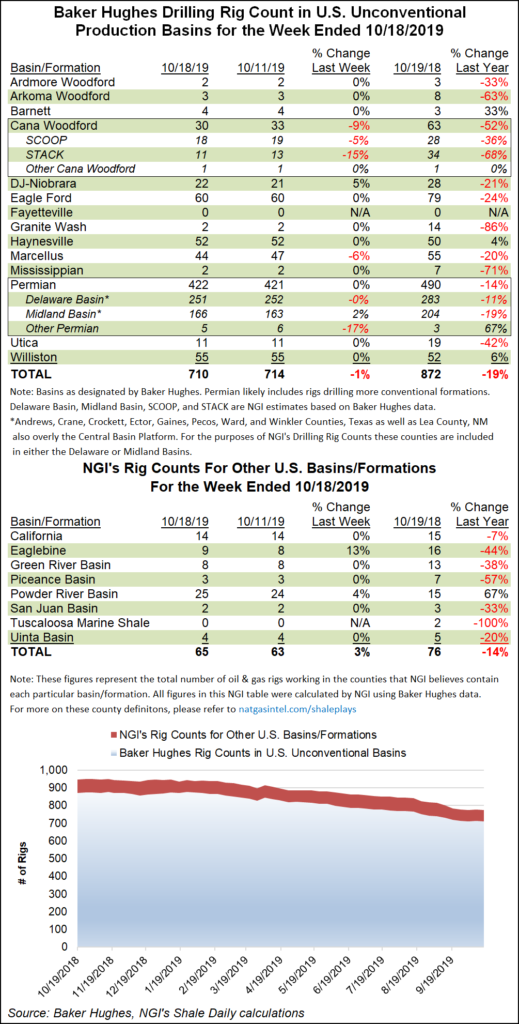 The oilfield services company, formerly Baker Hughes, a GE Company, officially has rebranded with a new ticker symbol. But the new name did not bring a new outlook for the domestic oil and gas patch, which continued its descent during the week because of a six-rig dropoff in natural gas-directed drilling. Including the addition of one oil-directed rig on the week, as of Friday the combined U.S. count lagged its year-ago total by 216 units.

Four rigs exited on land, while the departure of two Gulf of Mexico units was partially offset by the deployment of one unit to inland waters. Horizontal rigs dropped by five week/week, while the number of directional and vertical units remained flat.

In Canada, four oil-directed rigs exited, partially offset by the addition of one gas-directed, leaving the Canadian tally at 143 for the week, down from 191 a year ago. The combined North American rig count ended the week at 994, down from 1,258 at this time last year.

Among plays, the gassy Marcellus dropped three rigs to finish the week with 44, down from 55 a year ago. The Cana Woodford also dropped three rigs week/week to end at 30, less than half of the 63 rigs active in the year-ago period.

Meanwhile, the Permian Basin picked up one rig on the week, as did the Denver Julesburg-Niobrara, BKR data showed.

Among states, Pennsylvania saw four rigs exit the patch during the week, dropping to 28 overall, down from 44 a year ago. Oklahoma and Louisiana each dropped two rigs, while New Mexico and West Virginia each dropped one.

Texas added three rigs overall week/week to climb to 423 rigs, versus 540 in the year-ago period. Ohio and Wyoming each added one rig.

Schlumberger Ltd., the world’s largest oilfield services operator, reported an 11% decline in North American revenue during the third quarter, which was offset by 8% growth in international operations.

“Market uncertainty, however, is weighing on future oil demand outlook in a climate where trade concerns are seen as challenging global economic growth.”