Promising cleaner operations and less maintenance, Vancouver, BC-based Cummins Westport Inc. introduced a new mid-range 6.7-liter dedicated natural gas vehicle (NGV) engine for use in traditional (Type C) school buses. It is now in field trials and will be in full production the middle of next year.

Dubbed the ISB6.7 G, Cummins Westport rolled out the new engine at the North American School Bus Show — STN Expo Conference and Trade Show in Reno, NV (July 25-28). It is based on Cummins’ ISB6.7 diesel engine platform, which is touted as the industry leader in the Cummins mid-range family of engines.

“An important feature of the new engine is a three-way catalyst [TWC] after treatment that is packaged as a muffler and is maintenance free,” a Cummins Westport spokesperson said. There is no need to have the particulate filter or selective catalytic reduction after treatment required with a diesel engine.

Preliminary specifications include a range of ratings up to 260 horsepower, 660 pound-feet of torque and automatic transmission capability to meet customers and original equipment manufacturer (OEM) requirements, the spokesperson said. The engine will be produced in Cummins’ Rocky Mount plant in Whitakers, NC.

While Congress fixed a tax inequity for LNG as a transportation fuel in July (see Daily GPI,July 31), the National Conference of Weights and Measures (NCWM) meeting earlier in July in Philadelphia failed to adopt the diesel gallon equivalent (DGE) standard for natural gas, causing disappointment among NGV advocates.

Currently 26 states use DGE for taxation of LNG and ten have passed legislation or approved regulations recognizing the DGE as a standard for dispensing natural gas as a transportation fuel, according to NGVAmerica, which vowed to continue working with allies at the state level to get the DGE standard recognized nationally.

NGVAmerica President Matt Godlewski attributed the WCWM’s lack of action to a “dysfunctional voting process” that ignored principles of transparency, uniformity and consistency. But he said state legislators “understand the importance of this issue.”

Meanwhile, the push to open more CNG fueling continued in Florida, Iowa and Indiana. Fort Lauderdale-based Patriot CNG broke ground on a new fueling station for the city of Rockledge, FL, on the Atlantic coast east of Orlando. It will be located at the Brevard County service facility.

In Indiana, Gain has a new CNG station for trucks operated by Delco Foods, a four-lane station that CMD helped package. It will support 17 Delco trucks, including six Freightliner tractors with Agility Fuel Systems CNG arrays, and a Kenworth truck with a Trilogy CNG array.

Internationally, Xebec Adsorption reported that it has supplied the equipment for a landfill gas upgrading installation in northeast China that is now being used to fuel a taxi fleet in Anshan, China. The upgrading system is based on Xebec’s fast-cycle PSA pressure swing adsorption technology with the equipment assembled and integrated in Xebec’s Shanghai facility to meet Chinese code and certification requirements. 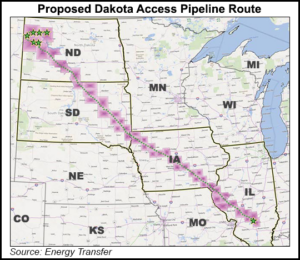 Parties to ongoing litigation challenging the continued operation of the Dakota Access Pipeline LLC (DAPL) have agreed to a schedule that would see the last brief filed in mid-December, raising the prospect that a ruling in the case won’t arrive until after the election. Lawyers in the case, between the Standing Rock Sioux Tribe and…