New Mexico’s fiscal health is undergoing an “unprecedented sea change” with global markets signaling the “beginning of the end” for the state’s financial reliance on fossil fuels, the Institute for Energy Economics and Financial Analysis (IEEFA) reported Tuesday. 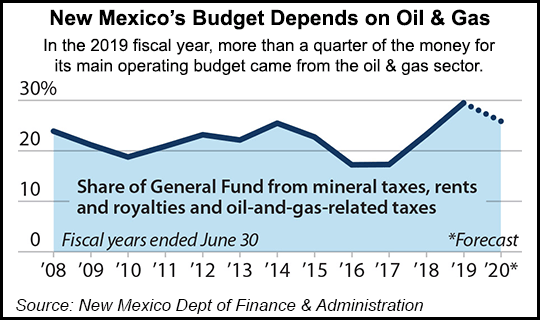 “Leases, royalty payments and taxes from the oil and gas industry have directly accounted for as much as 30% of the state’s revenues over the last dozen years,” contributing more than 25% of last year’s operations budget, they noted.

“Even in its most optimistic scenario, the New Mexico Legislative Finance Committee puts the average price of oil at only $43.50/bbl through fiscal year (FY) 2022,” said Sanzillo. “It’s an improvement over the historic lows hit in April 2020, but still far below what’s needed to return New Mexico to robust fiscal health. The situation is unlikely to improve anytime soon.”

Much of the sharp drop in revenue from FY2019 to FY2020 was blamed on a declining share from the oil and gas sector. In response, Gov. Michelle Lynn Lujan Grisham and the legislature trimmed the initial FY2021 budget of $7.6 billion by roughly $415 million.

“At the time of those painful budget negotiations, some state policymakers looked with optimism toward a post-pandemic future, pointing to recent record levels of oil production in the state and ExxonMobil’s plan to nearly triple Permian Basin oil output by 2024. Indeed, a ramp-up in drilling and oil well activity in FY2019 had resulted in a 47% year/year increase in oil production in New Mexico,” the co-authors noted.

“But it is a mistake to confuse production with profits.” The surplus oil and gas production “contributed to the industry’s weak finances, even as it masked the fiscal risks New Mexico faces from its heavy reliance on oil and gas revenues.”

ExxonMobil Senior Vice President Neil Chapman in July said oil supply was expected to exceed demand for months, “and we anticipate it will be well into 2021 before the overhang is cleared and we return to pre-pandemic levels.”

ExxonMobil, one of the leading operators in New Mexico, had more than 50 rigs running across the Texas-New Mexico stronghold as of last fall. At the end of June it was down to 30, “and we expect to cut that number by at least half again by the end of this year,” Chapman said.

Weak demand growth “has created headwinds that will likely impede a rebound,” according to IEEFA. “As a result, the sector is likely to face even stricter financial constraints in the future.”

Since last spring, oil prices have edged higher. For the market to get on track, however, prices would need to average around $80 for several years. That would allow oil and gas reserve values to increase “with solid expectations of continued increases.”
In addition, higher oil prices would reduce company debt levels and improve credit ratings while the rate of bankruptcies should drop. Debt then could be used primarily to create revenue-producing assets. In turn, “state-owned oil and gas enterprises and host governments would be fiscally and politically stable,” with rising demand unfettered by competition.

“These features need to be in alignment, a scenario that is highly unlikely,” said the authors.

High infrastructure costs, combined with oversupply, energy demand shifts and increasing competition from alternative resources “have permanently weakened the industry’s financial position. Consequently, the industry’s future is likely to be one of long-term decline,” the analysis found.