A judge in U.S. District Court for the District of New Mexico on Monday held a hearing on a lawsuit by environmental groups that may decide if the Mancos Shale, part of the San Juan Basin in northwest New Mexico, continues to be developed in the next few years. 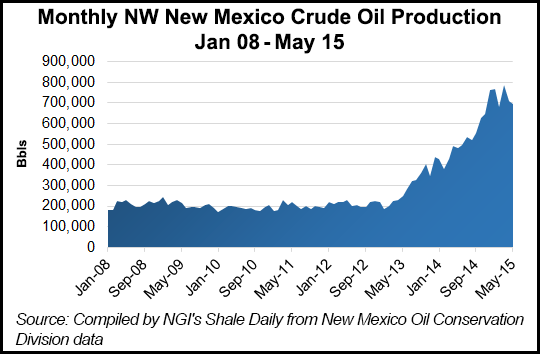 The filing earlier this year by four groups, including the WildEarth Guardians and the Natural Resources Defense Council, alleges as inadequate the Bureau of Land Management’s (BLM) environmental impact assessment of drilling in the Mancos near the Chaco Culture National Historical Park. The groups want a temporary injunction to halt ongoing development and force BLM to reassess the environmental impacts, claiming full-scale development was allowed to begin “despite the absence of a required programmatic plan and environmental review.”

Producers such as BP America, ConocoPhillips, Encana Corp. and WPX Energy Inc., which are developing acreage in the Mancos trend, have joined the lawsuit in support of BLM.

U.S. District Judge James Browning indicated he would rule on the injunction within a month. Steve Henke, president of the New Mexico Oil and Gas Association (NMOGA), attended the hearing, and a spokesperson told NGI’s Shale Daily that there was thorough, detailed questioning. NMOGA officials are cautiously optimistic that Browning “was able to gain a full appreciation for what the issues are.”

The industry emphasized the economic setback the region would experience from a halt in the drilling. Encana and WPX collectively have drilled more than 100 wells and invested more than $1 billion in the Mancos in the past four years (see Shale Daily, June 22; Sept. 19, 2012). An attorney for the operators told the judge that “enormous harm” would be caused by a halt to the development.

The plaintiffs countered that there is the threat of “imminent destruction” to the Greater Chaco landscape in this part of the San Juan, calling it a “unique environmental and cultural setting.” The Navajo-led “Dine Citizens Against Ruining Our Environment” is part of the plaintiff group coalition.

“Unless the court issues a preliminary injunction to maintain the status quo on the ground pending resolution of the merits of this case, BLM will continue to approve Mancos Shale drilling permits, allowing construction of roads, pipelines and well pads, along with drilling and fracking shale oil wells, in violation of the law,” the groups argued in their May request for the preliminary injunction.

BLM currently is allowing permits under a 12-year-old resource management plan (RMP), which is in the process of being amended to take into consideration unconventional drilling techniques that include horizontal drilling and hydraulic fracturing (fracking).

In a separate case, Browning in January struck down a fracking moratorium in Mora County, NM (see Shale Daily, Jan. 21). If he were to grant the drilling injunction, some stakeholders predict the temporary ban could stay in place for three or four years. New Mexico Gov. Susana Martinez has urged Interior Secretary Sally Jewell to support BLM’s ongoing process for permitting and pursuing RMP amendments in the court fight. Martinez is concerned that a win for the plaintiffs could jeopardize production in the San Juan Basin.