A Houston-based exploration and production company (E&P) with new approvals to step up some wells in the San Juan Basin has caused a controversy as New Mexico gets ready for an incoming Democratic governor to replace the incumbent Republican. 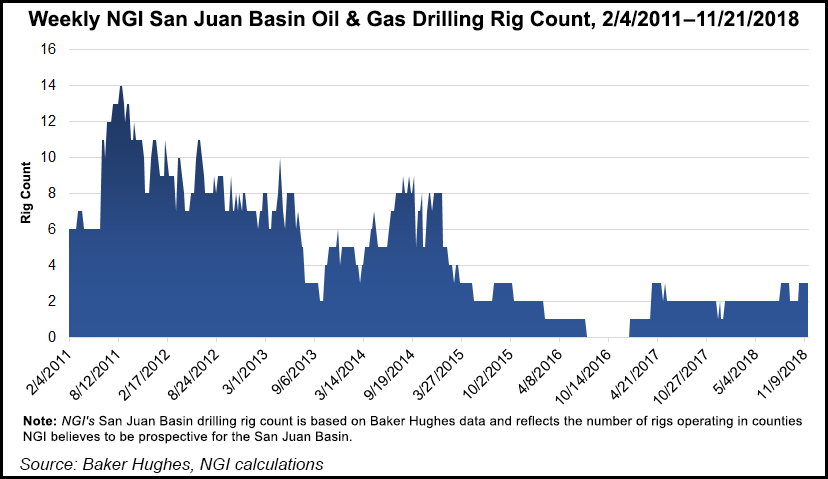 In question is an approval last month by the New Mexico Oil Conservation Commission (NMOCC) of three exceptions to well density rules for Hilcorp Energy Co. for wells in the Blanco-Mesaverde Gas Pool in San Juan County.

The issue has gotten “twisted,” and is being misunderstood as a result, according to spokesman Robert McEntyre of the New Mexico Oil and Gas Association.

“I think there is some confusion between ‘pool rules’ and applications for permits to drill; they are two entirely different things,” McEntyre told Shale Daily. “What is really at issue is how many wells are allowed in a given pool.”

Companies come one at a time to change pool rules, but Hilcorp is attempting to bundle a group of proposed wells, he said.

State Land Commissioner Aubrey Dunn has since removed his agency’s appointee to the NMOCC for supporting the Hilcorp proposal. An aide to Dunn told NGI’s Shale Daily that he disagreed with the vote to support the drilling plan.

With more than 5,000 active wells and 54% of its assets centered in the San Juan, Hilcorp is specifically operating in the Blanco-Mesaverde Gas Pool, which covers large portions of the basin. Currently, the pool rule restricts drilling to four wells for every 320 acres.

A Hilcorp spokesperson said the E&P is concerned that the pool rule is misunderstood; the state periodically amends the pool rules as a means of maintaining efficient production.

“Hilcorp has identified thousands of existing wells capable of production from the Blanco-Mesaverde Gas Pool, but the current rule prevents the company from implementing its plans, so it is asking the NMOCC to adjust the pool rule to allow up to eight producing wells every 320 acres,” the spokesperson said.

Hilcorp is not asking for approval of new wells, and it is not proposing to change the state’s process for that. “If any operator in the Blanco-Mesaverde Gas Pool intends to drill an added well, it would have to go through the standard approval processes,” the spokesperson said.

Critics of the state approvals, including environmentalists and local landowners, have suggested that the approvals could be reversed by Gov.-elect Michelle Lujan Grisham, but McEntyre said that is unlikely.

“The commission doesn’t really convert a decision, because once they give an operator a permit or permission to do something in the oilfield, the action is really considered a property right and cannot really be changed,” McEntyre said. “There is no process to roll back these decisions.”