While Mexico’s gas-rich San Juan Basin turned up another declining year of natural gas production in 2012, state officials and some exploration and production (E&P) companies are maintaining interest in the state’s overall oil, liquids and gas businesses. 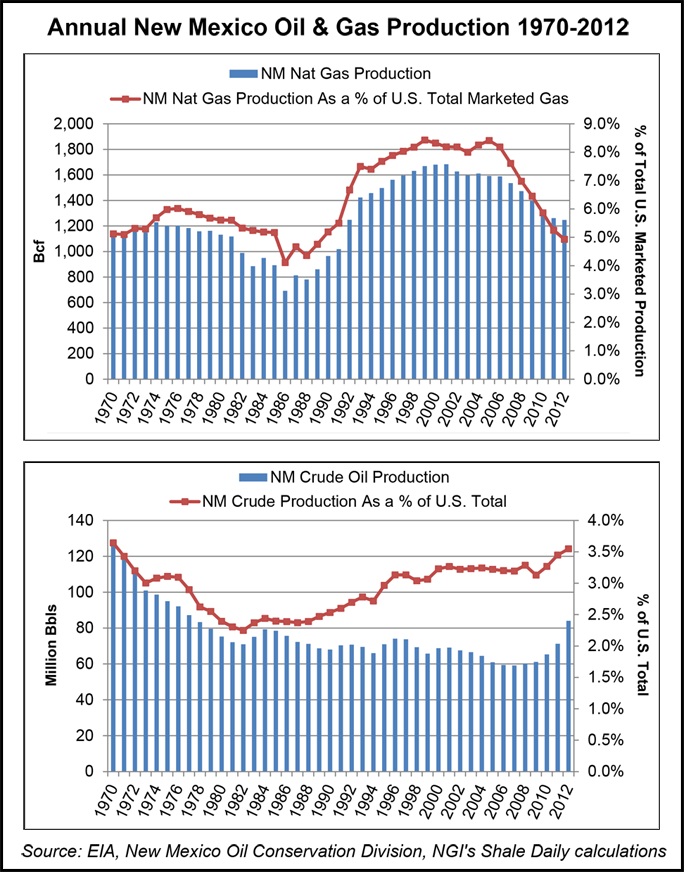 At least one oil E&P company has said it is “encouraged” by what it has found so far this year in the San Juan.

Despite reporting a sixth consecutive year of declining gas production (see Shale Daily, March 13), the cabinet secretary overseeing New Mexico’s Oil/Gas Conservation Commission (OGCC), which is predicting that the decline will continue this year, has reiterated in local news media that the state has a number of initiatives for boosting gas demand.

John Bemis, secretary for energy, minerals and natural resources, in Gov. Susana Martinez’s administration, attributed most of the San Juan Basin decline to “another warm winter” leading to depressed gas prices. However, Bemis characterizes natural gas as having the potential to “be one of the leading energy sources of the future.”

“While it is true that natural gas production is down in the San Juan Basin because of another warm winter leading to depressed prices, there is little doubt that natural gas will be one of the leading energy sources in the future,” Bemis said. “New Mexico is committed to doing everything possible to further the consumption of this resource that is abundantly available in the state.”

Separately, Canadian-based Encana Corp. is keeping a close eye on New Mexico, according to officials operating out of its Denver offices. According to independents in the San Juan, Encana is quietly leading an uptick of interest, particularly in horizontal drilling for oil and liquids.

A Denver-based Encana spokesperson told NGI‘s Shale Daily that the San Juan is an area where Encana feels it needs to develop more information, but it is an area of interest that the company intends to continue to explore. Encana confirmed that it is continuing to explore light oil plays in the San Juan. To date, Encana has drilled 13 gross wells, 11 of which have been completed.

“Successful operation execution continues to drive well costs down,” Encana said. “The company is encouraged by the initial results of it 2013. This year we intend to run a two-rig program in the area.”

Meanwhile, on the demand side, Bemis said the Martinez administration is pushing a number of initiatives, including joining a consortium of state working with major vehicle manufacturers to bring more natural gas vehicles (NGV) into the state’s and other fleets, and New Mexico has reached a settlement with federal and energy sector organizations that will result in building more gas-fired power generation units in the state to replace older, coal-fired units.

“These are the kinds of efforts that will boost demand for natural gas in the future,” Bemis said.