While critics and environmental activists are unhappy, the oil and natural gas industry is celebrating long-awaited changes in New Mexico’s rules for disposal of drilling waste known as the “pit rule.” 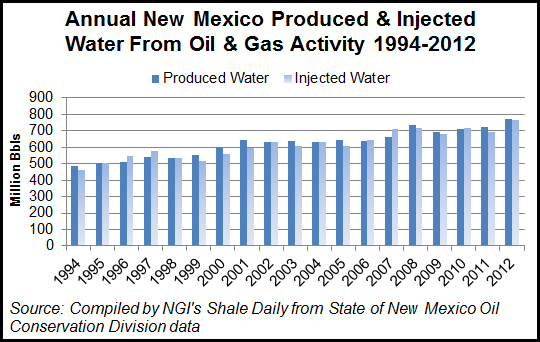 Fighting for changes to tougher requirements imposed by a previous governor, the New Mexico Oil/Gas Association (NMOGA) hailed revisions made earlier this month, which include multi-well fluid pits that more effectively handle the use and reuse of water for hydraulic fracturing.

The New Mexico Oil and Gas Conservation Commission (OGCC) carried through on a campaign promise by Gov. Susana Martinez to revise the requirements to be more along industry lines, finalizing changes last Thursday that had been endorsed by NMOGA and other industry groups.

The issue has been simmering since Martinez won the statehouse following Gov. Bill Richardson’s retirement. Richardson’s administration in 2008 had stiffened the rules, causing a lot of pushback from industry. In January 2013 the OGCC resumed hearings, but alienated environmental groups by refusing to take additional testimony in the case.

“The OGCC was extremely thorough in its analysis of the evidence presented by all parties in developing the new pit rule,” said Steve Henke, NMOGA president, on the group’s website, noting the process took 18 months since the industry proposed changes to the three-member state commission. “Due to the extremely technical nature of the rule, the industry is now analyzing the rule in its final form to determine what impact the changes will have on operating methods.”

The new rule as outlined by the OGCC added definitions and clarified parts of the 2009 pit rule, and there are also provisions in the new rule that “govern a type of pit that previously was unrecognized by the state rule: the multi-well fluid management pit,” the document said. “The pit rule is a regulatory system that addresses permitting, siting, closure methods, operation, design and construction, reclamation, re-vegetation and constituent level standards.”

Henke characterized the changes as including the multi-well fluid pits “to more effectively handle the use and reuse of water for hydraulic fracturing, allowing for burial of drilling cuttings onsite when the distance to groundwater is sufficient and the composition of cuttings is environmentally benign.” It also will allow the use of lined drilling reserve pits “in certain specific circumstances,” he said.

There are a number of what the industry considers “highly technical testing methods” called for in the new regulation that Henke said will have to be analyzed by an industry team in the coming weeks and months. In response to environmental critics, he said that expert witnesses in the testimony leading up to the new regulations confirmed that environmental, groundwater and human health protections have been “painstakingly addressed” by the OGCC.

Critics contend that the proposed changes by the association would eliminate almost all references in the state rules to closed-loop systems, which the oil/gas industry claims are expensive; the environmental groups counter that there is no hard data to back up that contention. There is also concern about changes in how low-chloride waste is handled and a provision allowing operators to make “reasonable estimates” about groundwater wells when specific information is lacking.

Nevertheless, the final changes included a state objective for a pit rule as being the regulation of “pits, closed-loop systems and below-grade tanks and sumps used in connection with oil/gas operations for the protection of fresh water, public health and the environment.”