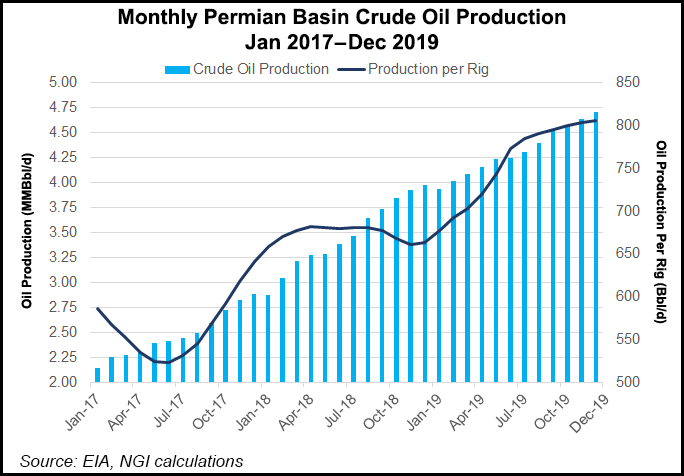 Oil output from the southeastern corner of the state, where it shares a portion of the Delaware sub-basin with Texas, “may have surpassed the 1 million b/d threshold in November or possibly in December 2019,” analysts said.

Uncertainty in whether the mark was hit in November or December is associated with the “standard production report delay” for wells that were fractured (fracked), completed and turned to sales in 4Q2019.

For example, Matador Resources Co. as of mid-January had delayed reporting more than 35,000 b/d for November from proved, developed producing wells, according to the analysis.

More than half of New Mexico’s oil production is from wells “set in 2019,” which indicates an area with the “youngest base production. This is putting pressure on base decline as younger wells decline faster.

“That said, by November 2018, over 57% of oil production was from the 2018 vintage, which did not prevent oil production from growing by over 25% in the following 12 months,” analysts noted.

Similar to other Lower 48 wells, as producers have improved their efficiencies, initial production rates have continued to increase from New Mexico wells, as measured by the reported oil output on a per-well basis.

According to the most recent Drilling Productivity Report by the Energy Information Administration (EIA), Permian oil output from Texas and New Mexico combined is expected to increase month/month in February to 4.8 million b/d from 4.76 million b/d.

“Based only on wells with at least three months of reported production, 3Q2019 marks the best vintage in the New Mexico Delaware sub-basin, with an average performance of 78,000 b/d in the first three calendar months on production,” said Rystad analysts. “The continuous increase in the average perforated length in the basin is seen as the main driver of substantial well productivity gains.”

With better drilling techniques improving extraction volumes, the Permian’s Bone Spring formation within the Delaware should continue to drive growth in the sub-basin, the EIA said last month. Updated maps and geologic information for the play include formation geology, deposition history and regional tectonic features.

“The number of producing wells in Bone Spring grew from 436 wells in January 2005 to 4,338 wells in mid-2019,” EIA noted. The wells also have become more productive, researchers said.

Many exploration and production companies touted their findings within the Bone Spring during third quarter calls.

EOG Resources Inc. CEO Bill Thomas said the Houston producer had identified more targets in the Wolfcamp and Third Bone Spring that could add 1.6 billion boe net of resource potential. The targets, he said, are economic at a flat $40/bbl oil price and a flat $2.50/Mcf gas price.

One of the most active operators by far in the Delaware is ExxonMobil Corp., which is scheduled to issue its fourth quarter results on Friday. The supermajor made a transformative move in the Permian in 2017 by capturing 275,000 acres, mostly in New Mexico, in a $6.6 billion deal with the legendary Bass family.

ExxonMobil ended September running 55 rigs and 10 completion crews across the Permian, with volumes up 70%-plus year/year and 7% sequentially at 293,000 boe/d.

New Mexico for 2019 reported record revenue of $3.1 billion from the oil and natural gas sector, nearly one-third higher than the $2.2 billion in 2018.