At a torch-passing of sorts Wednesday, both outgoing and incoming CEOs for Marathon Oil Corp. had plenty to say about the Bakken and Eagle Ford shale plays, but new CEO Lee Tillman spoke more loudly about future opportunities during a second quarter earnings conference call in which results were said to be up sharply. 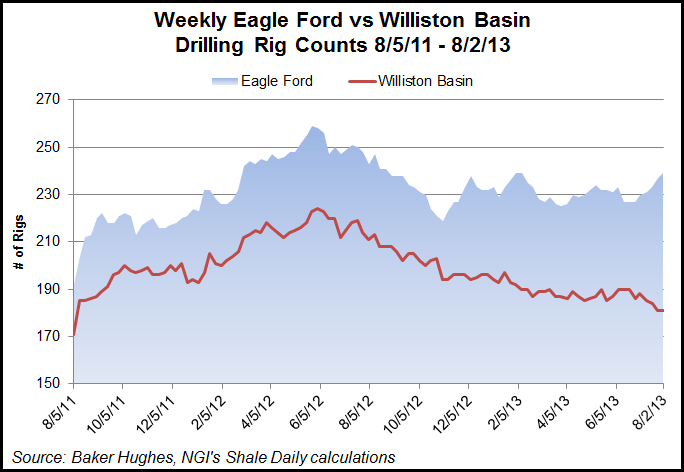 While analysts and Marathon executives agreed that production was declining in Marathon’s international plays, the questions and responses were robust on the two U.S. shale plays.

“We have a lot of running room in both of those areas,” said Tillman, promising to talk in more detail about the prospects in December at a scheduled analyst conference in New York City when more of the “science” work now ongoing on the two plays will have been completed.

The new CEO is not writing off international activity where Marathon is looking at “high-impact exploration wells in some key places around the world,” and the company remains open to acquisitions “that make sense for our portfolio. Tillman said Marathon specifically will continue to “look for bolt-on acquisitions in North America” that are accretive to its existing portfolio.

For an analyst that was concerned about the company’s rate of acceleration in the Eagle Ford particularly, Executive Chairman (outgoing CEO) Clarence Cazalot said that other players in the area are more advanced in their overall understanding of the reservoir in terms of potential downspacing and the geology changes across the Eagle Ford.

In response to another question, Cazalot indicated that in both the Eagle Ford and Bakken, infrastructure bottlenecks of the recent past years are now being cleared away, so acceleration is “certainly an opportunity we have [there], and we certainly will look at the potential to accelerate our development.” He punctuated this thought with the fact that Marathon has turned up good results thus far in the Three Forks part of the Bakken.

Getting the science right is still a vital part of the oil/gas business, Tillman stressed in response to a question. “A great example of that is what we’re doing in Eagle Ford with downspacing; we’re being methodical but also aggressive in our approach to technology there.” He said his new job as CEO requires that he finds more ways to “bridge the gaps” between the technical, financial and strategic parts of the business.

Tillman said several times that he sees extensive “running room” throughout the U.S. plays. “It is a tremendous opportunity,” he said, adding that he thinks Marathon is doing a good job of ramping up its efficiency and reliability in both the Eagle Ford and Bakken.

The weekly rig count in the Eagle Ford is down from a peak of 258 at the beginning of June 2012, but it has remained above 230 since December and increased to 239 on Aug. 2, according to Baker Hughes. Rig counts in the Williston Basin, on the other hand, have declined steadily since mid-2012, falling to 181 at the beginning of this month from a high of 224 on June 1, 2012.