The global natural gas trade is seen growing in line with global consumption over the next 20 years, with imports and exports playing an increasingly vital role in the world’s economy, according to BP plc. 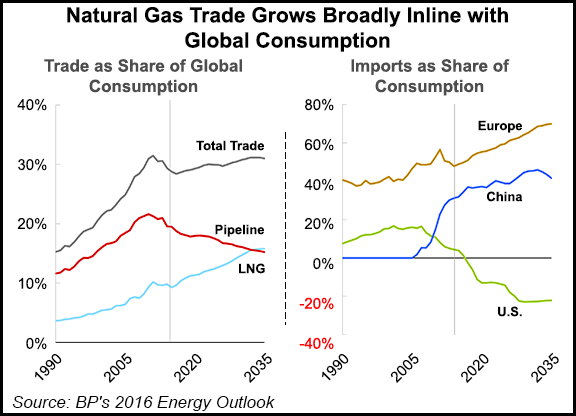 The BP Energy Outlook for 2016, the annual compendium issued by the supermajor, was published on Wednesday, outlining forecasts for fossil fuels, renewables and carbon emissions. The project, pulled together by BP’s economics team and led by chief economist Spencer Dale, is not tied to the producer’s portfolio, but a road map of what may be in store over the next two decades.

Group CEO Bob Dudley, speaking in London via webcast, noted that 5,000-plus people were watching, a 40% jump from a year ago, likely because of sinking oil and gas prices.

“In the middle of a downturn in oil and gas prices, it is important not only to adapt to the current tough conditions, but also to prepare for the next set of challenges,” Dudley said. “Energy is a long, wavelength industry, and we need a long-term perspective of how the energy landscape we operate in is likely to evolve. As this year’s outlook demonstrates, the world is going to continue to demand growing supplies of energy, but the mix of those supplies is changing and becoming less carbon-intense. However, further policy action may be necessary to meet international targets to limit carbon emissions.”

The Energy Outlook considers a base case, outlining the “most likely” path for energy demand by fuel based on assumptions and judgments about future changes in policy, technology and the economy, and develops a number of alternative cases to explore key uncertainties. In the base case, world gross domestic product more than doubles, but unprecedented gains in energy efficiency mean that the energy required to fuel the higher level of activity grows by only around one-third to 2035.

“Significant changes” are expected in the energy mix, as lower-carbon fuels grow faster than carbon-intense fuels, Dale said. And while natural gas demand growth has been slower than expected, but that’s not expected to last.

“The growth of gas consumption has been weaker than expected in recent years, as gas has been crowded out by cheaper and more abundant coal and, in Europe, also by the rapid growth in renewables. As a result, gas consumption in 2030 is expected to be around 5% lower than in the 2011 outlook” (see Daily GPI, Jan. 21, 2011).

Significant downward revisions were made in this year’s outlook to gas demand in Europe, the Middle East, and developing Asian countries.

“But this recent weakness in the growth of gas is not expected to persist, with global gas demand projected to grow at 1.8%/year over 2015-2030, similar to the 2011 outlook,” Dale said. “The judgment that the recent weakness in gas consumption will not persist is based on the view that strong supply growth, particularly of U.S. shale gas and liquefied natural gas (LNG), combined with stronger environmental policies, will allow gas to compete against coal in Europe and Asia, as well as in North America.”

The international gas trade is expected to grow “broadly in line with global consumption, such that the global trade share of gas remains around 30%,” said the chief economist. “But within that, LNG trade grows twice as fast as consumption, with LNG’s share of world demand rising from 10% in 2014 to 15% in 2035.

“Over 40% of the increase in global LNG supplies is expected to occur over the next five years as a series of in-flight projects are completed. This equates to a new LNG train coming on stream every eight weeks for the next five years. By 2035, LNG surpasses pipeline imports as the dominant form of traded gas. The growing importance of LNG trade is likely to cause regional gas prices to become increasingly integrated,” a point that he made in last year’s forecast (see Daily GPI, Feb. 17, 2015).

The growth in LNG trade “coincides with a significant shift in the regional pattern of trade. The U.S. is likely to become a net exporter of gas later this decade, while the dependence of Europe and China on imported gas is projected to increase further.”

Specifically in North America, economists expect to see to 2035:

The growth rate of carbon emissions over the period is seen falling by than half relative to the past 20 years, rising by 0.9% a year, reflecting “in almost equal parts, faster improvements in energy efficiency and a reduction in the carbon intensity of energy,” Dale said. “But carbon emissions are still projected to be growing, suggesting the need for further policy action. A meaningful global price for carbon is likely to be the most efficient mechanism through which to achieve an even faster transition to a low carbon world.”