A slowdown of crude oil and associated natural gas production in the Permian Basin, combined with new infrastructure and capacity releases in Mexico, could help narrow the discount of Waha natural gas prices to Henry Hub over the coming months and years, according to NGI’s Patrick Rau, director of strategy and research. 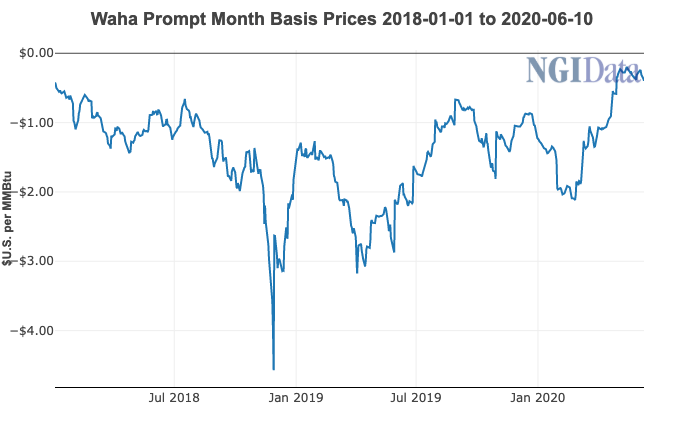 Prices at the Waha and El Paso Permian locations in West Texas have taken a beating over the last year or so, plunging negative on multiple occasions due to surging production and insufficient takeaway capacity from the basin.

The most recent occasion was on April 20, when the expiring prompt-month West Texas Intermediate (WTI) crude oil price went negative for the first time ever due to the massive oversupply and lack of storage capacity wrought by the Covid-19 pandemic.

But in the wake of coronavirus, the front end of the Waha forward curve has strengthened, reflecting the market’s expectation that Permian oil and gas output will not return to pre-Covid levels anytime soon.

Over the last year, the Waha prompt month basis differential has mostly ranged between minus $2.00 and minus 50 cents, NGI data show.

But since April 29, front month Waha basis has stayed within 50 cents of Henry Hub, which hadn’t occurred previously since January 2018.

Events in Mexico could help narrow the gap further, Rau said in a webinar on Friday co-hosted by Bloomberg and NGI, restoring the Waha price to its historically normal discount of around 15-20 cents to Henry Hub.

Rau said that while the Waha curve tends to move with changes in supply, “we believe that longer-term, the potential for a significant increase in gas exports [to Mexico] aren’t necessarily being baked into that curve. And the big driver there would be more capacity utilization for the pipelines that already exist.”

He said that only about 15% of the roughly 3 Bcf/d of existing pipeline capacity from Waha to the Mexico border is currently being used.

Rau said that about 18% of U.S. pipeline gas exports currently flow through West Texas and Arizona, while about three-fourths flow through East and South Texas.

Utilization will increase once gas starts flowing on the 886 MMcf/d final section of Fermaca’s Waha-to-Guadalajara, or Wahalajara pipeline system, which will bring Permian gas to Guadalajara, the industrial heart of Mexico’s central-western Bajío region.

The final section known as Villa de Reyes-Aguascalientes-Guadalajara was physically completed in late March, but has not begun flowing gas amid regulatory and other issues, with coronavirus lockdown measures slowing permitting in general.

“But what’s really going to help drive some upside here again is if we can get more capacity utilization from those existing pipelines, and there could be some positive movements on that front,” Rau said.

As noted in May by Gadex energy consultancy founder Eduardo Prud’homme, both CFE and Sistrangas national pipeline grid operator Cenagas are making progress on their capacity release mechanisms, which would benefit users on both sides of the U.S.-Mexico border.

During the same webinar, NGI’s Christopher Lenton, senior editor for Mexico and Latin America, highlighted that Mexico’s natural gas imports from the United States only fell by about 10% year/year in May, and have since begun to rise, citing data from Genscape Inc. Imports have surpassed 5.1 Bcf/d so far in June, Lenton said.

Rau said an important caveat to the forecast of strengthened Waha prices is that “if WTI prices rise back above $45-$50/bbl, and producers believe that price deck is sustainable, then associated gas production in the Permian likely would come roaring back, everything else being equal.”

He also highlighted that, due to Mexico’s dependence on gas imports from the United States, a majority of gas transactions in Mexico are linked either to Waha, Henry Hub or Houston Ship Channel prices.