Kinder Morgan Inc.’s (KMI) Northeast Energy Direct (NED) pipeline project has been a lightening rod for protest by New England pipeline skeptics since it was announced. Now, NED-minded New Hampshire lawmakers say more scrutiny is needed of the FERC process for approving such projects to ensure that the public is fully heard. 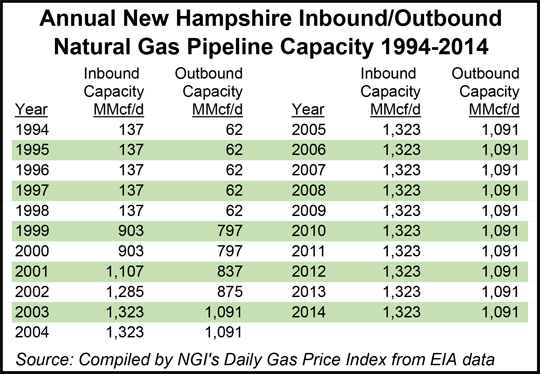 “Our constituents have expressed frustration about the lack of information from FERC [Federal Energy Regulatory Commission] and the limited extent that public input is considered in the Commission’s review and approval process for energy infrastructure projects,” Granite State senators and House members told U.S. Department of Energy Inspector General Gregory Friedman in a recently released July 15 letter.

The lawmakers are U.S. Reps. Ann McLane Kuster and Frank C Guinta; and Sens. Jeanne Shaheen and Kelly Ayotte. The same bipartisan quartet of legislators in a Monday letter invited FERC Chairman Norman Bay to their state “…to hear directly from citizens about this [NED] project.”

FERC authorization of a pipeline project, such as NED, confers the ability to exercise eminent domain to the developer, the lawmakers noted. “Moreover, the [certificate of public convenience and necessity] preempts any state or local action that may conflict with federal law in relation to a given project,” they said.

The lawmakers asked Friedman what FERC does to ensure that projects are in the public interest; that there is adequate stakeholder input; and that the agency meets performance measures. They also asked how comments from state/local agencies and officials are considered during the Commission process.

NED, which would extend KMI’s Tennessee Gas Pipeline (TGP) to deliver gas to the under-supplied Northeast, would pass through 17 towns in New Hampshire. The project has garnered a great deal of pushback from landowners and others in New Hampshire, Massachusetts and Maine (see Daily GPI, June 16; June 4; Jan. 23; Sept. 18, 2014). The NED docket at FERC has garnered numerous comments [PF14-22].

The project is in the pre-filing process at FERC. In-service could be in November 2018 assuming necessary approvals are granted.

No interstate pipeline capacity has been built into or out of New Hampshire since 2003, according to Energy Information Administration data. The state can take in and ship out 1.323 Bcf/d and 1.091 Bcf/d of pipeline-quality natural gas, respectively.