New Fortress Energy Inc. has announced plans to spin-off the majority of its midstream liquefied natural gas business (LNG) into a new joint venture with Apollo Global Management Inc. as it focuses on its own Fast LNG infrastructure. 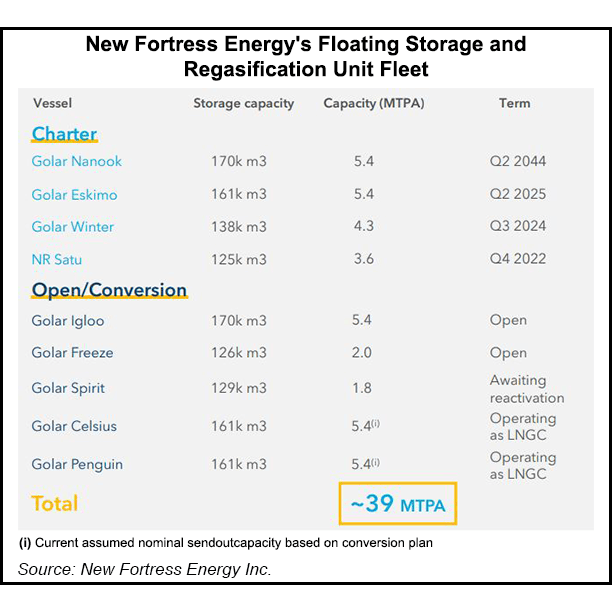 New York-based NFE disclosed its plans to sell 11 LNG assets to the new joint venture in a transaction valued at around $2 billion. The new company is 80% owned by Apollo and 20% is held by NFE. The transaction, which NFE reported could close sometime in the fall, would give the joint venture six floating storage and regasification units (FSRU), two LNG carriers and three floating storage units.

NFE disclosed it could receive an estimated $1.1 billion from the transaction. As a part of the deal, the company would also charter 10 of the 11 assets from the joint venture for 20 years as a part of its LNG supply operations.

“Together with Apollo, we are creating a leading LNG marine infrastructure platform to help accelerate the energy transition while freeing up capital to continue to invest into our Fast LNG and downstream LNG projects worldwide,” NFE CEO Wes Edens said.

NFE executives told investors in May the company plans to file applications this summer for another six floating liquefaction facilities in the Gulf of Mexico (GOM). NFE has filed two applications for its Fast LNG technology in the GOM and ultimately expects to have 11.2 million metric tons/year (mmty) of capacity built and deployed.

Fast LNG has been described by NFE as a way to deploy an LNG terminal more quickly and at lower cost than traditional floating LNG terminal technology, which uses larger trains on newbuild or converted vessels.

The transaction announcement also coincided with news about major partnerships on LNG and offshore exploration projects in Mexico.

Apollo, which has around $513 billion in assets currently under management, reported it participated in the partnership as a part of its sustainable investing initiative. Apollo’s Brad Fierstein, partner, said the new joint venture could further the firm’s environmental goals by building a strong platform for growing the introduction of natural gas in new power markets.

“This is a high-quality portfolio that increases energy security around the world, accelerates decarbonization efforts and facilitates LNG use, which is cleaner and more affordable than diesel,” Fierstein said.

NFE acquired most of its assets highlighted in the transaction just over a year and a half ago after acquiring Golar LNG Partners LP and Hygo Energy Transition Ltd. Since then, it has leveraged its new assets to expand its LNG distribution business and the leasing of its FSRUs to countries in need of regasification capacity.

Since Russia’s invasion of Ukraine in February, European countries especially have been on the hunt for available infrastructure to increase storage and regasification capabilities. In May, NFE told investors it is currently tracking 18 proposals for FSRUs globally.

The company currently holds seven FSRUs and has tagged two LNG vessels for conversion. Only three of those units would possibly be free for charter by the end of the year, according to the company.