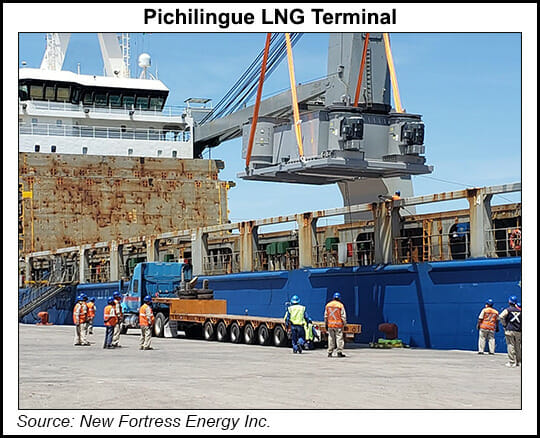 The small-scale terminal at the Port of Pichilingue in La Paz will have a processing capacity of 1.8 million gallons/day, and allow for cleaner power generation in BCS. The state lacks connectivity to natural gas pipelines in Mexico and the United States.

NFE has four LNG terminals operating in Jamaica, Puerto Rico and Brazil after going public in 2019. Another 2.4 million gallon/day import terminal and 300 MW gas-fired plant is also expected to come online in Nicaragua in the same timeframe.

NFE has other LNG terminals under development, including three in Brazil. Earlier this year, it acquired Golar LNG Partners LP and Hygo Energy Transition Ltd. in a deal valued at $5 billion.

CEO Wes Edens said during the firm’s first quarter 2021 earnings call that he expects commercial activity in Brazil to ramp up as the projects under development approach their respective in-service dates, explaining, “that’s effectively what happened to us in Mexico…”

On the energy transition front, NFE is partnering in a new company dedicated to producing hydrogen and renewable fuels as it aims to become a leading global provider of carbon-free energy.

“We now believe that the actionable opportunity lies in clean and renewable energy fuels,” Nicholson said during the call. “We plan to be in a position to reach a final investment decision on our first two projects by the end of this summer. One project that produces renewable diesel and jet fuel, the other that produces carbon-free hydrogen and ammonia.”

Management said NFE has partnered with FTAI to leverage the pipeline, railroad, storage and maritime infrastructure in addition to the investment firm’s financing capabilities. Zero Parks plans to invest up to $300 million in renewable fuels and $300 million in hydrogen projects. The first target would be blue hydrogen and ammonia, Edens said.

Blue hydrogen is extracted from fossil fuels, with emissions removed using carbon capture technology. There are no plans to pursue green hydrogen, which is manufactured using renewable energy.

“The green hydrogen businesses, in my opinion, today are not commercially viable,” Edens said. “I think that will change, and I think that there’s reason to be optimistic about that because I think governments are going to be very supportive of green hydrogen initiatives, and that’s great.”

For both of Zero Parks’ current projects, Nicholson said “the technology is well known and readily available, as is the feedstock. He added that, “we’re now focused on securing the offtake for the projects, which we expect to do in the coming months.”

“We think there’s going to be renewable fuel credits adopted in all probability by virtually every one of the states,” Edens said of U.S. opportunities. “And as a result, we’ll have a lot of places to distribute these fuels and actually make a good margin on them and do a good thing in terms of their carbon footprint.”

NFE’s decision to launch the entity comes after it formed an internal division last year to invest in emerging hydrogen technologies and to work toward net-zero carbon emissions by 2030.

Ultimately, the JV aims to spin off Zero Parks into a publicly traded company. For now, NFE’s core business remains introducing liquefied natural gas (LNG) in markets that lack access to the fuel for power generation and other needs.

Average daily LNG sales volumes increased in the first quarter to 1.4 million gallon/day, up from 750,000 gallon/day in the year-ago period.

NFE reported a first quarter net loss of $39.5 million (minus 21 cents/share), compared with a net loss of $60.1 million (minus 32 cents) in the year-ago quarter. The 1Q2021 loss was primarily attributed to higher LNG prices during the period and costs associated with the acquisition of Golar and Hygo.