New Fortress Energy LLC is said to be holding meetings with the Philippine Department of Energy (DOE) about possibly investing in an onshore liquefied natural gas (LNG) import terminal to be integrated with a gas-fired power plant. 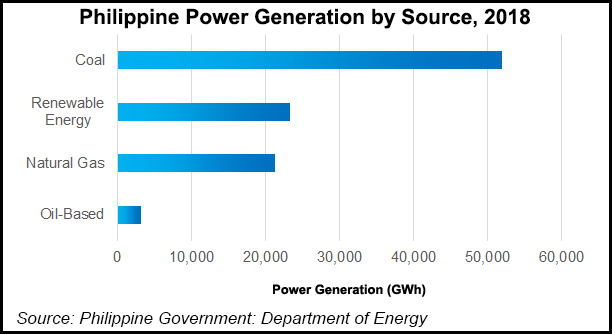 The company met on July 16 with DOE and Philippine National Oil Co. (PNOC) officials. The meeting served as an introduction with the company, allowing officials to learn more about the company and what it can bring to the table for the country’s LNG sector, DOE Senior Research Specialist Jessol Salvo told NGI.

Since last year, New Fortress has been pursuing gas projects in the United States, Mexico, Caribbean and Europe. In November, according to a filing with the U.S. Securities and Exchange Commission, the company was developing plans for two facilities to liquefy gas produced in the Marcellus Shale in Pennsylvania.

Last August, it also secured a long-term contract to build an LNG import hub on the southern tip of Mexico’s Baja California peninsula, a region isolated from the country’s main energy transmission systems. New Fortress said it had won a tender to develop, build and operate a $184 million facility in the port of Pichilingue in the state of Baja California Sur. And in June, it said it was developing plans to ship LNG throughout the Caribbean, Central Africa and West Africa.

New Fortress already operates a liquefaction facility near Miami, which came online in 2016 with the capacity to produce 100,000 gallons/d of LNG with storage capacity for 270,000 gallons.

The New York-based company is said to be bringing the same ambitions to the energy sector in the Philippines. It told the Philippine DOE that it can provide customized solutions for various LNG projects, including gas supply, conversion of existing plants into gas-fired assets in addition to the development of greenfield LNG power facilities, according to the Manila Bulletin. To proceed with its plans, New Fortress has to apply for a notice-to-proceed (NTP) clearance with the DOE, which it has not yet done.

Excelerate Energy LP based northeast of Houston has already applied for an NTP with the country’s DOE for a possible floating storage and regasification unit (FSRU) that is being evaluated. Excelerate has built FSRUs for use in North and South America, Europe, the Middle East and Asia.

New Fortress and Excelerate join a long list of companies and consortiums, both international and domestic, vying to build the Philippines’ first operational LNG receiving terminal. By the start of the year, the DOE had received four applications, including from Excelerate, to build an LNG facility in the country. Last month, PNOC reportedly signed a memorandum of understanding with Dubai-based firm Lloyds Energy for a targeted FSRU project also integrated with a power plant component.

Three groups, including a joint venture between Manila-based Phoenix Petroleum and state-owned China National Offshore Oil Corp., a tie-up between PNOC and domestic power producer First Gen Corp., along with Tokyo Gas, Japan’s largest gas utility, have been short-listed by the DOE.

The closest the Philippines has come to having an LNG terminal came in 2015 when Australia’s Energy World Corp. (EWC) said it was nearing completion on an import hub and LNG-fired combined-cycle gas turbine power station. The station in the Quezon province was to have a capacity of 650 MW and provide electricity through the wholesale electricity spot market for the Luzon grid.

Since then, however, EWC has pushed its deadline back amid reports of funding problems, regulatory obstacles and confusion over transmission arrangements. In late January, EWC received fresh DOE approval to build an LNG import and regasification terminal at its Quezon site, but by March the company’s plans were reportedly beset by delays again.

In previous years, a number of international oil and energy companies also expressed interest in the Philippines’ gas and LNG sector, but most have withdrawn amid allegations of regulatory uncertainty, governmental indecision, inefficiency and corruption.