A federal court has ruled that FERC has authority to regulate New Fortress Energy Inc.’s (NFE) small-scale liquefied natural gas (LNG) terminal in Puerto Rico, rejecting an argument that the Commission revised definitions of a pipeline to assert authority. 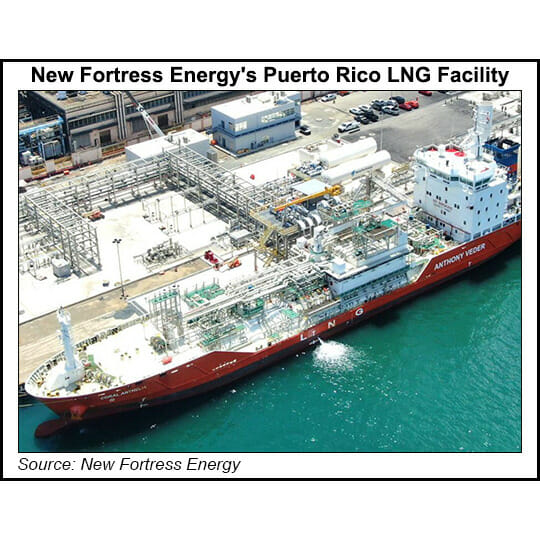 A panel of three judges with the U.S. Court of Appeals for the District of Columbia Circuit ruled Tuesday that the Federal Energy Regulatory Commission proved the LNG facility was built without required approval under the Natural Gas Act (NGA). FERC is the lead federal agency for approving LNG terminals, and it cooperates with state and federal agencies during the permitting process.

What Is A Pipeline?

In the opinion delivered by Circuit Judge David Tatel, NFE failed to argue its 75-foot pipe connecting the terminal to a power facility didn’t require the facility to seek approval from FERC (Docket No. 21-1122). Instead, Tatel said NFE focused on the specifics of the definition of a pipeline instead of refuting FERC’s history of case law.

“Can a 75-foot pipe be a pipeline?” Tatel asked in the opinion. “The Federal Energy Regulatory Commission thinks so. Because petitioner has given us no basis to question that judgment, we deny the petitions for review.”

The case began in 2020, when FERC ordered NFE to explain why it built the terminal without approval months after it was commissioned. The Commission noted in the order that it had previously approved similar facilities in Puerto Rico, an unincorporated U.S. territory.

CEO Wes Eden said NFE was motivated to bid on the Puerto Rico Electric Power Authority’s (PREPA) project to bring natural gas to San Juan after witnessing the damage from 2017’s Hurricane Maria. PREPA signed a five-year, $1.5 billion contract with NFE for gas supply and to convert two units at a power plant adjacent to the facility.

The facility also supplies LNG to industrial users and microgrids in Puerto Rico via trucks, which NFE argues made it exempt to FERC’s regulatory authority. In its argument, NFE refuted FERC’s claim that the connection between the terminal and the power plant was a “pipeline.” NFE argued that FERC had previously declined to regulate LNG facilities that transported imported gas to nearby industrial users.

Commissioner James Danly had sided with NFE in the case. Danly, the lone Republican-appointed commissioner, argued FERC inappropriately replaced guidance on pipelines with requirements that apply to “any type of piping.”

However, Tatel wrote “the Commission’s decision is perfectly consistent with its case law.” He said FERC had adequately proven that existing rules don’t apply to any standard definition of a pipeline, but whether the facility’s infrastructure sends and receives natural gas.

NFE dropped plans in March to build an LNG facility in Pennsylvania designed to tap into the Marcellus Shale for exports. The decision came after years of opposition from environmental groups.

NFE has also announced plans to file permitting applications for at least six floating liquefaction facilities in the Gulf of Mexico as part of plans to ramp up its Fast LNG technology. It has also been growing its assets in South America as it prepares to meet what the company expects to be a growing gap between LNG demand and supply into the next decade.