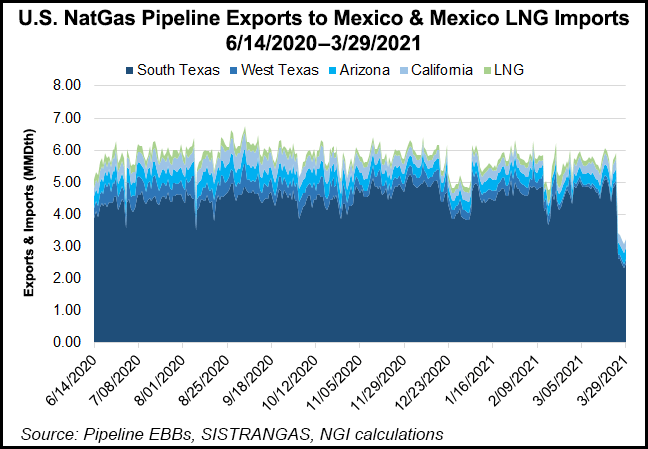 NFE will supply the equivalent of about 250,000-500,000 gallons (20,000-40,000 MMBtu)/d of liquefied natural gas (LNG) imported via NFE’s receiving and regasification terminal under construction in the port of Pichilingue.

The terminal is expected to be complete and begin supplying gas to CFE in May, said NFE.

The gas will be consumed by CFE’s CTG La Paz and CTG Baja California Sur open-cycle plants, which can be configured to run on diesel fuel or natural gas.

The NFE project also will include a 105 MW gas-fired power plant.

President Andrés Manuel López Obrador’s government has made it a goal to improve natural gas access in the Baja California and Yucatán peninsulas.

CFE’s general director, Manuel Bartlett Díaz, in February touted a plan to add 514 MW of natural gas-fired generation capacity in BCS, including a 327 MW combined-cycle plant due to enter service in 2024.

In March, CFE launched a tender for engineering, procurement and construction of six combined-cycle natural gas plants across the country, including the one in BCS.

The NFE agreement comes amid rising tensions between Mexico’s government and the private energy sector, punctuated by a recently passed law to give power plants owned by CFE priority in the dispatch order regardless of marginal generating costs.

Implementation of the law has been blocked for now as multiple lawsuits against it are considered by the courts.

Mexico relies mostly on pipeline imports from the United States to meet its natural gas needs, although Mexico’s LNG import terminals have played an important role in system balancing since Mexico has no underground storage capacity.

LNG exports from Mexico are on the horizon as well, amid growing appetite for LNG in Asia. U.S. developers are seeking to add liquefaction capacity on Mexico’s Pacific coast so that Asia-bound natural gas shipments from the United States can bypass the Panama Canal.

A $2 billion liquefaction project at the ECA terminal was sanctioned in late 2020, with equity stakes of 41.7% each held by Sempra LNG and Infraestructura Energética Nova, Sempra’s Mexico subsidiary. France’s Total SE holds the remaining 16.6% equity stake.