A U.S. firm has secured a long-term contract to build a liquefied natural gas (LNG) import project on the southern tip of Mexico’s Baja California peninsula, a region isolated from the country’s main energy transmission systems. 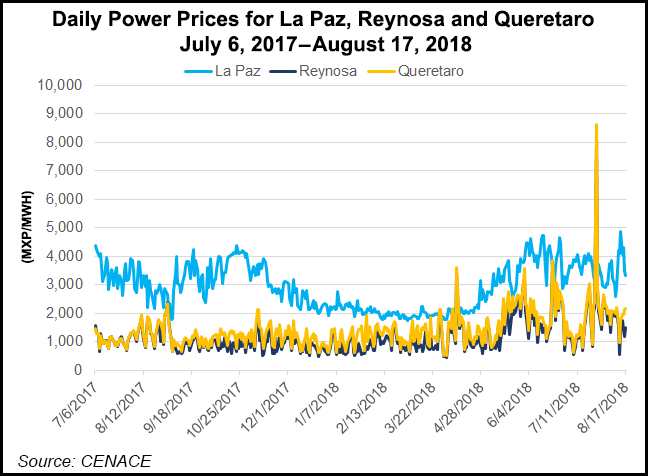 New Fortress Energy (NFE) won a tender to develop, build and operate the facility in the port of Pichilingue in the state of Baja California Sur, the company said Wednesday. The port’s administrator, Administracion Portuaria Integral de Baja California Sur, awarded the contract in July.

The project sponsors offered few details, but said the facility would entail a 3.5 billion-peso investment ($184 million) and could start up in 2020. Pichilingue is located just north of La Paz, the state capital.

The terminal could introduce a natural gas supply to Baja California Sur for the first time, allowing power plants in the region to use the molecule in lieu of fuel oil. The state, which encompasses the lower half of the peninsula, now lacks gas infrastructure.

The Baja California Sur power systems are also isolated from the national power grid on the mainland, as well as the Baja California system on the northern half of the peninsula, which is interconnected with San Diego Gas and Electric Co.’s network in Southern California.

Mexican state power utility Comision Federal de Electricidad (CFE) last year announced plans to tender an 810-mile transmission line, including a subsea section through the Sea of Cortez, which would connect Baja California Sur to the national grid. The Mexican Energy Ministry (Sener) expects that project to come in-service by 2023.

At an event to announce the Pichilingue contract, state governor Carlos Mendoza Davis reportedly highlighted the earlier start date for the LNG project versus the interconnection planned by CFE.

“This is a project that will expand the horizons for our development” as a state, the governor said.

Because of its isolation and lack of fuel alternatives, Baja California Sur has some of the highest electricity prices in Mexico. In the wholesale power market, day-ahead prices at the state’s La Paz node averaged 3,588 pesos/MWh in July, versus 1,933 pesos/MWh at the Queretaro node in central Mexico and 1,777 pesos/MWh at the Reynosa node on the northeast border with Texas, according to calculations by NGI’s Mexico GPI.

Most of the state’s generation plants are thermoelectric. It is also home to one of Mexico’s first utility-scale solar park, the 39 MW Aura Solar 1 plant near La Paz, a project whose development was spurred in part by the region’s elevated power prices.

Two separate power grids serve Baja California Sur. The smaller Mulege system cuts through the northern half of the state, while the main BCS system is on the peninsula’s southern tip.

The Pichilingue LNG project is adjacent to the BCS grid. The facility would also be sited about 650 miles south of the 1 Bcf/d Energia Costa Azul import terminal in the port of Ensenada, near the border with California.

Due to the gas production boom in the United States and growing LNG demand in Asia, Costa Azul is not used at its full potential as an import facility, although the terminal remains fully contracted and continues to supply gas to CFE’s Presidente Juarez combined-cycle plant in Rosarito.

The facility’s owners, the Mexico unit of Sempra Energy and Sempra LNG & Midstream, are looking to convert Costa Azul into a liquefaction facility to send gas exports to Pacific markets.

Mexico’s two active LNG terminals are the 700 MMcf/d Altamira on the Gulf Coast and the 500 MMcf/d Manzanillo on the Pacific. Altamira injected 309 MMcf/d in May, while Manzanillo supplied 500 MMcf/d.

Pichilingue would thus be Mexico’s fourth LNG import facility. Authorities have also announced plans to install a floating storage regasification unit (FSRU) in the port of Pajaritos in the southeast, along the Gulf Coast, although the project lost one of its two anchor customers earlier this year.

The new LNG projects at Pichilingue and Pajaritos would both serve areas with limited or no gas supply. Overall, Mexican demand for LNG is expected to diminish as pipeline infrastructure connected to the Permian Basin in Texas and other U.S. basins comes in-service later this year

Outside of Mexico, New Fortress has developed an LNG project in Jamaica to supply the 120 MW Bogue power station, via an FSRU charted from Golar LNG Ltd. It has also signed a contract with the Caribbean country’s power utility for another LNG project to fuel the planned 190 MW Old Harbour combined-cycle plant.