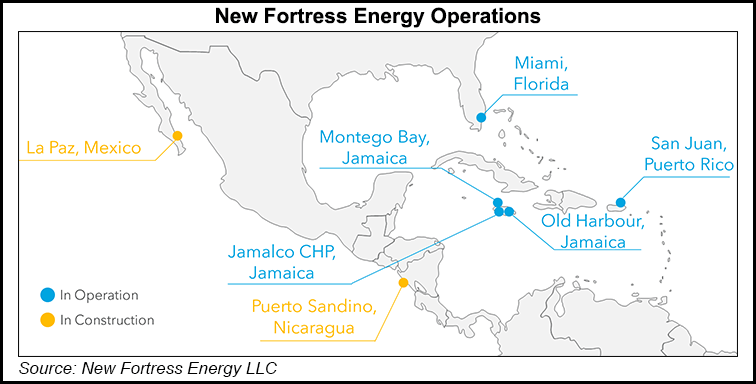 The company had expected to finish an onshore LNG import terminal and merchant power plant in Baja California Sur, Mexico, and a natural gas-fired power plant in Nicaragua by the end of this year. The Nicaragua project also would be supplied by an offshore storage and regasification terminal.

But the company said in its third quarter earnings results that it now expects those projects to be operational in 1Q2021, citing “minor delays” in permitting and construction. Third quarter gas volumes came in slightly below NFE’s guidance given that the company has delayed the initial ramp of volumes to the Nicaragua facility and cut its Mexican volume guidance for 2021.

Average daily LNG sales in the third quarter came in at 1.5 million gallons/day, up from 978,000 gallons/day in 2Q2020. NFE went public last year and has continued to transition into an operational company as it brings more projects online. Management said it expects LNG sales volumes to average 1.7-2.0 million gallons/day through the remainder of the year, unchanged from previous estimates.

The company operates or is developing small-scale LNG assets across the world, including import terminals, fuel management facilities, regasification infrastructure, gas-fired power plants and midstream facilities in the Caribbean, Europe, Latin America and the United States. The company said last week it has more than 15 million gallons/day of LNG volumes under discussion with potential customers.

Third quarter revenue increased to $137 million from $49.7 million in the year-ago period.

But the company reported a third quarter net loss of $37 million (minus 21 cents/share), compared to a net loss of $54.4 million (minus 30 cents) in the year-ago period. The 3Q2020 results were primarily driven by a $28 million loss on debt reduction and financing costs.

Earlier this year, NFE canceled eight cargoes it contracted to take from Centrica LNG Co. Ltd. in exchange for a $105 million payment. NFE said at the time that the cargoes were contracted at $7.00/MMBtu versus a spot market price of about $2.00. The decision, NFE said, has continued to help in narrowing losses this year.