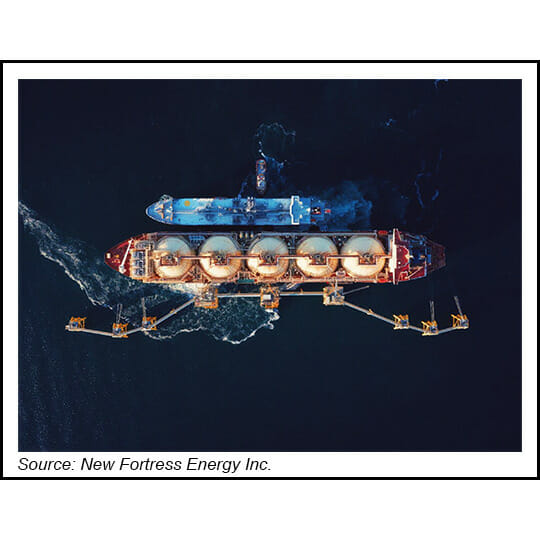 At Lakach, NFE and Pemex plan to jointly complete seven wells that Pemex has already drilled, Edens said. The idea is for most of the gas to be super-chilled and exported via a 1.4 million metric ton/year (mmty) floating liquefied natural gas (FLNG) unit that NFE plans to deploy to the site, along with an offshore gas processing plant.

The liquefaction capacity translates to about 184 MMcf/d. Remaining gas output from the wells would be sent to Mexico’s internal market.

“This is a model that I believe will have great relevance around the world,” Edens said, citing the dual benefits of supplying gas to the local markets of producing countries while also exporting it to the world.

A significant amount of the equipment needed for the project has already been purchased, “and our goal right now is to be in operation by the end of next year,” Edens said. He noted, “That’s an aggressive timeframe but one that we think is actionable.”

At the port of Altamira, meanwhile, NFE plans to deploy another two FLNG units, each with a capacity of 1.4 mmty as well, translating to another 368 MMcf/d of liquefaction capability.

Feed gas for these units would be sourced from Texas via the 2.6 Bcf/d Sur de Texas-Tuxpan offshore pipeline, for which CFE is the sole capacity holder.

NFE has not provided a timeline for when the Altamira projects are expected to enter service. In any event, the three liquefiers – one at Lakach and two at Altamira – would have a combined capacity of 4.2 mmty, or about 553 MMcf/d.

In addition to the LNG export projects, NFE and CFE reached a separate agreement through which NFE will expand and extend its natural gas supply commitments to Baja California Sur via the Pichilingue regasification terminal. NFE supplies gas from the terminal to CFE power plants in the remote peninsular region. NFE also has agreed to sell its own 135 MW gas-fired power plant there to CFE.

How Much LNG Capacity is Mexico Planning?

On Mexico’s Pacific Coast, meanwhile, San Diego, CA-based Sempra is aiming for the 3.25 mmty Energía Costa Azul Phase 1 liquefaction terminal to enter service by end-2024. Also on the Pacific side, Sempra is aiming to expedite development of the 3-4 mmty Vista Pacifico terminal, though a final investment decision has not yet been reached.

Other liquefaction projects in the works include Mexico Pacific Ltd. LLC’s project envisioned for Puerto Libertad, Sonora. That terminal’s first two trains would have a combined capacity of 9.4 mmty, according to the firm.

An additional terminal planned by CFE in Salina Cruz, Oaxaca, would have an initial capacity of 200 MMcf/d or 1.5 mmty, with the option to expand to 400 MMcf/d or 3 mmty, according to the government.

The projects planned by NFE, Sempra, MPL and CFE add up to at least 18.35 mmty or about 2.41 Bcf/d of liquefaction capacity. By comparison, the United States is currently exporting about 11.3 Bcf/d of LNG, according to NGI calculations.