A liquefied natural gas (LNG) facility planned in northeasteastern Pennsylvania, designed to tap into the Marcellus Shale, has for now been put on hold after the developer reached a settlement with environmental groups. 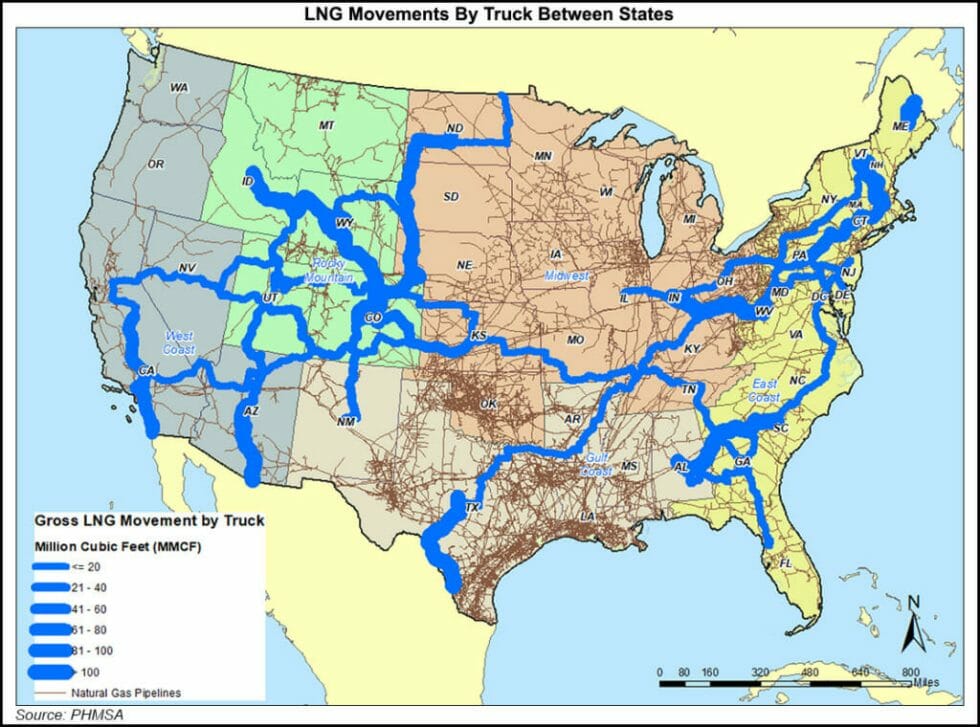 The settlement announced Monday by Pennsylvania-based environmental group PennFuture and other national organizations outlines plans for the facility’s developer to allow its current air permit to expire in July. In exchange, the activist groups agreed to drop permit challenges.

An affiliate of New Fortress Energy Inc. (NFE) has been actively pursuing the plans since at least 2018, when it made its first presentations to Wyalusing Township officials in Bradford County, PA. The project was granted a permit by Pennsylvania environmental regulators in 2019.

Since then, the project developers have applied for two extensions for the facility’s air permit. They have also filed with FERC seeking to clarify whether the plant is subject to the Commission’s authority.

Environmental groups have been arguing in appeals against the second extension for the air permit granted by Pennsylvania regulators, indicating it did not go far enough to protect the environment. Under the agreement, the project developer would have to secure a new air permit in order to begin construction activities.

PennFuture CEO Jacquelyn Bonomo called the settlement a victory “for the local community and all Pennsylvanians.” The Sierra Club, which has also supported the permit battle, continues to oppose both unconventional gas production and LNG export projects.

In the wake of the Russian invasion of Ukraine, advocacy groups for Appalachia’s natural gas industry have been working to highlight how the region’s resources could be leveraged in Europe’s time of need.

The Marcellus Shale Coalition (MSC), a collection of midstream and supply chain partners in the Appalachian Basin, has been vocal about the potential for Appalachian LNG exports to prevent energy-starved nations from endangering their climate goals with coal-switching for electric generation.

In response to the settlement, MSC President David Callahan told NGI that access to “the world’s cleanest and most responsibly produced” energy had again been hindered by unnecessary opposition.

“The worldwide need for U.S. natural gas exports has never been more critical,” Callahan said. “The action of activists opposed to natural gas development effectively blocked work on this worthy and necessary project that would benefit local workers, consumers and the environment.”

In an update to the Department of Energy (DOE) in October, the NFE affiliate said the plant could have an operational date sometime in 2022 pending a decision by the Federal Energy Regulatory Commission on its jurisdiction.

The small-scale facility was intended to chill gas produced in the Marcellus for shipment by truck or rail to an export terminal NFE has proposed in New Jersey on the Delaware River. In the October filing to DOE, the company said a start-up to the Gibbstown Logistics Center in New Jersey would have a similar timeline to operating the Wyalusing Township plant.

According to initial filings with the U.S. Securities and Exchange Commission to take NFE public, development in Bradford County could have potentially included two liquefaction facilities capable of producing 3-4 million gallons/day of LNG. The company also said it had already entered into a 15-year supply contract for feed gas, with pricing that is “generally fixed” at $2.50/MMBtu.

NFE management previously said a focus on smaller, more efficient facilities would allow it to distribute LNG volumes faster and cheaper than the typical projects being developed across the industry.

NFE now operates a liquefaction facility near Miami. The Florida plant came online in 2016 with the capacity to produce 100,000 gallons/day, with 270,000 gallons of storage capacity. The company, which provides LNG and power services to underserved markets, also has projects under development or in operation in Asia, the Caribbean, Europe and Latin America.