FERC in its monthly meeting Tuesday failed to pass three draft orders for Mountain Valley Pipeline LLC (MVP), a move that could augur poorly for the developer’s expectations to quickly complete construction amid the transition to Democratic leadership at the agency. 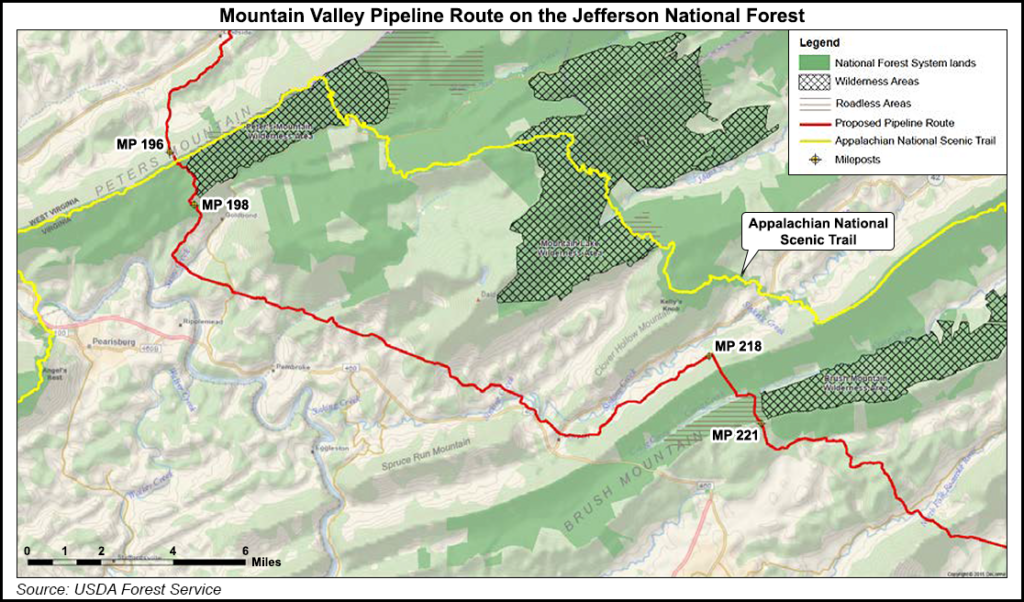 In recent months, MVP has sought the Federal Energy Regulatory Commission’s blessing to continue expanding construction efforts, including seeking the elimination of an exclusion zone around the Jefferson National Forest and altering its waterbody-crossing methods to allow for more work on the first 77 miles of the project.

While three separate MVP-related items appeared on the agenda for this month’s FERC meeting that could have advanced these efforts, none of them garnered a majority vote, as both Democratic Commissioners Richard Glick and Allison Clements voted no. Recently-installed Republican Commissioner Mark Christie did not participate.

The U.S. Forest Service finalized an updated review of MVP in December, and the developer late last week provided FERC with a copy of a right-of-way granted by the Bureau of Land Management (BLM) that would ostensibly allow for construction through the national forest lands protected by the exclusion zone.

However, comments Tuesday from Glick and Clements suggest this might not be enough to persuade the now Democratic-led FERC to authorize further construction activities for MVP.

After a number of legal setbacks in recent years, the pipeline has made significant progress in obtaining new or reissued federal permits required under its FERC certificate. However, updated Nationwide Permit 12 (NWP 12) waterbody crossing permitting granted by the U.S. Army Corps of Engineers was stayed by the U.S. Court of Appeals for the Fourth Circuit in November.

This leaves the project short of the requirements under Environmental Condition 9 of its certificate and thus should preclude any construction activities as long as any permits remain outstanding, Glick argued.

In November, MVP filed with FERC to amend its certificate to allow the use of conventional bores to cross waterbodies and wetlands between mileposts 0 and 77, instead of the open-cut method originally authorized by the commission.

However, Glick said MVP “still hasn’t filed for approval of its plan for the remaining several hundred miles of the project. That leaves us in a situation where the developer still doesn’t have all the permits it needs to proceed with the project.”

The conditions laid out in MVP’s certificate require “that we insist on a resolution on the water crossing before construction resumes,” he said.

Clements voiced her agreement with Glick’s concerns over allowing pipelines to proceed with construction absent all requisite permits. She alluded to the issues surrounding MVP’s construction and permitting setbacks as “an excellent replication, unfortunately,” of the need to reform FERC’s natural gas pipeline certification process.

Analysts at ClearView Energy Partners LLC told clients following the meeting that the BLM permitting “would normally clear the way for construction resuming” near the Jefferson National Forest.

“As we understand it, there are no NWP 12 crossings within the footprint of the pipeline’s route” through the national forest, the analysts said. “Nevertheless, it appears that both Commissioners Glick and Clements are disinclined to allow any additional notices to proceed with construction while the NWP 12 remains outstanding.

“However, it would appear that while” Glick as FERC chairman “could prevent movement on pending dockets,” the two serving Democrats “would need a third vote to rescind current construction authorizations. To that extent, Commissioner Christie’s yet-to-be-known views on these dockets appears pivotal.”