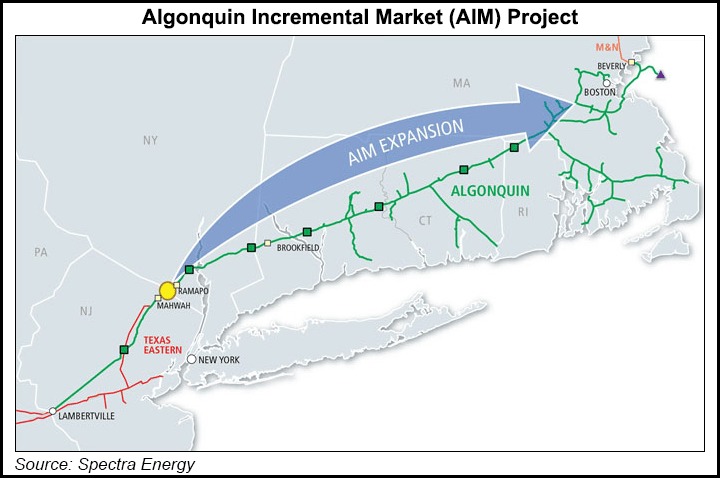 In a letter Friday to the Federal Energy Regulatory Commission (FERC), New England States Committee on Electricity (NESCOE) Executive Director Heather Hunt said NESCOE agreed with the position of the Connecticut Department of Energy & Environmental Protection (DEEP), which had asked for a modified National Environmental Policy Act (NEPA) review of the project.

Specifically, DEEP had submitted comments that Spectra Energy Corp., Algonquin’s parent, had originally planned for the AIM Project (Docket No. PF13-16) to provide 500,000 Dth/d of gas transportation capacity into New England (see Daily GPI, Oct. 15). The project was scaled back after Spectra held an open season, but DEEP said they were concerned that another pipeline project would be needed in a few years, regardless.

“In addition to review of the AIM Project at its proposed project size, consistent with DEEP’s request, the commission should undertake a concurrent analysis that assumes a materially larger project,” Hunt said, adding that NESCOE “understands that Spectra disagrees with such an approach, stating in response to DEEP’s request that FERC’s review should ‘not include an analysis of speculative future Algonquin projects.’

“While [we appreciate] Spectra’s desire to limit the scope of NEPA analysis, this requested modification would not displace the review sought by Spectra. Rather, it would add to this analysis through a complementary, parallel study. Such an enhanced study is timely and efficient, taking into account potential solutions to an increasing dependence on natural gas-fired generation and regional state collaboration specific to the development of natural gas pipeline.”

The AIM Project, in its current form, would provide an additional 342,000 Dth/d of gas from the Marcellus and Utica shales to New York, Connecticut, Rhode Island and Massachusetts (see Shale Daily, Oct. 25).

About 78% of the pipeline infrastructure for the project will replace existing pipelines, while the remainder will consist of new pipeline loops and one lateral.