Gas buyers faced with the extended Thursday-through-Monday holiday period were generally treated to a plate of lower prices. Overall, weakness in the Gulf and Midcontinent was greater than hefty $1 plus gains in New England, and the overall decline was a penny to average $2.53. 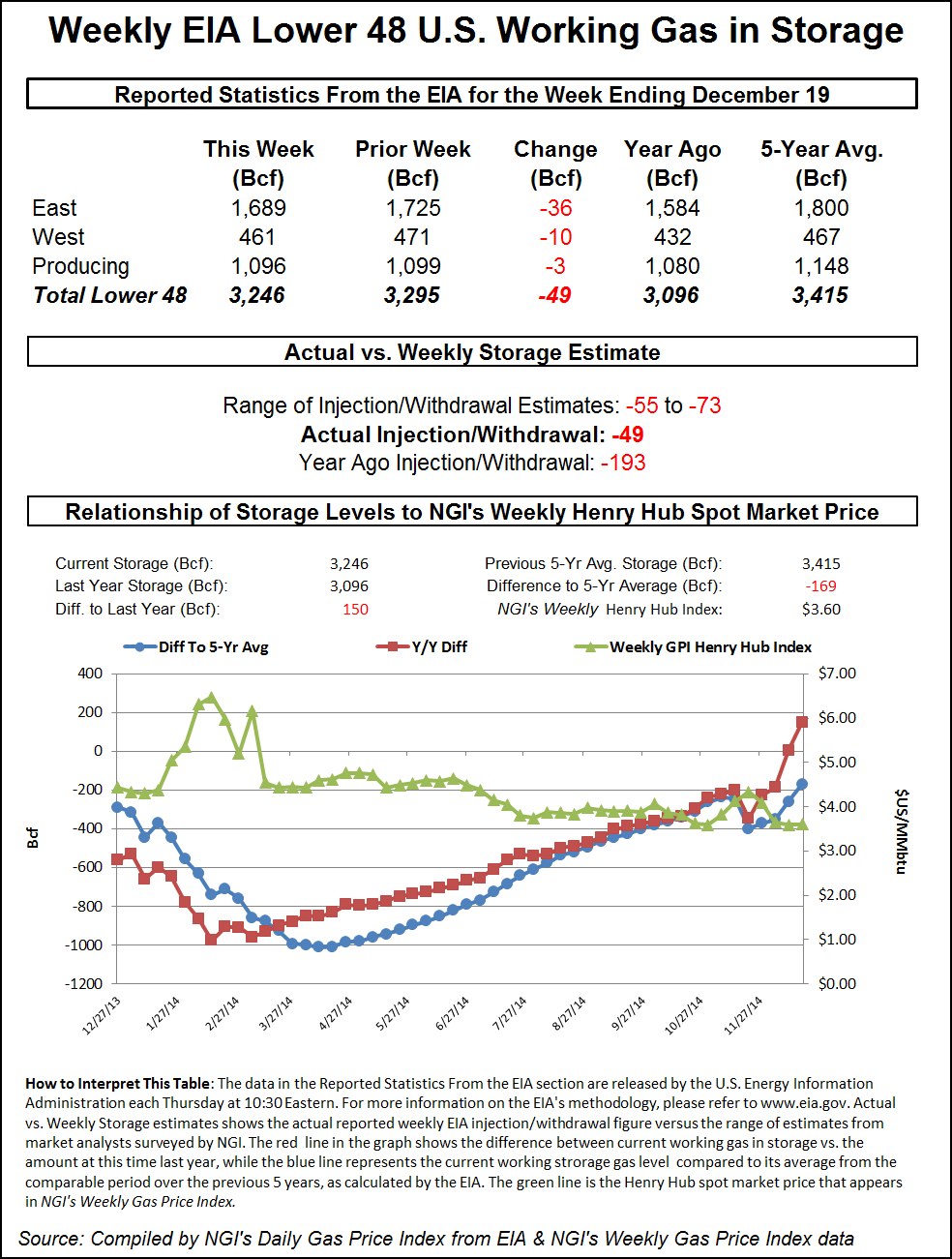 Weather forecasts called for initial moderate temperatures throughout major population centers, but temperatures were forecast to steadily decline throughout the five-day period. The Energy Information Administration (EIA) in a pre-holiday release of its weekly storage report showed a withdrawal that was significantly less than what the market was expecting, and futures cartwheeled lower. At the close, January had fallen 14.1 cents to $3.030 and February was lower by 13.2 cents to $3.072. February crude oil continued its losing ways, dropping $1.28 to $55.84/bbl.

Prices in New England posted solid gains as weather forecasts, although initially projecting moderate temperatures, showed those temps working lower throughout the period. Forecaster Wunderground.com said Boston’s Wednesday high of 50 was expected to reach 56 Thursday, but the high on Monday was expected to be a much chillier 36, 3 degrees below normal. New York City’s 60 high on Wednesday was seen easing to 54 Thursday, but by Monday the forecast high was 40, 1 degree below normal. Philadelphia’s Wednesday high of 60 was predicted to slide to 51 Thursday before reaching 49 Monday.

The Midwest and nation’s mid-section were also seen enduring a similar temperature pattern. Wunderground.com forecast that Chicago’s Wednesday high of 43 would ease to 40 on Thursday before dropping to 33 on Monday, the seasonal norm. Omaha, NE’s 37 high Wednesday was seen reaching 46 Thursday, but by Monday the expected high was predicted at 20, 13 degrees below normal.

Northeast weather patterns were expected to be turbulent. “Following a wet, mild Christmas Eve across much of the Northeast, a windy and chillier Christmas Day is on the way,” said Brian Thompson, an AccuWeather.com meteorologist.

“Christmas morning, though, will still be very mild along the I-95 corridor, where temperatures in Boston, New York, Philadelphia and Washington will be near 60. Temperatures will then fall into the 40s during the afternoon. Across the interior Northeast, temperatures will go from near or above 50 on Wednesday to the 30s for much of Christmas Day.

“Even though temperatures will fall Christmas Day, the wind will be the big story throughout the Northeast, with gusts over 40 mph. According to AccuWeather Senior Meteorologist Carl Babinski, “The strongest wind gusts will be across upstate New York and northern New England, closer to the departing storm system in eastern Canada.”

Prior to the release of EIA storage figures, January futures were trading about $3.07, but that all changed once the number came out. Futures tumbled following the release of storage data showing a lower withdrawal than what the market was expecting.

“This was a clearly bearish report, with the 49 Bcf net withdrawal well below the consensus expectation,” Evans said. “The report doesn’t provide specifics on changes in supply or demand, but with the population-weighted degree days very similar to the prior week, we’d guess this implies a step up in natural gas production, with bearish implications for the weeks and months ahead.”

Inventories now stand at 3,246 Bcf and are 150 Bcf greater than last year and 169 Bcf below the five-year average. In the East Region, 36 Bcf was withdrawn, and the West Region saw inventories decrease 10 Bcf. Stocks in the Producing Region fell by 3 Bcf.

Forecasts overnight turned slightly cooler. WSI Corp. in its Wednesday morning six- to 10-day outlook said, “[Wednesday’s] forecast is generally colder than the previous forecast across the majority of the nation due in part to the day shift. Forecast confidence is average as there remains good model agreement and consistency that a colder pattern will emerge. However, there are still usual technical and timing differences. There may remain a slight downside risk across a good portion of the nation, except for California.”

The below-normal temperatures are far from the bone-rattling cold of last year’s polar vortex. According to WSI, in one week the three-day highs in Chicago are forecast at 19, 18 and 22, a little more than 10 degrees off the normal high of 32. Detroit is expected to see highs of 21, 24 and 21. The seasonal high in Detroit is 33.

Analysts see a weather-driven continuation of the contraction in the year-on-five-year storage deficit. Jim Ritterbusch of Ritterbusch and Associates in closing comments Tuesday said, “this week’s [temperature] trends have proven much milder than forecasts of just a week or so ago. For instance, Chicago is likely to see 50 degree temperatures [Tuesday] while major East Coast areas could see temps as high as 60 degrees later this week. As a result, tomorrow’s major contraction in the supply deficit against average levels is apt to be followed by another sharply downsized withdrawal next week.

“Given these weather views, the contraction in the year-over-year shortfall of more than 200 Bcf could be seen across this month. Meanwhile, production is also being accommodated by the mild weather trends. At the end of the day, expectations for an erasure of the storage deficit against normal levels is still being pushed forward during the upcoming quarter, with supplies widely viewed as ample to meet the needs of an even colder than usual January-February.

“Looking ahead to [Wednesday’s] trade, we won’t rule out a ‘three-peat’ in which a seemingly bullish storage withdrawal, such as a decline of more than 75 Bcf, could easily be followed again by a significant selloff that could carry to the 3.05 level. And unless temperature views shift back to the cool side, a $2 price handle is not off the table by early next week given an exceptionally weak physical trade that saw Henry Hub drop to as low as $2.90 [Tuesday].”