Editor’s Note: In this five-part series, NGI is taking an in-depth review of natural gas utility rates across the country and how – and why – they have escalated since 2021. Part 1 delves into the escalating consumer costs in New York and New England. Part 2 focuses on how natural gas rates on the West Coast have risen and what utilities and governments are doing as a result, and Part 3 looks at the costs consumers will be paying in the Southeast and Florida, which takes into account the fallout from Hurricane Ian. Part 4 goes on a trip to the Appalachian Basin to see how rates there are responding to winter fears, while Part 5 takes a dive into what consumers can expect in the coming months in the Midcontinent. 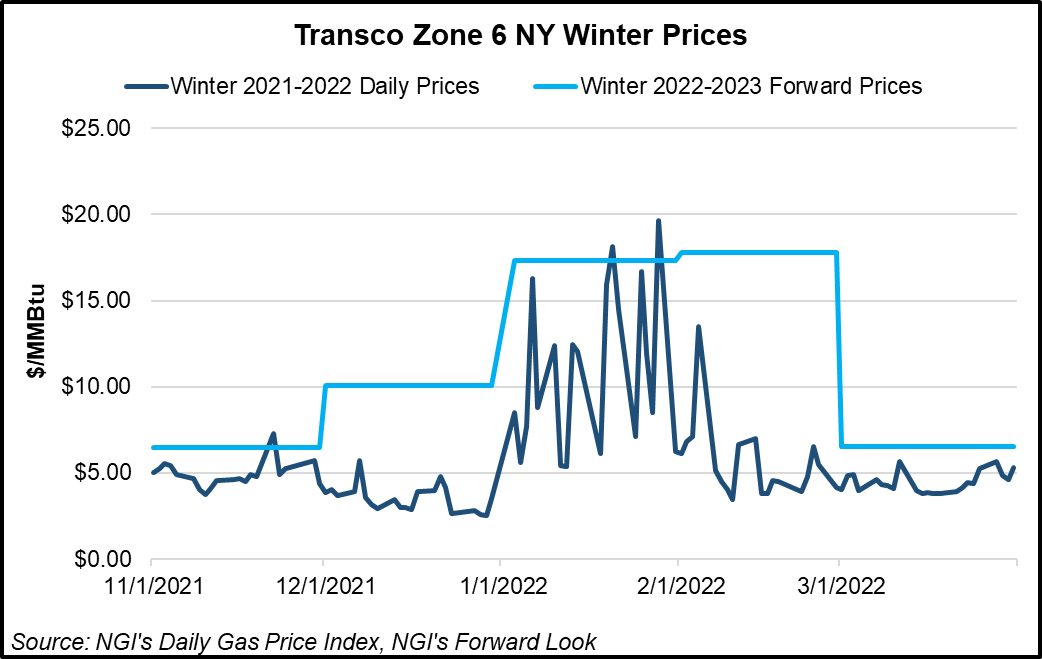 A myriad of factors is contributing to a sharp rise in natural gas rates heading into the winter, as U.S. consumers face price hikes of as much as 38% compared with last year in some parts of the country.

For instance, the New York Independent Systems Operator (NYISO) in September warned “of a sharp rise in wholesale electric costs” as a result of inflation and ongoing economic factors from the pandemic, amplified by Russia’s invasion of Ukraine.

In a recent white paper, NYISO cited July data from the Bureau of Labor Statistics that the Consumer Price Index was up 8.5% year/year, one percentage point higher from the start of the year alone. In January, prior to the Russia-Ukraine conflict, natural gas prices already were up 279% year/year.

For natural gas, National Grid said residential customers who use an average of 713 therms during the winter heating season (Nov. 1-March 30) could expect to pay about $263 more than last winter. The utility noted that about 87% of the forecast rise, or $231, is a result of higher wholesale natural gas prices. The remaining 13% can be attributed to higher delivery prices approved in the company’s multi-year rate program, as well as other bill surcharges.

National Grid’s residential electricity customers in eastern New York could expect to pay about 22% more this winter. Of the $116 forecasted surge, higher wholesale electricity prices are contributing $105 of the increase, the utility said. The prediction is based on average electricity use of 600 kWh/month.

Central New Yorkers served by National Grid are likely to see a different story. Residential electricity customers using an average 600 kWh/month could see their winter bill rise by about 5%, a difference of $22 for the whole season. National Grid said half of the jump could be attributed to higher supply prices, with regulatory-approved rate changes and other surcharges contributing to a higher bill.

Of the $112 hike in customer heating bills, ConEd said supply costs account for $90 of the jump. Delivery charges are expected to comprise the remaining $22 year/year increase.

Electricity customers in ConEd’s territory also are expected to see higher bills this winter, though to a lesser degree than natural gas consumers. Higher prices on natural gas, which fuel much of the generation plants in the Greater New York City region, could result in a 22% year/year increase for New York City residential customers using about 300 kWh/month. Westchester residents using about 600 kWh/month could see a 27% increase on their bills, ConEd said.

New England, relative to the rest of the United States, is facing more direct price fallout related to the Russia-Ukraine conflict. The region, lacking the infrastructure to directly pull in gas from the Lower 48, largely depends on LNG imports, according to natural gas and electric utility Unitil Corp.

At a Concord, MA, Chamber of Commerce forum in mid-September, Unitil media relations manager Alec O’Meara said as the region phases out coal and oil, New England is “using more and more natural gas to a point where natural gas is something like 50-53% of our total fuel mix. In the wintertime, that does create a little bit of a bottleneck because we are also heating with natural gas in the winter and there’s only so much capacity that can come into New England based on existing infrastructure.”

O’Meara told the audience that on peak winter days, about 35% of New England’s natural gas is supplied via liquefied natural gas cargoes. The worsening energy crisis in Europe, however, has led to higher costs this year.

“The conflict has put New England in direct competition with Europe,” Unitil said.

For Unitil’s customers, the utility has filed with New Hampshire and Massachusetts regulatory agencies to bid on electricity supply rates for an eight-month period, as opposed to the typical six-month period, in an attempt to keep rates lower.

Spot Prices ‘Higher Than They’ve Ever Been’

“Hub analyses show…areas’ price increases were impacted by infrastructure constraints…Marcellus and Utica supplies were produced, but couldn’t actually move,” Meyer said. In New England, “Infrastructure base is critical…Simply put, we’re running into the ceiling …This may be true in other parts of the country too.”

New England’s gas situation is “unique,” Meyer said. Between limited pipeline capacity, and natural gas demand for residential heating and the region’s grid, New England “is going to face some additional challenges, and this is because some of the supplies are imports, but that’s not unique to this year alone. What’s unique is the spot prices…”

Prices were “higher than they’ve ever been,” Meyer said at the time of the event.

In mid-September, forward prices at the Algonquian Citygate, the benchmark for New England gas, stood at $35.286/MMBtu for January 2023, according to NGI’s Forward Historical Data.

The high prices were “all stemming from a lack of ability to build new infrastructure and ship natural gas from one port to another,” Meyer said.

Basis prices represent the difference in price between a particular location and the U.S. benchmark Henry Hub.

This summer’s temperatures were “20.3% warmer than the 30-year normal,” according to AGA’s mid-September Natural Gas Market Indicators report. That has pushed prices higher. In addition, Eversource Energy, which serves New England, has warned customers of higher bills because of “soaring global demand and constraints on domestic supply.”

If all the proposed adjustments are approved by the DPU, an average Eversource residential customer in Massachusetts in the former NSTAR Gas service territory would see an increase of roughly 38% year/year, or a hike of $86/month. Customers in the former Columbia Gas of Massachusetts territory would see an increase of about 25% this year, or $61/month more compared with last winter.