Spot natural gas for Friday delivery continued to work lower in Thursday’s trading as the market was pressured by myriad forces. New England recorded the biggest drops as a warming trend was expected to bring Boston to above normal temperatures by the weekend, and the West Coast softened as the Pacific Northwest hydro situation improved. 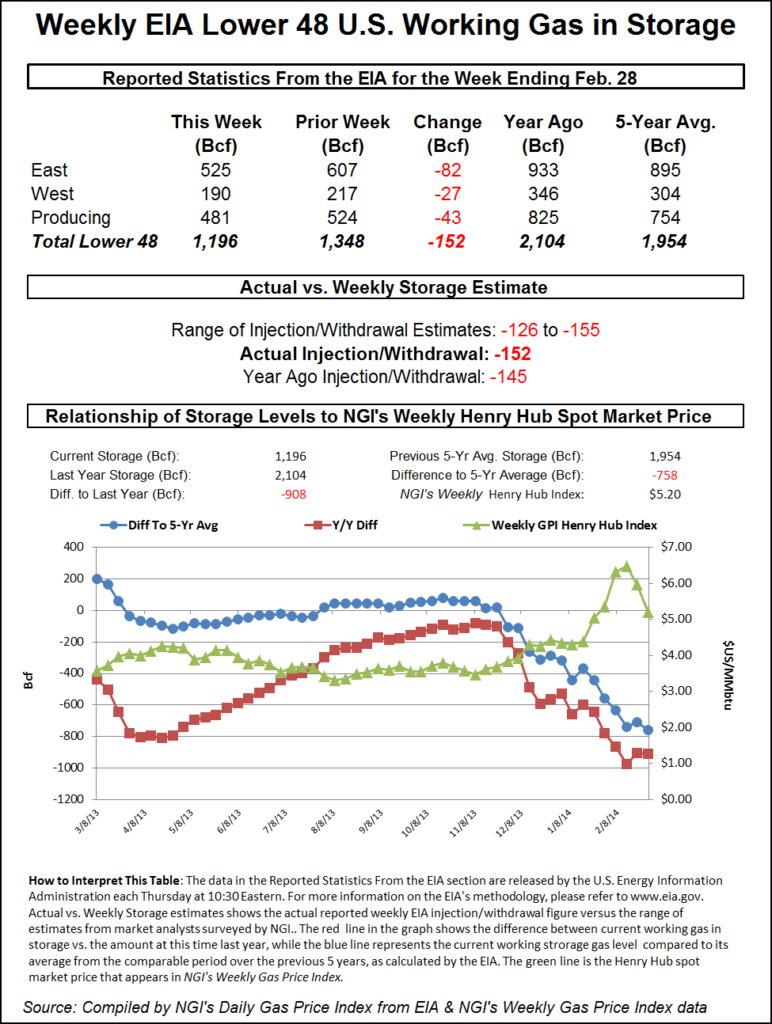 Many locations fell as prices sought closer parity to the screen. The Energy Information Administration (EIA) reported a withdrawal from inventories of 152 Bcf, which was greater than what traders were expecting. The market rose, but stayed within recent trading parameters. At the close, April had added 13.9 cents to $4.662 and May was up by 11.9 cents to $4.603. April crude oil gained 11 cents to $101.56/bbl.

Double-digit dollar declines were seen at New England points as forecasts called for an abrupt warming trend. AccuWeather.com predicted that Thursday’s high of 26 degrees in Boston would climb to 38 Friday before reaching 44 Saturday. The seasonal high in Boston for early March is 43. New York City’s 30 degree high Thursday was expected to make it to 40 on Friday before rising to 51 on Saturday. The normal high for New York City is 46. Washington, DC’s 34 high Thursday was predicted to reach 40 on Friday and 55 by Saturday. The seasonal high in the nation’s capital is 52.

Folks in Washington were expected to enjoy some welcome relief. After posting a low of 14 on Tuesday, temperatures were expected to rebound nicely. “After a little setback with some sneaky cold air into Thursday, temperatures will rebound Friday into the weekend around Washington, DC,” said AccuWeather.com meteorologist Alex Sosnowski. “Highs are forecast to be in the 30s on Thursday and then in the 40s on Friday, [and] temperatures are forecast to reach near 60 F on Saturday…

“A Southern storm system will be monitored for possible rain and wet snow along the lower mid-Atlantic coast late Thursday into Friday morning. However, the odds are against the storm from bringing accumulating snow locally. Temperatures are projected to slip back below normal next week, [and] another storm will have to be watched for possible adverse conditions late next week.”

Traders saw much of the day’s decline as the result of cash market quotes converging with April futures. “How in the heck can you have a $3 spread cash versus next month?” queried Jeff Richter, president of Energy GPS, a Portland, OR-based consulting firm. “There is a storage deficit, I get that, but it’s a question of what’s going to give, and I think what you see is all it takes is one region to not have the cold solidify, which may be Texas or the West.

“The Northeast and Central U.S. were cold, and Texas was cold to begin with, but that has come back and warmed up a bit, and I think that is the driver of not as much spark at the Hub. In the West you add to it the amount of hydro that we are getting so the Pacific Northwest doesn’t need any gas. We have gone from 650,000 MMBtu on a daily basis for power burn and now we are down to 135,000.”

Futures traders thought the market would have registered a more bullish response to the 152 Bcf inventory draw. “We still have a 20-cent range from $4.50 to $4.70 and you think it would have popped a little more with that kind of number,” said a New York floor trader. “I was surprised we weren’t higher than we were. I think if we get above $4.75 to $4.76 we will get some fresh buying, maybe squeeze out a few shorts and run to $4.90 to $4.95.”

As analysts debate the level of season-ending inventories, which are likely to be the lowest since 2003, Thursday’s release of weekly storage data took on its usual role of the day’s primary price driver. At present, storage stands at 1,196 Bcf, and some are forecasting an end-of-March level of less than 900 Bcf.

The next four weeks are likely to be interesting indeed. Energy Metro Desk in its weekly survey sees “the next four weeks of reasonably highish draws, with next week’s report possibly over -200 Bcf. Wow. As for this week, we note that the Survey Index came in at 137 Bcf and the relative range this week was neither high or low at -126 to -155,” said editor John Sodergreen. “Under traditional measures, the spread between the three categories we track was only 2.8 Bcf and thus no surprise is suggested. However, using our new methodology, the spread jumps to 3.4 Bcf and thus a surprise indeed.”

In its Thursday morning forecast, Commodity Weather Group focused on the likelihood of another winter storm hitting the East. “Overall forecast changes are mixed as we see some colder short-range changes in the Northeast, warmer Midwest to East early next week, and then some briefly colder adjustments behind a winter storm late next week,” said Matt Rogers, president of the firm. “That winter storm is probably the big forecast wildcard right now as the modeling continues to vacillate on what it is seeing for that event.

“The trend with storms recently has been to shift south and east, so this could end up being a late-season winter storm for the eastern Midwest, Northeast and maybe even the Mid-Atlantic (late next Wednesday into Thursday or Friday). A Western ridge spike delivers a potent cold shot behind that storm, but then we see signs of another Eastern transient warm-up as the West shifts colder late in the 11-15 day with a possible Alaskan ridge inspired stronger cold event.”

From a technical standpoint, it’s time for the bulls to perform. Brian LaRose of United ICAP said, if a “minor ABC bear market correction [is]complete. That is what a break down below $4.441 will indicate.