With crude oil production and natural gas flaring on a record-setting pace in the Bakken Shale, North Dakota and industry officials welcomed a new gas pipeline link, but pipelines are only part of the problem. 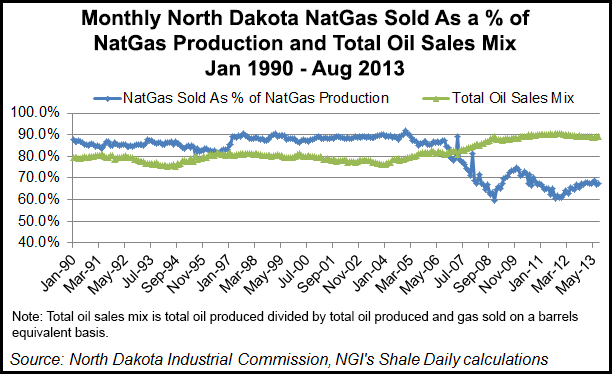 Officials continue to emphasize that more infrastructure is needed to cut into the state’s nagging problem of large volumes (29% most recently) of flared gas.

That is why state Pipeline Authority Director Justin Kringstad qualified his praise for the opening of the 80-mile, 12-inch diameter Alliance Pipeline last Tuesday (see Shale Daily, Oct. 29). Kringstad told NGI‘s Shale Daily he is still anxiously anticipating the completion of a major expansion to the Hess Corp. Tioga gas processing plant, which connects to the new lateral.

Right now, the expanded plant is expected to be online before the end of this year, and at the latest early in the first quarter, Kringstad said.

“There are three items that need to line up for flaring to be reduced,” Kringstad said. “More gathering pipelines need to be built, along with more processing plants and transmission pipelines. Alliance will play an important role in solving the third piece of the challenge.”

As part of the larger 2,300-mile Alliance integrated Canadian and U.S. gas transmission pipeline system, the new pipeline lateral in North Dakota runs from the existing Hess processing plant near Tioga tying into the larger Alliance mainline system near Sherwood, ND. Hess is the anchor shipper on the new lateral.

“Projects like this are crucial as North Dakota continues to mature and develop its gas infrastructure,” Kringstad said.

The lateral is designed to move up to 126 MMcf/d of rich natural gas, which includes various natural gas liquids (ethane, propane, butane and pentane) in the transmission stream. The $170 million Alliance addition took a year to construct.

The new lateral can help soak up some of the increased gas supplies produced in association with the Bakken’s very globally desirable light sweet crude oil, North Dakota Gov. Jack Dalrymple said at the ceremonies officially opening the new gas and NGL link.

Dalrymple called the new line “state-of-the-art,” and an added source of help in reducing flaring, but he also stressed the he was “looking forward to moving more of the state’s rich natural gas to market.”

The governor and industry executives see the added infrastructure as giving producers more ways to get their gas and NGLs to market in the greater Chicago area.

Additional natural gas pipeline capacity would help alleviate the flaring issue in the Bakken, but it most likely would not turn 100% of natural gas production into sales. The highest percentage of natural gas sales to gas production on record in North Dakota since 1990 was 92% in December 2004. If history is a guide, the state would still experience some degree of production loss even with increased takeaway capacity.

The recent focus on Bakken oil production and increase natural gas flaring has also pushed the mix of oil sales to combined oil and gas sales in North Dakota from about 80% in 1990 to approximately 90% this year.