The natural gas market is starting to feel downright bullish, if only because some of the bearish factors weighing down prices the last few years are starting to normalize, according to Macquarie Capital (USA) Global Oil & Gas Strategist Vikas Dwivedi. 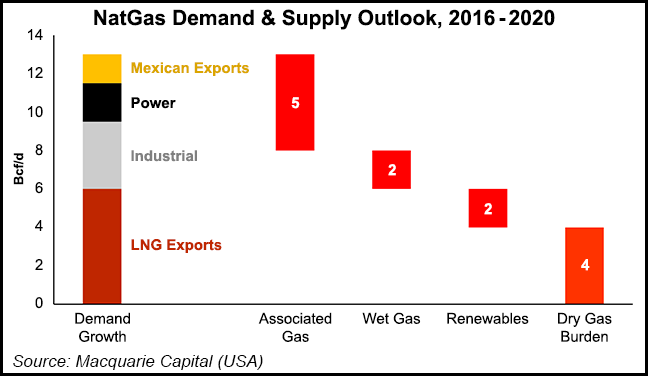 Sharing his firm’s price outlook during the LDC Gas Forum in Chicago on Tuesday, Dwivedi said the supply-demand balance points to prices in the $2.80-3.20/MMBtu range, with a lot of potential volatility. He said production growth has finally started to flatten as power burn, exports and a return to normal winter temperatures create demand growth.

“You may look at these [factors] and say, ”Wow, that doesn’t look especially bullish,’ but it actually is, mainly because it’s not as crazy bearish as it has been the last few years. A neutral or balanced view right now is looking pretty good if you’re a bull,” Dwivedi said.

The lack of natural gas production growth in 2016 has really shifted the look of the market, according to Dwivedi. After about five years of bearishness on gas, “we’re now not as bearish, and the big drivers are we’re seeing the supply’s finally stopped growing,” he said. “We’ve seen where it’s grown 4-5 Bcf/d while the rig counts were falling, while prices were falling…We think it’s not going to have that tailwind now for the bears.

“It bailed out a lot of bearish structural positions in the consumer markets, in the trading and speculator markets. If you were a bear, you could just hang on. The market was going to come your way. The production growth would bail you out. We don’t think that’s as much of a given now.”

A number of factors suggest more volatility could be on the way for gas, with liquefied natural gas (LNG) exports likely to move up and down based on global demand factors and power burn likely to vary as gas is used to backstop intermittent renewables. Meanwhile, this volatility is coming to a growing market as “the thing that dampens volatility, high-turn storage, is not growing,” he said.

While no one knows for sure how it will play out, Dwivedi said his firm sees LNG demand “cycling on and off as the global markets dictate and as the demand dictates. Obviously, if there are issues at the plants, a sudden stop and then coming back on later, this could be a big source of volatility. And we’ve already seen it. When we look at some of the Gulf Coast basis movements as a result of Sabine Pass…cycling up and down, we’ve already seen that effect, and we’re not even at 1 Bcf/d, so imagine if you had 10-12 Bcf/d of this type of demand coming on and off. We think it’ll be a big deal.”

But despite the potential for volatility, improvements in upstream efficiency and the available gas from the Marcellus and Utica shales will “put a lid on where prices go on average. We think you’re going to get a lot of volatility, but basically as soon as you get a price signal…what is that number? A specific number is too precise, but I’ll give you one anyway just for a marker. It’s about $3.20/MMBtu [on the New York Mercantile Exchange]. Around $3.20 production can really start growing, and we think that [threshold] is trending lower,” Dwivedi said.

Growth in the Marcellus and Utica is likely to remain in check in the short-term as the plays aren’t “seeing well connects, not seeing as many pipe connects, but the gas is there. As soon as the infrastructure’s available and you get a price signal, a very modest price signal” of around $2.20-2.30/MMBtu at the wellhead “you’re going to be able to produce all the gas you’ll want.”

One of the biggest variables impacting the gas market will be oil prices and the amount of associated gas that would come online with an uptick in oil drilling.

“If oil’s going to be $45/bbl or lower, you’re not going to get much associated gas…and eventually the associated gas we have will start to go into decline mode, and that puts more burden on real gas production, and you’ll actually spend money on gas…$45-50/bbl is a bit of a dead zone. It’s hard to say. Above $50/bbl and the higher you get above $50/bbl, the more associated gas will start going back into growth mode,” Dwivedi said.

There’s plenty of demand potential on the horizon to excite producers, but after factoring in associated gas, wet gas and renewables in the power sector, “what’s left is a very modest 4 Bcf/d of dry production growth required over the next four or five years, which the Marcellus has shown it can do,” he said. “It’s shown it can do that in three quarters, so you’re not going to need a lot.”

Ultimately “we don’t think we’re going to get back to a $5/MMBtu gas world. Most of the time you’re going to be in the range of $2.80-3.20, with some potentially wild moves up for some periods of time.”